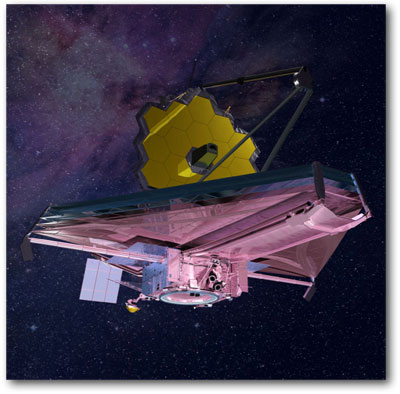 The James Webb Space Telescope (JWST) with a mirror 6.5 meters in diameter will be the next giant telescope in space, observing in the infrared range. Its launch is currently scheduled for October 2018.

In preparation for this launch, in early 2017, a call to observe with the JWST as part of the "Early Science Release" will be published as well as in November 2017 a calll for "open time" observations.

Complementary to the JWST France workshop which took place on 27 May 2016 at the Centre National d'Etudes Spatiales and to continue to prepare the French community to respond to calls to observe with the JWST, four thematic workshops and a "tools" workshop are organized at the Institute of Astrophysics in Paris (IAP) from 8 to 10 November 2016:

The JWST is a joint project with the US space agency (NASA), Canadian (CSA) and European (ESA). It will be equipped with four instruments, an imaging spectrometer sensitive to mid-infrared radiation (from 5 to 27 micrometers in wavelength): MIRI, built by a consortium of laboratories from 10 European countries, coordinated by the Observatory of Edinburgh, Scotland and the United States.

Under the overall responsibility of CNES, the CEA IRFU is the prime contractor for MIRIM, a multi-spectral imager and coronagraph associated with a low-resolution spectrometer, a key part of the MIRI instrument.

To learn more about the JWST (Astrophysics Department at CEA)