BETA is a beam optics code, using the Karl L. Brown formalism. It aims to help design of accelerators or transfer lines.

Beta is used to calculate and optimize the main features of the machine. Graphics routines allow online visualization.

-  The relevant parameters of the machine are displayed, and optical functions may be plotted;

-  If R.F. cavities or energy losses are explicitly described in the machine, BETA computes fully coupled (synchro-betatron) motion of particles. Otherwise it deals with betatron motion, with eventually horizontal-vertical coupling;

-  In the case of an electron ring, the damping partition numbers, the damping times, beam emittances, bunch length and energy spread are also displayed;

-  Effect of space charge, in a first order model, on the optical functions and on the betatron tunes.

-  Calculation of the second-order transfer matrix; the second order terms may be plotted along the lattice;

-  Calculation of the horizontal and vertical chromaticities;

-  Adjustment of the chromaticities to any value;

- Minimization of driving terms of third-order resonances induced by sextupoles;

-  Adjustment of linear tune shifts with emittances to any values.

-  Take into account the effects of a central trajectory different from the reference path.

-  Particle tracking including a Fourier analysis of the turn by turn position of the tracked particle and calculation of its frequency spectrum;

-  Simulation of random misalignments and field errors of the elements;

-  Correction of the central orbit;

-  Correction of the betatron coupling;

-  Dynamic aperture in presence of errors;

-  Analysis of sets of machines with errors.

-  Analytical treatment of the central trajectory, and its correction, in presence of random misalignments and random field errors.

The available options and their sequence, as well as the programming of the code, are guided by two ideas:

-  be able to activate them one after another to determine the importance of each level of perturbation on the machine performance;

-  Have several methods to calculate the relevant parameters of the machine if possible.

The BETA program is mainly written in FORTRAN 77, with C and FORTRAN 90 parts. The graphics and the Graphical User Interface are managed by an external thread interpreter written in Tcl/Tk. 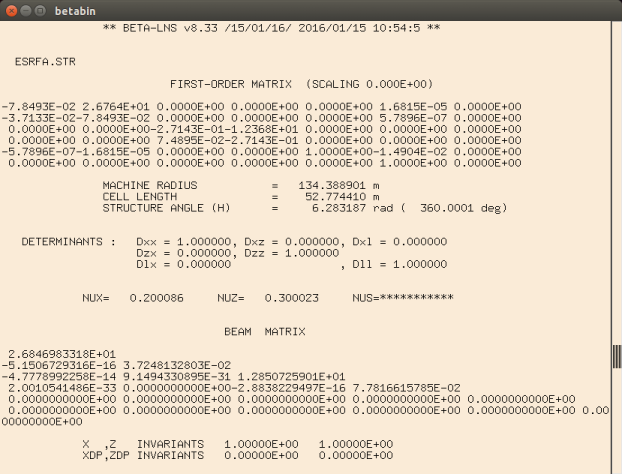 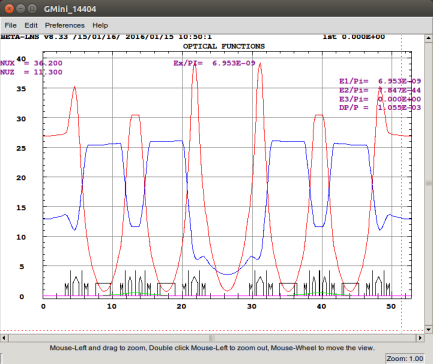 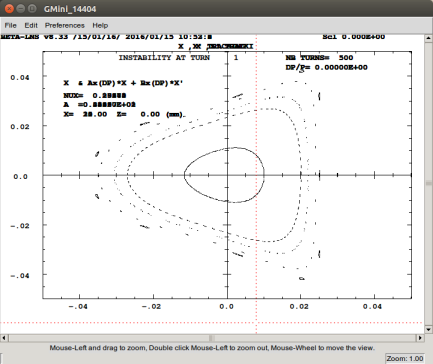