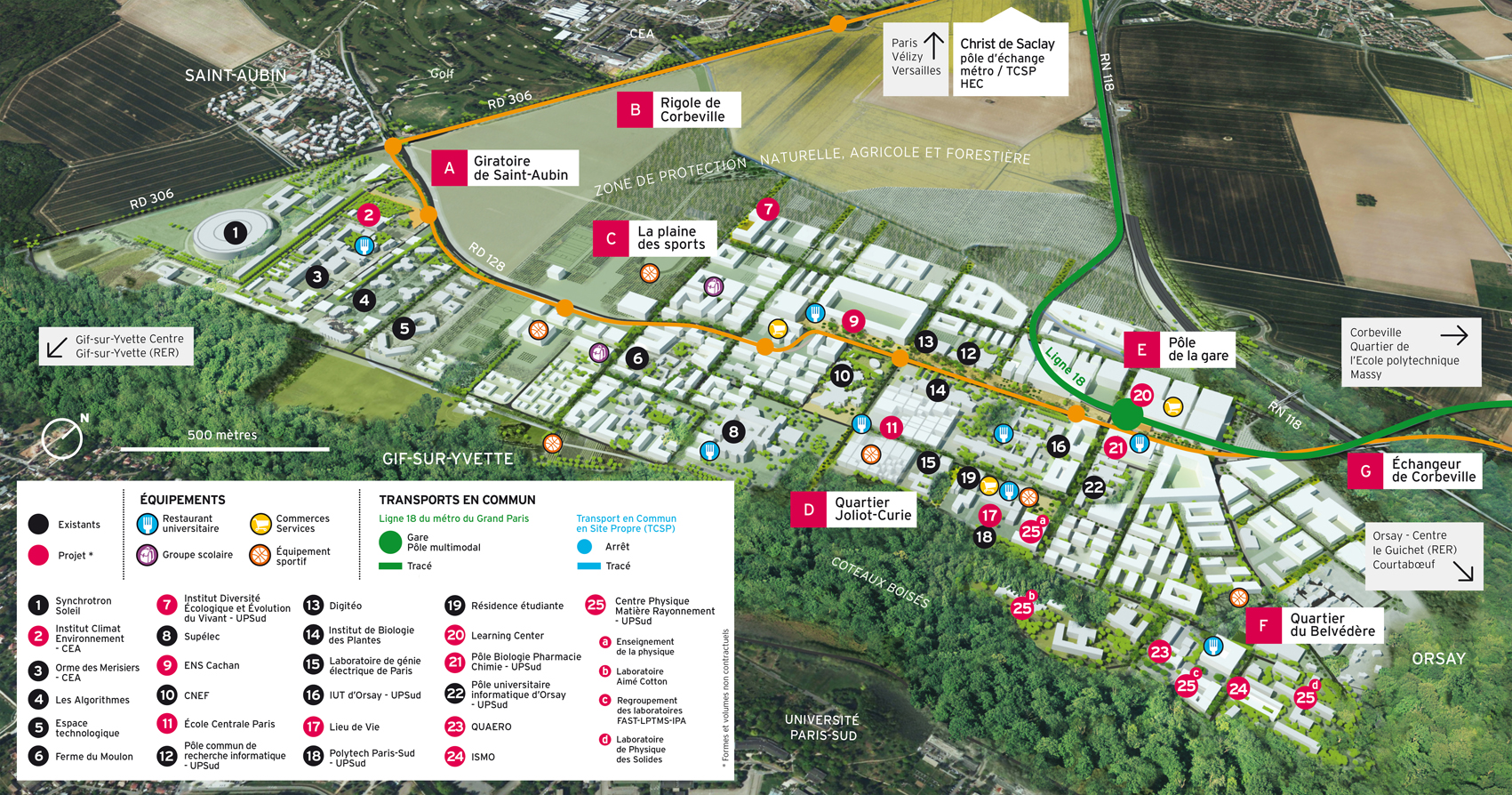 Since 2010, IRFU has been significantly involved in the construction of Paris-Saclay University. It has been in particular an active participant on the board of the Consultative Academic Council, which it chaired until the selection of the academic Senate in 2015. Similarly, an IRFU member sits on behalf of CEA on the Research Supervisory Council of Paris-Saclay University.
The institute played a driving role in the creation of the P2IO LabEx which it coordinates. The same goes for the creation of the “Physics of the two infinites (P2I)” and “Science of the Planet and the Universe (SPU)” research departments. Several researchers from the institute are directly involved in the governance of these two departments. The institute is also co-operator of the PHENIICS doctoral school and a member of the board of the Ile-de-France A&A doctoral school.. 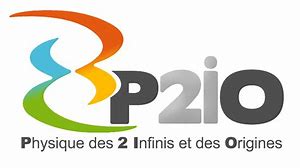 The P2IO labex, Physics of the 2 Infinites and Origins, is one of the 100 laboratories of excellence approved by the government in March 2011 as part of the Investments for the Future financed by the 2010 Great Loan. It is based on a unique concentration of world-class laboratories in the south of Ile-de-France that cover a very broad disciplinary field (particle physics, nuclear physics, astroparticle physics, astrophysics, accelerator sciences) both on an experimental and theoretical level or instrumentation and its interfaces.

P2IO has more than 1800 teaching, research and engineering staff.

It acts like any network, in a direct way, by financing a certain number of actions, and in a more indirect way, by promoting better consultation between its members and by offering a contact point for external partnerships, notably on the "Plateau de Saclay".

IRFU is represented on the steering committee of this LabEx. Since 2012, a researcher is either the coordinator or the deputy coordinator; administration is ensured by an assistant director of the institute. A significant number of research engineers took part in the various working groups structuring the LabEx, as well as in the selection committees examining responses to calls for tenders. All the actions carried out by P2IO are federative, implying necessarily, to be financed, that the teams come from several LabEx laboratories.

Other Labex have actions around Irfu themes:

It is a partnership between Earth Sciences and Physics of the Universe, which allows the development of innovative interdisciplinary projects. Its objective is to study the processes of evolution, disasters and emergence that have shaped the history of the Universe and the Earth and that govern their current dynamics.
It brings together three founding laboratories (AIM, APC and IPGP) as well as ONERA. The expertise of the four partners includes Earth and Environmental Sciences (EGP), Global Sciences (EGP, AIM), High Ene

Irfu researchers are members of this labex.

It enables La France to equip itself with a multidisciplinary laboratory, spearheading the global competition on high technology image detection in the infrared and submillimetre domains. It is based on the grouping together in Grenoble of the main European players in high technology developments. Bringing together research, industry and education, it brings together all the skills and expertise required, and it pools resources to cover the entire chain from technological design, to the production of the detection instrument, and its application in major space and groun

Irfu is a partner of this labex.

The research carried out by ENIGMASS lab partners aims to reveal the fundamental laws of physics by exploring the origin of the mass of elementary particles, the origin of dark matter and dark energy, the unification of forces, etc. It strengthens the links between their laboratories and universities, and to prepare for new challenges by building a unique centre of expertise in the Alps dedicated to basic research, training and tec

It is led by a consortium of four laboratories: LAPP, LPSC, LAPTh and LSM.

The main goal of the OCEVU labex is to build a structuring, collaborative and interdisciplinary environment w

ithin the Southern belt of France (Marseille-Montpellier-Toulouse) on scientific researches concerning the understanding of the physics of the Universe, its origins, its evolution as well as its constituents.
Collaborations between the 6 laboratories involved in the OCEVU Labex concern several topics: science, academic formation, science dissemination and outreach, technology transfer.. 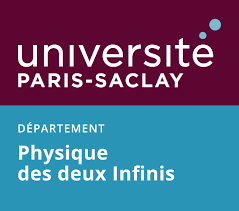 P2I teams are members of an internationally recognized research cluster (notably with TGIR such as CERN) and are committed to answering questions concerning the elementary constituents of the Universe and the fundamental laws that govern their evolution. This schematically brings together particle physics, nuclear physics, astroparticles and cosmology from both an experimental and theoretical point of view.

By drawing on its experimental and theoretical skills, the P2I Division has been able to develop, for several decades, numerous interdisciplinary activities on which it brings an often unique expertise. The original contributions of P2i teams are also recognized in related fields: material exploration, biology and environment. All these fundamental and applied activities lead to a wide range of societal benefits which can be direct through interdisciplinary thematic axes (Health and Nuclear Energy) or indirect via valorisation actions, the strengthening of business networks and links with the economic world.

In addition to its scientific objectives and the associated societal benefits, the P2i Division carries out numerous training courses and strong outreach activities.

The thematic axes of P2I are:

The IRFU division members of P2i are the DACM, the DEDIP, the DIS, the DPhP and the DPhN.

Many IRFU members are involved in the steering committee and the P2i thematic axes.

SPU Division, Science of the Planet and the Universe, coordinates and animates the Paris-Saclay research communities dealing with earth sciences and its environment and astrophysics. The scientific field of the department is divided into four main thematic:

One characteristic of the research conducted in the division is its interdisciplinarity, which generates interfaces with several other divisions, particularly in physics (PhOM, P2I, EOE, MEP). We can mention the main disciplines: physics, chemistry, mechanics, aeronomy, geology, hydrology, geophysics, environmental geochemistry, ecology, agronomy, engineering sciences, applied mathematics, elements of biology and computer science... An example of a transversal theme, at the interface with ecology and human sciences (SDV, SHS), is the environment, which is the subject of an institute project on Paris-Saclay. In the field of astrophysics, there is a strong link between cosmology and astroparticles (P2i).

In terms of tools, the scientists of the department approach the study of the Earth system and the Universe by the realization and the exploitation of data of instruments for the large observatories in space and on the ground, the realization of transverse instrumental platforms intended for the analysis of natural samples, or for the tests and tests of measuring instruments, the activities of modelling, numerical simulations, the study of analogues in laboratory.

The creation of space instruments for observing the Earth and the Universe constitutes a strong specificity of the department, which is developing a space network project on Paris Saclay.

IRFU divisions that are members of SPU are DAp, DEDIP, DIS and DPhP.

Many IRFU members are involved in the steering committee and the SPU thematic axes. 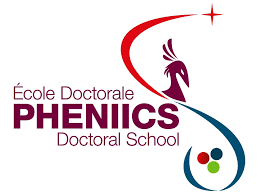 PHENIICS (Particles, Hadrons, Energy, Nuclei, Instrumentation, Imaging, Cosmos et Simulation) is the doctoral school of Ile-de-France centered around the themes of subatomic physics. PHENIICS spans  the fundamental to applied sciences, and is rooted in the unique network of world-renowed research institutes on these themes situated in the University of Paris-Saclay.

The Doctoral School A&A (Astronomy and Astrophysics of Ile-de-France) offers graduates of studies in physics and mathematics a training in, and through research in, the interdisciplinary field of astronomy and all its observation, measurement and computation techniques.

It offers physicists and mathematicians training in and through research in the vast interdisciplinary field of astronomy and all its methods of observation, measurement and calculation. It covers a field whose development is considerable and incessant: discovery of extrasolar planets, renewal of cosmology at the interface of particle physics, development of astrochemistry, in situ exploration of the solar system, space navigation, planetology at the interface with the sciences of planet Earth. Powerful observation tools are in preparation, both in space and on the ground, affirming Europe's place, calling on a great diversity of advanced technologies (optics, metrology, cryogenics, automation, etc.).

IRFU, through Ganil, also cooperates with the doctoral school PSIME.

The PSIME doctoral school has about 310 doctoral students supervised by 224 HDR. Theses are prepared within 12 Norman research units recognized by the CNRS, the CEA or the Ministry of Research. To these laboratories are added GANIL and ESITC Caen.

The objective of ED PSIME is to train specialist doctors, capable of conducting high-level scientific projects in conjunction with regional scientific forces: