DESI, the kick-off is given! The Dark Energy Spectroscopic Instrument (Desi) will analyze the light emitted by 35 million galaxies and quasars at various times in the past of the Universe and up to 11 billion years to better understand dark energy. Its move into the construction phase in 2016 crowns several years of research and development that have resulted in a solid design and a credible observation strategy. Irfu, a partner in the project from the outset, has played a key role. A look back at a year that saw the project become a reality.

A new phase begins for DESI

The construction phase of DESI was launched last summer after approval by the U.S. Department of Energy (DOE). Its installation at the 4m Mayall Telescope (Fig. 1) located at the Kitt Peak National Observatory in Arizona will begin in 2018 with the arrival of the field corrector.
The observation campaign, covering one third of the sky, will begin in 2019 and will last 5 years. It is expected to produce 10 times more data than the previous project, BOSS (Baryon Oscillation Spectroscopic Survey), completed two years ago. This final phase of DOE approval allows construction of the instrument's core components to begin. Namely, the 5000 fiber-positioning robots (Fig. 2) that will allow precise pointing of the objects whose light we want to capture - galaxies, quasars, stars - and the spectrographs powered by the optical fibers that will analyze the light collected by breaking it down into multiple wavelengths. 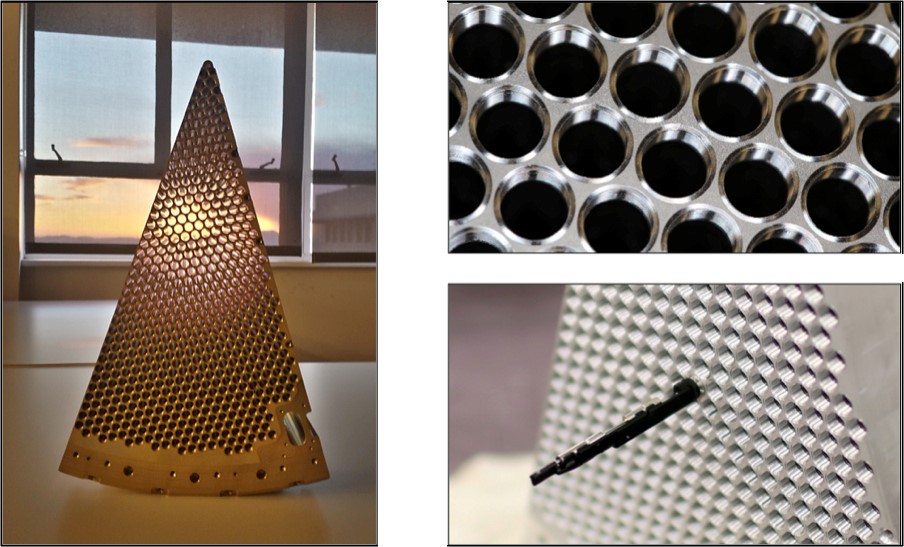 Fig 2: Photo of the first petal machined for DESI. Ten petals will be assembled to house a total of 5000 positioner robots like the one in the lower right figure. In a few seconds, each robot can rotate on itself, retract or extend to align the end of its optical fiber in the direction of the object to be observed in the sky, within a few microns (credit: J. Silber/Berkeley Lab).

The 10 spectrographs (in yellow Fig. 1) installed under the telescope will analyze the light of 5000 objects observable simultaneously at each exposure. DESI will study about 35 million galaxies and quasars in order to map the deepest Universe to date.

The accuracy of the measurements and the high number of objects accessible with this instrument will lead to the most accurate mapping of visible matter to date. It will be measured at several points in the past of the Universe up to 11 billion years ago. This mapping will not only allow us to go back to the way matter was structured in the first 400,000 years after the Big Bang, under the cross effect of gravity and radiation pressure, but also to understand the evolution of this structuring during the later history of the Universe. DESI's observations will be rich in lessons on the expansion of the Universe and thus on dark energy in particular, but also on the evolution of galaxies and on dark matter, which will not be directly observed by DESI but which can be studied through its gravitational effects on ordinary matter. Fig 3 : The first spectrograph mounted at Winlight System. The view shows the three arms of the spectrograph (red, blue and near infrared, from left to right) each ending with a cryostat containing a CCD cooled by a pulsed tube. The picture was taken during the assembly, before the installation of the pumping unit (credit: Chr. Magneville, P.-H. Carton/Irfu ).

To prepare DESI's observations, three image surveys are in progress in order to define the list of objects whose light DESI will analyze. The Irfu team involved in DESI has not only developed the algorithms for the selection of the quasars, the objects furthest from those that will be observed by DESI, but is also responsible for the definition of the lists for all the targets.

Irfu is also involved in the instrumental developments made for DESI. The transition to the construction phase was accompanied by significant progress on the essential elements of DESI during the year 2016. A four-robot prototype of the fiber positioning system was assembled and tested at the Mayall Telescope last fall. In France, the first DESI spectrograph was assembled in the fall of 2016 and is in the optical validation phase.

Its design is the result of a collaboration between the Berkeley laboratory in the United States, the optics company Winlight System (located in Pertuis, Vaucluse) specialized in the manufacture of optical equipment, the Irfu at the CEA and a group of CNRS laboratories in the Marseille region.

Irfu, a partner in the project from the outset, is responsible for the design and assembly of the cryostats that house the CDDs within the ten DESI spectrographs, as well as the system that controls their proper operating conditions. Each spectrograph has three arms for the decomposition of light in the blue, red and near-infrared, respectively (Fig. 3). The final part of each arm, a real camera, has a lens that focuses the light on a CCD maintained under vacuum and cold, within a cryostat. Irfu has chosen to equip each cryostat with its own thermal machine, a pulsed tube designed at the CEA in Grenoble and marketed by Thales.

The picture in Fig 4 shows the cylindrical body of the cryostat housing the CCD, mounted on the back side of the spectrograph (in black). In its extension emerges the long cylinder of the pulse tube compressor which allows to bring and maintain the CCD at low temperature. The small blue case attached to the compressor cooling system houses the tube servo electronics, the metal case above the compressor houses the CCD reading electronics.

Mounting the CCD in the cryostat is a delicate operation because of the tolerances required, ±15 microns at most on the parallelism of the CCD with the focal plane, a few tens of microns for the other tolerances (centering, rotation, position along the optical axis).

The assembly of the cryostats, including the integration and alignment of the CCDs, is done in a clean room, then each camera is tested (vacuum, thermal, CCD alignment check) and images (in the dark) are taken with the CCDs to ensure their proper functioning.

At the end of this validation procedure done at Irfu, the cryostats are sent to the company Winlight System, which is in charge of the construction of the spectrographs.