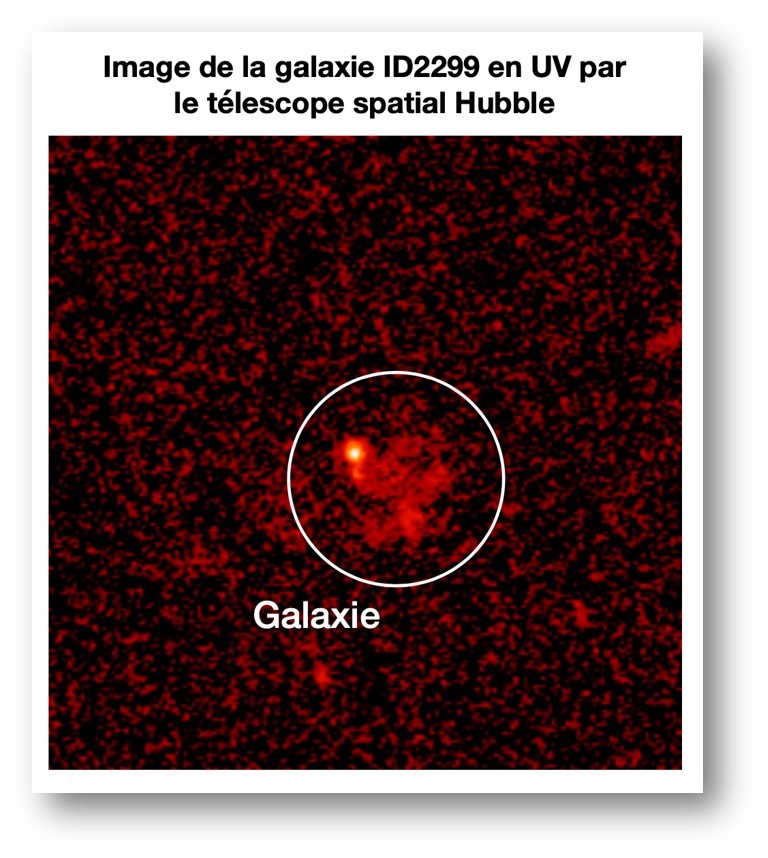 The HST (Hubble Space Telescope) image shows the light coming from young stars in the ID2299 galaxy. The morphology of the galaxy in this image is very disturbed. This is because ID2299 is the result of the merging of two galaxies. In addition, light is heavily absorbed by dust. Dust is abundant in merging galaxies. ©Puglisi et al. 2021

The ejection discovered in this galaxy implies that about half of the cold gas of this galaxy is being expelled from the system and sent into the surrounding intergalactic space (see figure). At this ejection rate, the galaxy would be deprived of the material to form new stars in only a few million years, i.e. almost instantaneously with respect to cosmological time scales.

This very important gas ejection will kill the galaxy which will become a dead galaxy no longer forming stars.

Understanding the mechanisms responsible for the death of galaxies

Most of the stars in the Universe today are located in large, extremely massive, spheroidal "elliptical" galaxies. These galaxies, which seem simple to describe, are among the most mysterious objects in the cosmos. Elliptical galaxies in the local Universe are made up of very old stars and no longer form new ones. Astrophysicists have long been trying to understand the mechanisms responsible for the death of these galaxies, i.e. the suppression of star formation in these systems. The discovery of the massive ejection of cold gas from the elliptical galaxy ID2299 could help scientists to better understand this phenomenon.

What is the reason for the exceptional ejection of the cold gas out of galaxy ID2299?

In similar situations, scientists often think that super-massive black holes, found in the heart of galaxies, were responsible for shutting down star formation in galaxies. The accretion activity on the black hole is capable of emitting large amounts of energy by producing winds that could sweep away the galaxy's gas, which is the material needed to form new stars. This feedback activity is an essential ingredient to reproduce galaxy observations with numerical simulations.  However, the extreme nature of the case of ID2299, which loses more than half of its gas, allows to exclude with confidence this 'standard' explanation at least in this case. In fact, the huge mass of the ejected gas and the ejection rate cannot be explained by the feedback winds. 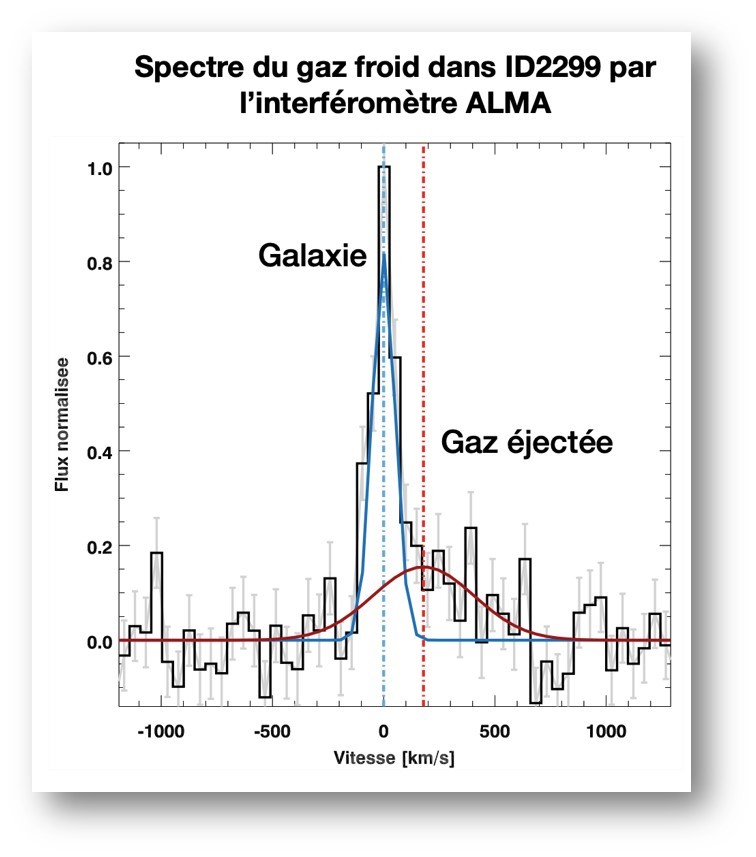 Figure 1: Spectrum of the cold gas obtained by ALMA. The main spike is associated with the galaxy, ID2299. The secondary spike is the ejected gas. © Puglisi et al. 2020 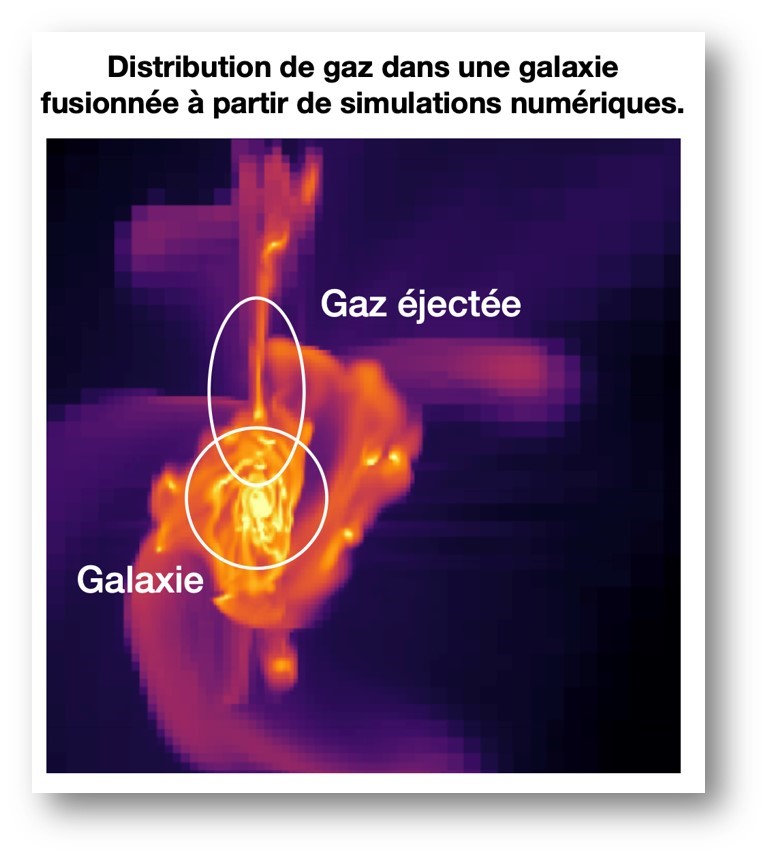 the other hand, this ejection can be satisfactorily explained by the formation of a tidal tail produced by the merger between two massive galaxies, which is in progress in ID2299. Because of this merger, the remaining half of the cold gas in ID2299 has been compressed in a dense core located at its center. This gas remaining in ID2299 is converted into new stars very quickly, at a rate about 500 times faster than in our galaxy, and will be depleted in stars in short time.

This conclusion is supported by detailed simulations of galaxies with properties similar to ID2299. Figure 2 on the left shows the distribution of the cold gas in a merging galaxy from such a numerical simulation. At this stage the former galaxies have merged in a single system. Most of the gas is now concentrated in the centre forming stars at a very efficient rate. Part of the gas is ejected from the galaxy in a tidal tail. The configuration is similar to the stage of ID2299.

Tidal tails are not exotic phenomena and are regularly observed in nearby interacting galaxies, such as the Antennae Galaxies. It is very difficult to identify tidal tails in distant galaxies, because of their low luminosity. The tidal tail identified in ID2299 is still quite rare. This discovery was only possible thanks to a large data-set from a survey with the ALMA interferometer located in Chile. This survey was designed to study the properties of cold gas in more than 100 galaxies at 'cosmic noon'. Nevertheless, the researchers have calculated that the frequency of these events is sufficient to explain the formation of a large fraction of galaxies without star formation during this cosmic era.

In conclusion, the results suggest that mergers play a central role in the evolutionary cycle of galaxies. This study also suggests that violent ejection phenomena are not necessarily due to feedback but also to mergers. However, it is very difficult to distinguish these mechanisms, which often coexist in the same galaxy, because they may have similar observational features. Previous observational results might have to be reconsidered in light of this new study.

Find on the site of the University Paris Saclay an article on the subject: