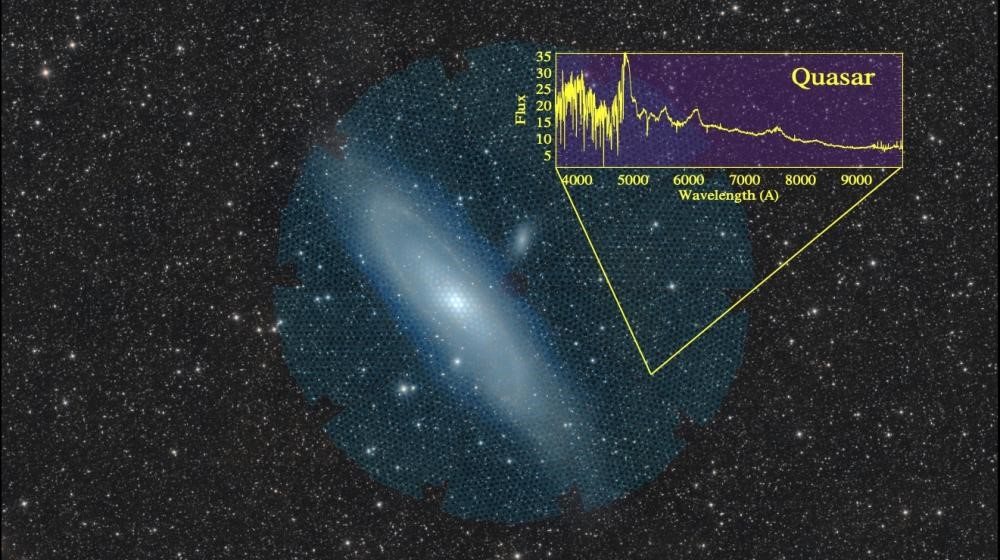 The disk of the Andromeda galaxy (M31), which spans more than 3 degrees, is targeted by a single DESI pointing, represented by the large, light green circular overlay. The smaller circles within this overlay represent the regions accessible to each of the 5000 DESI robotic fiber positioners. In this sample, the 5000 spectra that were simultaneously collected by DESI include not only stars within the Andromeda galaxy, but also distant galaxies and quasars. The example DESI spectrum that overlay this image is of a distant quasar (QSO) 11 billion years old. (Credit: DESI collaboration and DESI Legacy Imaging Surveys)

After a particularly successful first campaign of tests and measurements, the Dark Energy Spectroscopic Instrument (DESI) has just successfully started its 5-year observing program. The international collaboration, under the lead of Berkeley Lab, has the ambitious goal to carry out the largest survey of galaxies and quasars. It will be used to draw the most accurate 3D map of the Universe and to elucidate the mystery of "dark energy".
A large, five-year survey to map the Universe and unravel the mysteries of "dark energy" officially began on May 15, 2021 at the Kitt Peak National Observatory near Tucson, Arizona. To carry out its mission, the Dark Energy Spectroscopic Instrument (DESI) will capture and study light from tens of millions of galaxies and other distant objects in the Universe.

DESI is an international science collaboration managed by the Department of Energy’s Lawrence Berkeley National Laboratory (Berkeley Lab) with primary funding for construction and operations from DOE’s Office of Science.

What sets DESI apart from previous sky surveys? The project director, Berkeley Lab’s Michael Levi, answers, “We will measure 10 times more galaxy spectra than ever obtained. These spectra get us a third dimension.” Instead of two-dimensional images of galaxies, quasars, and other distant objects, he explained, the instrument collects light, or spectra, from the cosmos such that it “becomes a time machine where we place those objects on a timeline that reaches as far back as 11 billion years ago.” 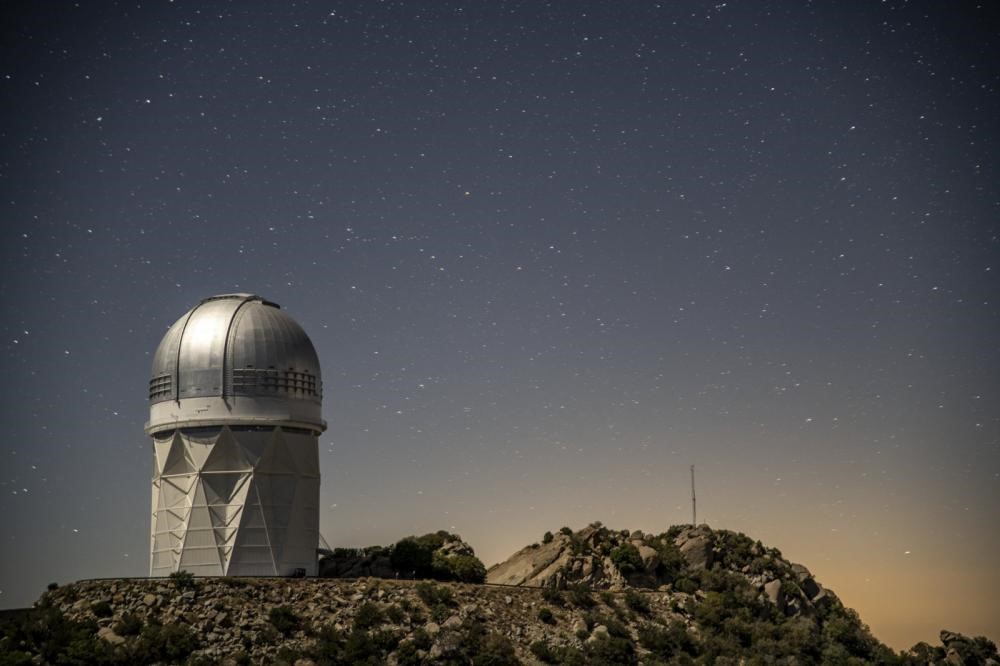 Dome of the 4m Mayall telescope at Kitt Peak National Observatory, Tucson, Arizona which is host to the Desi program that has just begun observations. (Credit: Marilyn Sargent/Berkeley Lab)

“DESI is the most ambitious of a new generation of instruments aimed at better understanding the cosmos – in particular, its dark energy component,” said project co-spokesperson Nathalie Palanque-Delabrouille, a cosmologist at France’s Alternative Energies and Atomic Energy Commission (CEA). She said the scientific program –  including her own interest in quasars –  will allow researchers to address with precision two primary questions: what is dark energy; and the degree to which gravity follows the laws of general relativity, which form the basis of our understanding of the cosmos.

“It’s been a long journey from the first steps that we took almost a decade ago to design the survey, then to decide which targets to observe, and now to have the instruments so that we can achieve those science goals,” Nathalie Palanque-Delabrouille, said. “It’s very exciting to see where we stand today.” 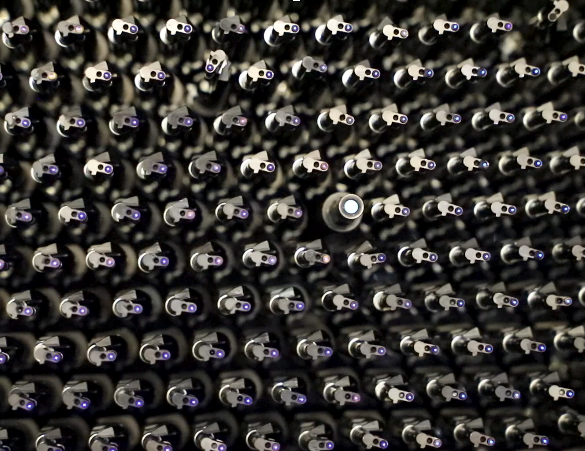 Photo of a small section of the DESI focal plane, showing the one-of-a-kind robotic positioners. The optical fibers, which are installed in the robotic positioners, are backlit with blue light in this image. (Credit: DESI collaboration) 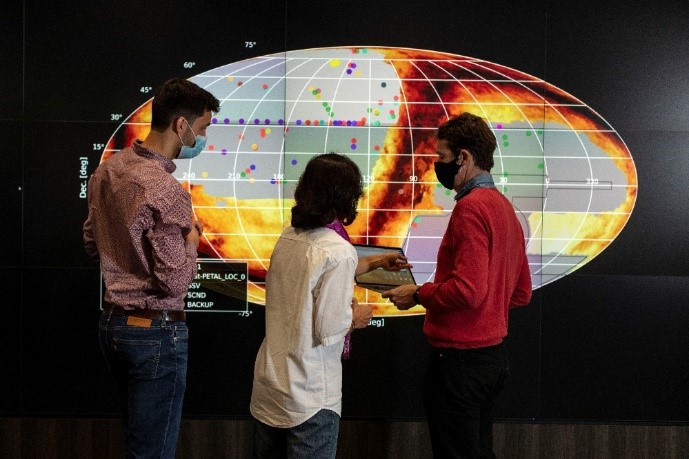 Discussion about the fields to be observed during a night of observation during the "Survey Validation" program aiming to verify that the DESI survey will be able to reach its scientific objectives. Credit: Romain Guittet / CEA

The formal start of DESI’s five-year survey follows a four-month trial run of its custom instrumentation that captured four million spectra of galaxies – more than the combined output of all previous spectroscopic surveys.

The DESI instrument was installed on the Nicholas U. Mayall 4-meter Telescope at Kitt Peak National Observatory. Kitt Peak National Observatory is a program of the National Science Foundation’s (NSF) NOIRLab, which has allowed the Department of Energy  to operate the Mayall Telescope for the DESI survey. The instrument includes new optics that increase the field of view of the telescope and includes 5,000 robotically controlled optical fibers to gather spectroscopic data from an equal number of objects in the telescope’s field of view.

In fact, the telescope “is literally pointing at 5,000 different galaxies simultaneously,” Schlegel said. On any given night, he explains, as the telescope is moved into a target position, the optical fibers align to collect light from galaxies as it is reflected off the telescope mirror. From there, the light is fed into a bank of spectrographs and CCD cameras for further processing and study.

“It’s really a factory that we have – a spectra factory,” said survey validation lead, Christophe Yeche, also a cosmologist at CEA. “We can collect 5,000 spectra every 20 minutes. In a good night, we collect spectra from some 150,000 objects. With this test campaign completed, we have passed the crucial phase of validating the algorithms for selecting the objects that DESI will observe. This is a crucial step for the success of our ambitious research program.”

Spectra collected by DESI are the components of light corresponding to the colors of the rainbow. Their characteristics, including wavelength, reveal information such as the chemical composition of objects being observed as well as information about their relative distance and velocity.

As the universe expands, galaxies move away from each other, and their light is shifted to longer, redder wavelengths. The more distant the galaxy, the greater its “redshift.” By measuring galaxy redshifts, DESI researchers will create a 3D map of the universe. The detailed distribution of galaxies in the map is expected to yield new insights on the influence and nature of dark energy.

“Dark energy is one of the key science drivers for DESI,” said project co-spokesperson Kyle Dawson, a professor of physics and astronomy at University of Utah. “The goal is not so much to find out how much there is – we know that about 70% of the energy in the universe today is dark energy – but to study its properties.”

The universe is expanding at a rate determined by its total energy contents, Dawson explains. As the DESI instrument looks out in space and time, he says, “we can literally take snapshots today, yesterday, 1 billion years ago, 2 billion years ago – as far back in time as possible. We can then figure out the energy content in these snapshots and see how it is evolving.”