The distribution of nucleons within a nucleus depends directly on the strong interaction responsible for the stability of the nucleus. The nuclei in their intrinsic frame can then be described in terms of shape, either spherical or most often as ellipsoid when a quadrupole picture is adopted. Nuclear interaction gives rise to quantum phenomena, sometimes sudden, such as a complete spatial rearrangement of the nucleons in the ground state from 59 to 60 neutrons for zirconium isotopes (Z = 40) and Strontium (Z = 38). These sudden changes illustrate the complex link between the collective properties of the nuclear system and its microscopic degrees of freedom. Their study is essential to compel nuclear models.
Up to now, the nearest isotopic chain, that of the krypton (Z = 36) studied up to 96Kr with exactly 60 neutrons, did not show this sudden transition mentioned previously. This experiment at RIKEN allowed for the first time to determine the energy of the first excited states of 98,100Kr [1] and thus to demonstrate a more gradual transition of the deformation when passing from 60 to 62 and 64 neutrons. Moreover, a new intrinsic state has been identified with low excitation energy, indicating the existence of another configuration in energetic competition with that of the ground state. Theoretical models link the presence of these states to the coexistence of two different ellipsoidal forms at low excitation energy [1].

The analysis of the data was carried out at the IPN d'Orsay, the interpretation is the result of a collaboration with the teams of the nuclear physics department of Irfu and the CEA / DAM. 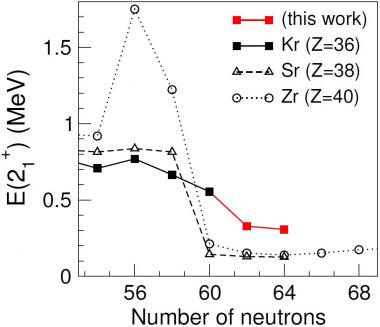 FIG. 1: Evolution of the energy of the first excited state 2+ as a function of the number of neutrons for different isotopic series. A transition from N = 60 is much more progressive for krypton isotopes. (Figure extracted from the PRL [1]).

Instruments, a target and an accelerator at the limit of current know-how


These results have been obtained from very neutron-rich nuclei produced at the Radioactive Isotope Beam Factory (RIBF) facility at the Nishina Research Center in RIKEN. For this purpose, about 150 billion nuclei of 238U per second were accelerated to 60% of the speed of light to collide with a target of beryllium. The uranium fission products created during this collision are then sorted in flight by a magnetic spectrometer and then sent to a cryogenic secondary target of liquid hydrogen of thickness 100 mm, built by IRFU / SACM.

The nuclei of interest are produced during knock-out reactions of a proton of the projectile, either 99Rb(p,2p)98Kr et 101Rb(p,2p)100Kr and identified using the magnetic selection. The signature of these reactions is also obtained measuring two protons in the time projection chamber (TPC) surrounding the Hydrogen target.  Both elements (target and TPC) were built by IRFU, within the ERC MINOS [2] project. The electronics for the data acquisition, entirely developed at SEDI, is based upon the AGET chip [3], also home built. Its characteristics have no equivalent amongst commercial samplings. This data acquisition system, for 4000 measured channels, compact and running in low noise conditions, is able to reach the whole set of the performances requested performances for this kind of measurements [4].

During the reaction, the nuclei are not necessarily produced in their fundamental state.The instantaneous decay of excited states - from which the desired spectroscopy is obtained - is detected by the DALI2 spectrometer [5] composed of 186 NaI scintillators surrounding the time projection chamber. The combination of these advanced instrumental techniques is crucial in order to study these hitherto inaccessible nuclei. 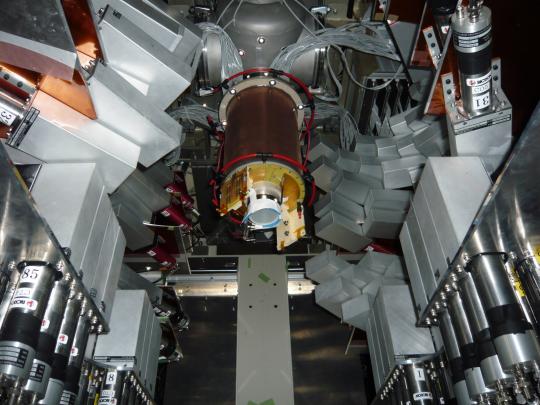 Fig.2 : Experimental set-up, The time projection chamber TPC is surrounded with the NaI crystals of DALI2 (exploded view). The liquid Hydrogen target is placed at the center of the TPC (the target cannot be seen on this picture). During the experiment, the crystals are moved to be close to the TPC, the configuration is as compact as possible. (The photograph is of the MINOS photobook of PSP-2015, copyright V. Lapoux, CEA Irfu).

-Exploration of the most exotic nuclei using MINOS (nov. 2015)
http://irfu.cea.fr/Sphn/Phocea/Vie_des_labos/Ast/ast.php?t=fait_marquant&id_ast=3661