An atomic nucleus is made up of protons and neutrons. It is qualified as magic if its number of protons Z or neutrons N is equal to 2, 8, 20, 28, 50, 82, 126. Magic stable nuclei have well-known characteristics: thus, the energy of its first excited state of spin 2+ is higher than its neighboring isotopes, so more energy is required to excite it. A magic nucleus has more stability than its neighbours. In Figure 1, the usual magic numbers for N or Z are displayed with the dashed lines and we can clearly see the "peaks" corresponding to magic nuclei.

The measurement of the energy of the first excited state of spin 2+ can therefore reveal the "magic" character of a nucleus. Beyond the indication of magic numbers, systematic measurements of the energies of the first 2+ states provide us with information on the properties of the strong interaction within the atomic nucleus. These properties are currently under-determined due to theoretical uncertainties. The evolution of the shell effects far from the valley of stability is one of the major issues in nuclear physics. Nuclei that are very neutron- rich or neutron-deficient are unstable (radioactive) and described as "exotic".
Physicists want to know if the properties associated with the known magic numbers persist in exotic nuclei or if new phenomena may appear, associated with still unknown magic numbers. Some have already been highlighted, such as the appearance of a new magic number at N=16 and the disappearance of N=20 in oxygen isotopes.

These researches require systematic studies of the evolution of the first 2+ states of the very exotic nuclei. To reveal possible changes in the usual magic numbers and extend measurements, a physics program called "SEASTAR" (Shell Evolution And Search for Two-plus energies at the RIBF) was carried out in Japan by an international collaboration led by teams from the IRFU and Riken institutes. The SEASTAR campaigns (2014, 2015 and 2017) [Seastar] aimed to measure the 2+ states of the most exotic neutron-rich nuclei. The experiments were carried out with i) the world's most intense beams of rare neutron-rich nuclei produced by the RIBF (Radioactive Isotope Beam Factory) facility, ii) the unique detection set-up combining the MINOS [Minos] device (Magic Numbers Off Stability) developed at IRFU and the highly efficient DALI2 gamma spectrometer.

What is the character of 78Ni?

78Ni was among the key nuclei targeted by this program.  It was “expected” as doubly-magic, due to its numbers of protons (28) and neutrons (50). But since it is very exotic, with fourteen neutrons more than the last stable Ni isotope, 64Ni, physicists wondered about its properties: does it have the character of a doubly magical nucleus, that is, is it difficult to excite, with an energy of its 2+ state high compared to its neighbours? This nucleus therefore represented a perfect benchmark and study case of the persistence or disappearance of the doubly magic character far from the stability.

For the reactions induced by beams of a few particles per second on the proton target, unstable nuclei are produced with a very low counting rate. MINOS was designed to increase the luminosity by combining a thick liquid hydrogen target (with thickness ranging between 10 to 15 cm; target is in blue in Fig. 2) with a vertex tracking detector, which is a Time Projection Chamber (TPC) built with the Micromegas technique (in grey in Fig. 2).

To study 78Ni, the thick hydrogen target of MINOS was bombarded with a beam of copper 79 (and of zinc 80) which induced nuclear reactions on the target protons, producing nickel 78 and two protons (three protons respectively). 78Ni can be produced in an excited state; we study the deexcitation of this state by gamma-ray emission. Since only a few 79Cu or 80Zn nuclei are produced per second, the Minos device was essential to increase the number of particles produced by the reactions. 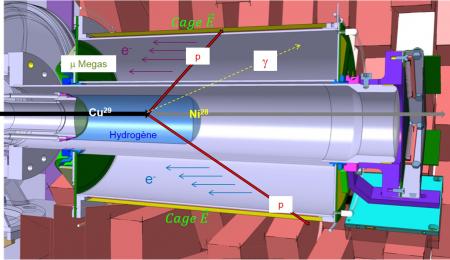 The MINOS device surrounded by the DALI2 photon detector. The thick liquid H2 target is blue, and the tracking detector is in grey. 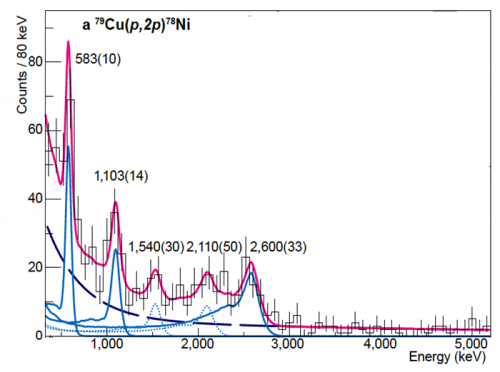 Figure 3. (From the Nature article). Gamma spectrum of the 78Ni nucleus.

The figure 3 shows the measured spectrum of 78Ni produced removing one proton from 79Cu. The transition at 2.6 MeV is identified with the decay of the first excited 2+ state.

The energy of the measured 2+ (2.6 MeV) is comparable to that (2.7 MeV) of the doubly magic 56Ni nucleus (Z=N=28). In Figure 4, we observe an increase of the 2+ energy compared to the last measured Ni isotopes, which directly proves that the numbers  N=50 and Z=28 remain magic in 78Ni. The systematics of the 2+ energies of the Ni isotopes can then be used as a benchmark to select the models.
This effect is well predicted by several recent developments of the theoretical approaches ranging from shell-models (LSSM, MCSM) to ab initio calculations (CC and IM-SRG) and also by the QRPA (Quasi-Particle Random Phase Approximation) calculations done at CEA-DAM using the Gogny effective interaction (in its D1M version).

In Figure 1, we can see the "peaks" of the doubly magic nuclei dominating: 4He, 16O, 40,48Ca and 208Pb among the stable ones; those already highlighted among the exotic ones are 24O (with the new magic number N=16), 68Ni and 132Sn. It is now proven with the study of the Nature article that 78Ni is part of this group! 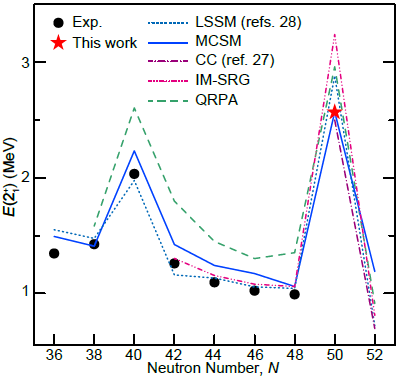 Figure 4. (From the Nature article). Systematics of 2+ states in Ni isotopes. 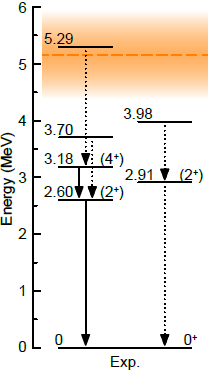 (From the Nature article). Level scheme of 78Ni.

To go further…
Additionally, a second 2+ state is observed when 78Ni is populated from 80Zn (Fig. 5). This observation provides evidence for a second deformed band and suggests a collapse of Z=28 and N=50 beyond N=50 and below Z=28. In this sense, 78Ni acts as doubly magic stronghold before deformation prevails in more exotic nuclei.

And beyond 78Ni?
By studying nuclei even richer in neutrons, deformed and weakly bound isotopes could be found, the deformation leading to a shift of the dripline (the nuclear binding limit) to heavier isotopes. To make progress and conclude on the expected disappearance of traditional shell closures, it will therefore be necessary to study the shell evolution in the vicinity of the dripline for nickel isotopes and for neighboring isotope chains (Z=27 cobalt, Z=29 copper). This will require measurements of the masses (i.e. binding energies) of the most exotic nuclei. These observables will be used as benchmarks for ab initio calculations and will thus validate our understanding of interactions and binding mechanisms far from the valley of stability.

[Minos] MINOS, acronym for Magic Number Off Stability http://minos.cea.fr   The MINOS device was developed at IRFU thanks to an ERC grant.
MINOS project page: http://irfu.cea.fr/en/Phocea/Vie_des_labos/Ast/ast_technique.php?id_ast=4450
Reactions with MINOS: http://irfu.cea.fr/dphn/en/Phocea/Vie_des_labos/Ast/ast_technique.php?id_ast=4183