The BaBar experiment running on the PEP-II accelerator at SLAC (California) has been collecting data for ten years and has recorded sufficient events to probe the most subtle aspects of the Standard Model of particle physics and quantum field theory. By analysing the behaviour over time of the B-meson particle-antiparticle pairs produced in abundance, a team of researchers including participants from IRFU/SPP has been able to demonstrate that the Universe has no preferred direction, and therefore that Lorentz symmetry, touchstone of modern physics, still holds. This original work is similar in concept to the famous Michelson-Morley experiment that demonstrated the symmetry of the speed of light.

Lorentz symmetry and the CPT theorem

In his theory of Special Relativity, Einstein revolutionised our concepts of space and time by highlighting the underlying symmetries of the world around us. The laws of physics apply equally throughout the Universe and for all observers. It does not matter whether an experiment is carried out in a laboratory here on Earth or on a distant planet, whether it is oriented to the north or to the south, or whether it was carried out three years ago, today or in ten years time. The results will always be the same. This principle of relativity guarantees that the description of an object will be identical regardless of the time it is observed, its position, direction or velocity (providing that it remains constant). Physicists sometimes refer to this invariance as Lorentz‘symmetry’, in honour of the Dutch physicist Hendrik Antoon Lorentz who first formally stated this principle at the end of the 19th century to explain the result of the Michelson-Morley experiment demonstrating the symmetry of the speed of light.

Almost twenty years ago, Alan Kostelecký suggested that this symmetry in our space-time may not be perfect over very small distances of the order of the Planck distance, the distance at which gravity, normally negligible on the subatomic scale, becomes as important as the three other forces (the weak, strong and electromagnetic forces). This introduces a preferred direction into the Universe and therefore violates the Lorentz symmetry. Kostelecký suggested a number of experiments which could demonstrate this violation of Lorentz and CPT symmetries. One of these experiments involved particle-antiparticle systems and could be performed as part of the BaBar experiment. 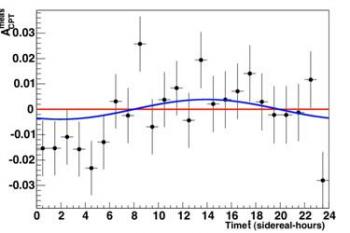 Figure 1: Asymmetry ACPT for dilepton events as a function of sidereal time. The blue curve shows the result of a fit seeking any possible modulation that would indicate a violation of Lorentz symmetry.

For the past ten years, the BaBar experiment performed at the PEP-II electron-positron collider at SLAC (California) has provided an effective laboratory for testing the symmetries in the B0 and B0 B-meson system, particles and antiparticles each composed of a pair of quarks (d quark, b antiquark, and d antiquark, b quark respectively)For example, it is possible to test the CPT symmetry by comparing the behaviour over time of two CPT symmetrical processes, B0 →  B0 and B0 → B0. This requires the study of events involving two leptons (electrons or muons) with opposite charges resulting from the decay of the B-mesons. One of the two processes is studied depending on whether the positively charged lepton has been produced first or second. The asymmetry, ACPT , can then be determined. This should be zero if the CPT symmetry holds true.

In 2006, a BaBar paper was published in the Physical Review Letter describing a method developed by IRFU/SPP physicists that concluded that there was no evidence of any violation of CPT symmetry in these meson systems. However, it would still be interesting to investigate further the ideas of Alan Kostelecký. As the theory implied the existence of a preferred direction, it seemed natural to see whether this asymmetry was always zero at all directions of B0 decay relative to an absolute reference direction. It was possible that, while the mean asymmetry was zero, the instantaneous asymmetry varied with a period equal to a sidereal day (the time taken for the BaBar experiment to return to a given position relative to an absolute reference). Figure 1 shows the distribution of the asymmetry ACPT as a function of sidereal time. The fitted curve (shown in blue) shows a slight modulation which remains statistically compatible with a zero effect (the red straight line). It follows that the famous Standard Model still holds good!

Another method, derived from the study of variable stars in the Eros experiment, has been proposed by Alain Milsztajn. This method uses a periodogram technique to sweep through a wide range of periods from a few hours to several months. This method immediately showed that the periodogram of a number of dilepton events recorded by BaBar exhibited two peaks corresponding to the solar day and week frequencies (see Figure 2). This phenomena is well known to particle physicists; data is always taken more efficiently during the night and over the weekend when the detector experts are not there … More seriously, Figure 3 shows the periodogram associated with ACPT for dilepton events with opposite charges. No significant peaks can be seen, particularly in the region corresponding to the sidereal day. This method therefore confirms the absence of any violation of the Lorentz symmetry seen earlier. 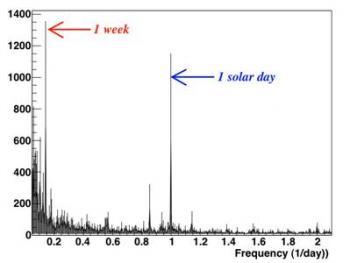 Figure 2: Periodogram based on the number of dilepton events detected. Two peaks can be seen at periods corresponding to 1/day and 1/week. 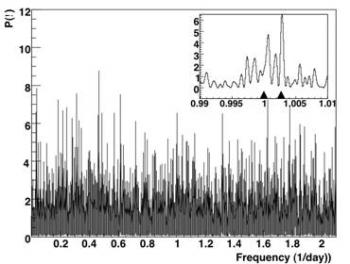 Figure 3: Periodogram of dilepton events with opposite charges. The frequencies corresponding to one solar day and one sidereal day are marked with a triangle on the insert.

This analysis, carried out in collaboration with the University of California, Irvine, has just been published in the Physical Review Letter. Even though no violation of the Lorentz symmetry was demonstrated, this study is still of interest and original as it combines techniques from both particle physics and astronomy. Finally, we would like to acknowledge that the originality of the method used owes much to Alain Milsztajn who died, at a far too early age, last summer.