Diagram of a cryomodule

The high energy part of the SPIRAL2 linear accelerator (new GANIL1 accelerator scheduled for implementation in 2012) uses two types of superconducting cavities. IRFU's Accelerator, Cryogenics and Magnetism Department is responsible for the design and development of 12 cryomodules2 of the first type, to be installed at the injector output.

On December 8, 2008, the qualification prototype cryomodule was successfully tested at full power. The superconducting cavity attained an accelerating gradient of 10.3 MV/m (million volts per meter), far greater than the specified value of 6.5 MV/m.

The main challenges involved concern the high accelerating gradients for this type of superconducting cavities (Eacc > 6.5 MV/m), the transfer of RF power to the beam via the power coupler (Pmax=10 kW), and compactness along the beam direction. During these qualification tests, the static consumption of liquid helium at 4K was measured as corresponding to 7W, which is in agreement with estimates. However, when RF power was transmitted into the cavity, dissipation rates exceeding the maximum specified value of 10W were generated.

This cavity defect was known prior to the test and does not question the validation of the cryomodule or its future use in the SPIRAL2 accelerator. 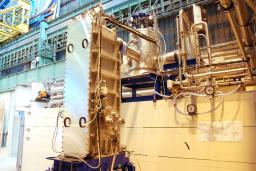 Complete qualification prototype cryomodule, ready for testing on the SUPRATECH platform in Saclay.

Scheduled for implementation in the GANIL accelerator facility in 2012, the SPIRAL2 superconducting linear accelerator will open new prospects for research on nuclear properties. It will allow the production of new stable or radioactive ion beams with higher intensities than those currently produced, providing a much wider range of radioactive ions.

IRFU teams participate in the SPIRAL2 project in collaboration with GANIL and CNRS/IN2P3 teams.
After the initial design phase completed at IRFU, the cryomodule components were manufactured by industrial partners and subsequently assembled in Saclay along with the power coupler delivered by the Subatomic Physics and Cosmology Laboratory of Grenoble (IN2P3/LPSC), the cryogenic distribution system delivered by the Nuclear Physics Institute of Orsay (IN2P3/IPNO), and the RF amplifier developed by the GANIL RF development team.