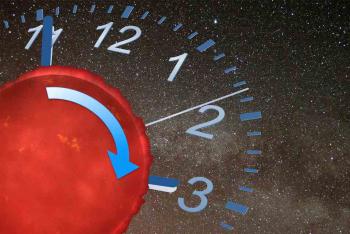 An international team of researchers, including the Astrophysical Department- AIM laboratory at CEA-IRFU, has established that the measure of the stellar ages derived from their rotation rate or gyrochronology must be revised for older stars that Sun. These stars are slowing less quickly than expected after a certain age, similar to that of the sun. This work is published in Nature on January 4, 2016.

Comparing the ages of stars obtained through two methods of calculations, seismic and gyrochronologic, scientists have determined that the rotation of the star decreases less quickly than expected from a certain age. More interestingly, they found that this age corresponds roughly to that of the current sun, which would indicate that it has entered a transition phase where its braking efficiency induced by the solar wind decreases sharply. Consequently, the laws of gyrochronology are not strictly applicable for younger stars than the Sun.

The age of the stars is one of the stellar parameters most difficult to grasp because it can not be measured directly. It is usually determined indirectly by researchers from complex numerical models made via powerful computers. This calculation is based on the initial rotation rate, a remnant of the contraction of the proto-stellar cloud, and its decrease over the life of the star because of the slowing effect induced by the interaction of the magnetic field with winds emanating from the stellar surface. For a decade, astrophysicists have managed to establish a braking law and can then infer accurately the ages of the stars from its surface rotation, this is what is called the gyrochronology law. However, this law was previously calibrated only from the observed relationship observed for the Sun and younger stars belonging to clusters (with age up to 2.5 billions years). 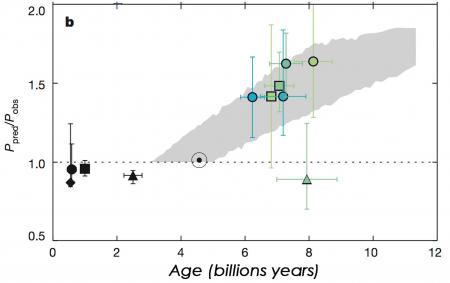 The observed stellar rotational period (Pobs) depending on the stellar age. This period is compared with the period predicted by gyrochronology (Ppred) here for 7 stars (in green) with temperature is between 5600 and 5900 Kelvin. The position of the Sun is shown by the point surrounded by a circle. For older stars than the Sun, the predicted period is systematically higher than the observed period showing that these stars slow a lower than expected slowdown.

Through asteroseismology, the study of thousands of resonant waves that pass through the stars like the Sun, it is now possible to determine their internal properties and to derive an estimate of their ages. This was done for twenty stars thanks to data provided by the NASA satellite Kepler. "Thanks to the stellar seismology, we managed to determine the age of stars much older than the Sun. We are now able to check the clocks of aging stars older than the Sun, and we realized that we need to put their record straight and give them their proper time "recalls Rafael García, researcher at CEA-IRFU.
It is by crossing their calculations by the two different methods that researchers were able to conclude that the calculation of age according to gyrochronologic method can not be applied as such for older stars than the Sun. The rotation of these stars evolve differently due to the change of their magnetism.