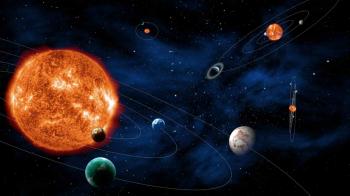 In a special issue of the international journal Celestial Mechanics and Dynamical Astronomy of November 2016, devoted to the study of the tidal interactions, two researchers from the University of Namur and the Astrophysics Division- AIM Laboratory of CEA-Irfu have computed the dynamics of short-period planets of different types orbiting low-mass mass stars. Their model is the first to simultaneously take into account the evolution over time of the structure and the rotation of the central star and its impact on the tidal interactions between stars and planets. They demonstrate that planets in a close orbit can be strongly influenced by changes in the structure and the rotation of the star that determine the survival or disappearance of the planet.

« Effects of the rotation and tidal dissipation history of stars on the evolution of close-in planets »
Emeline Bolmont [1] and  Stéphane Mathis [2]
[1] University of Namur (Belgique), [2] Service d’Astrophysique-Laboratoire AIM (CEA- France)
published in  Celestial Mechanics and Dynamical Astronomy, volume 126 (Novembre 2016), pages 275-296
for an