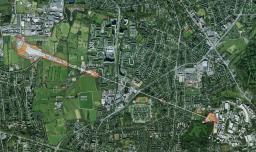 Aerial view of the E-XFEL site between Hamburg and Schleswig-Holstein. Underground facilities extend across more than 3 km.

The European XFEL project is developing a fourth-generation light source capable of producing laser flashes that are extremely bright (~ 1033 photons/s/mm2/mrad2) and ultra-short (~ 10-100 fs) from X-rays up to 0.5 Å in wavelength. The aim is to micro-photograph physical, chemical or biological structures and processes to reveal their kinetics by exposing them to an unprecedented level of light.

The heart of this instrument consists of a 17.5-GeV electron superconducting linear accelerator, 1.9 km long, shown below, being built by a consortium of European institutes, based mainly in Germany (DESY), France (CEA, IN2P3), Italy (INFN), Spain (Ciemat), Switzerland (PSI), Poland (NCBJ) and Russia (BINP). Commissioning is scheduled for 2016, with the first beams to be supplied to users in 2017.

The accelerator will use 101 identical cryomodules (see picture opposite), each measuring 12 m in length, formed by a train of eight RF superconducting cavities (1.3 GHz) followed by a quadrupole and a beam position monitor, cooled with 2 K liquid helium. Three pre-series cryomodules and 100 series-produced cryomodules have been assembled at Saclay, under CEA responsibility, by the industrial operator Alsyom, on the technical platform referred to as the “XFEL village”, a production line of seven assembly stations, most of them doubled (see illustrations below). To keep accelerator construction within the scheduled three-year deadline, DESY, CEA and the other laboratories supplying accelerator components set a production rate of one cryomodule per week across the entire production line, from component fabrication to installation in the tunnel, including integration at Saclay and testing at DESY.

XFEL cryomodules in the accelerator tunnel. 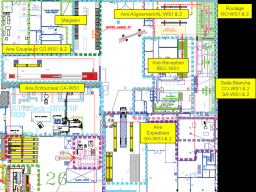 To compensate for delays that occurred in 2012 and 2013 in the production of essential components such as cavities and couplers, the project set out to reach its throughput target in four days at the beginning of 2015. Consequently, each assembly station had four days to finish its work and integration had to be completed in less than 28 days. This target was achieved and maintained throughout the year 2015. By reaching these throughput goals, 52 cryomodules were produced in 2015 and the 80th was delivered by Alsyom on December 24th, 2015 to meet a master schedule requiring shipment of the last cryomodule at the end of April 2016.

Years 2013 and 2014 were first devoted to achieving control of the integration process and equipment by CEA through fabrication of three pre-series modules, where significant difficulties were encountered in achieving certified welding of the titanium tubes forming the tank, and then in the industrial process, where it was necessary to correct non-compliant products (such as cryostats) and procedures (in coupler assembly). Production finally reached the nominal rate of weekly shipment in October 2014 with module XM15, rapidly achieving a rate of one cryomodule every four days in January 2015 with module XM25.

Through continuous improvement of assembly processes, based on field audits and fine adjustment of assembly procedures, especially in the clean room where superconducting cavities are most exposed to the dust particles the project passed a major milestone in assembly quality. Starting from module XM26, and especially with module XM55, the cryomodules demonstrated that they were able to keep the accelerator field at the performance level attained during individual qualification tests of the cavities conducted at DESY (see curve below). Never before, throughout the world, had this level of performance been achieved without degradation in an accelerator field generated at this step.

The E-XFEL project is a successful example of partnership between research laboratories and industry (mainly European firms such as Zanon, RI, Thales, Alsyom, Aperam, MecaMagnetic, Jehier®, etc…) in series production of high-tech accelerator components for the construction of a very-large-scale superconducting accelerator. CEA’s contribution initiated and carried through a unique partnership that led to industrialization of the cryomodule assembly process within its facilities, using its own equipment and tools, under the supervision of IRFU teams.