Testing of superconducting magnets for the KATRIN experiment

The KATRIN experiment (Karlsruhe tritium neutrino) is an experiment performed in order measure the mass of neutrino with sub-eV accuracy, by examining the spectrum of the electrons emitted by the beta radiation of the tritium. The tritium source is made up of an assembly of superconducting solenoids M1-M2-M3, which guide the electrons toward the spectrometer. These superconducting magnets will be powered in a series in the final experiment. The magnets have been individually manufactured and tested by Bruker. Their initial protection system was passive and based on cold diodes. However, this principle was recognized as limited for low-voltage quenches in particular, during which the magnets were not sufficiently protected. A new active protection system, using an external discharge resistor and a detection system was jointly developed by IRFU and KIT (Karlsruhe Institut für technologie).

The vertical station of building 198 of CEA Saclay, with a depth of 8 m, was used to test the magnets in pairs in a liquid helium bath at 4.2 K. In order to decrease the quantity of helium required for cooling, polystyrene foam was placed along the length of the magnet cryostats. The electrical circuit, discharge resistor and contactors and detection and acquisition system are a result of modifications to the Seht testing station.

Cold tests of the magnets in the vertical cryostat were used to check that the detection and protection systems were operating properly. First, the magnets were tested at their nominal current (314 A), both individually and in pairs. This made it possible to validate operation in a series, for large magnetic forces caused between the magnets in particular, equal to 20 tonnes. 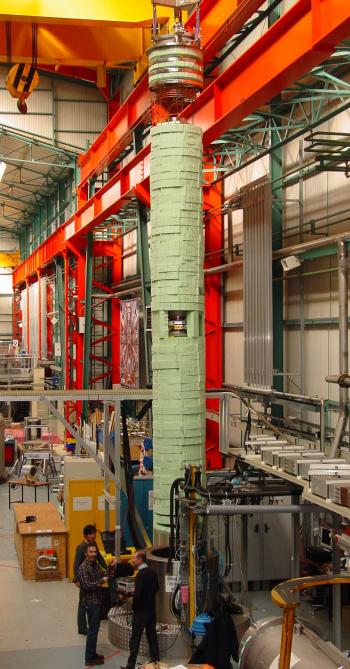 Installation of a magnet pair in the cryostat of the vertical testing station. 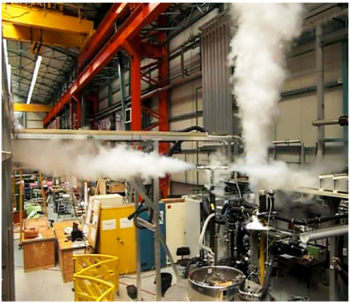 Quench caused, with discharge of helium.

Quenches were then caused by the heaters placed on the solenoids. Detection limits—for voltage and duration—were adjusted to prevent any inadvertent detection not resulting from a true transition. The test results are perfectly consistent with the simulations carried out; they show that the magnets are sufficiently protected in their serial configuration by the new safety system.

Less than one year passed the signature of the collaboration agreement and the submission of the final report for the KIT tests.