Photograph nuclear reactions in 3D to better understand them 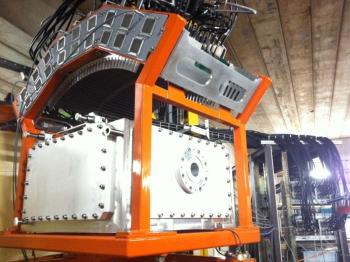 Taking a high definition picture of nuclear reactions is now possible with the new ACTAR TPC (ACtive TARget Time Projection Chamber) detector developed at GANIL as part of an international collaboration. The ACTAR TPC device fulfils two functions simultaneously: as a target and as a detector. Indeed, the gas of which it is filled constitutes the target of matter in which the incident ion beam interacts. Moreover, the ionization of this same gas, by the projectile ions and by the particles produced during nuclear collisions, makes it possible to visualize their trajectories in three dimensions and thus to "see" the dissociation of the atomic nuclei involved in the collision. The electronics developed and dedicated specifically to this type of detector, combined with a very large number of channels, makes it possible to reconstruct these trajectories very precisely thanks to the acquisition of some 8 Mega Voxels (volume elements) up to 100 times per second. In November 2017, ACTAR-TPC successfully passed the tests under the GANIL beams and will therefore be used during the 2018 experimental campaign at GANIL.

• GANIL • Institute of Research into the Fundamental Laws of the Universe