The first scientific images of the Herschel Space telescope  have just been released during a scientific conference held at Madrid (Spain) on 17 and 18 decembre 2009, only six months after launch. One the most spectacular pictures is the image of a dark cloud in the Aquila constellation revealing for the first time more than 700 condensations of dust and gas that will eventually become stars

This image is part of a major Herschel scientific program "The Gould belt survey" led by Philippe André at the Astrophysical department  of the CEA-IRFU.

For a full information : see the french version 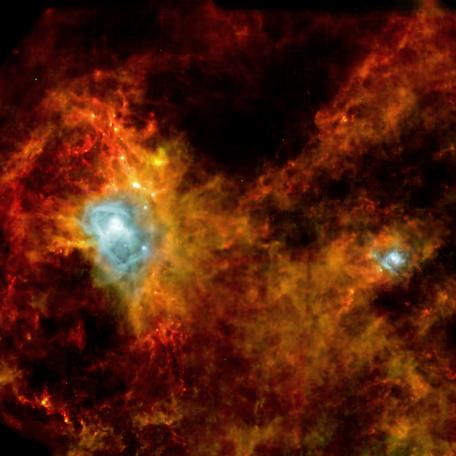 Composite image of a dark cloud in the Aquila constellation covering about 3 degrees by side, obtained by the PACS et SPIRE instruments of the Herschel satellite in the far infrared (at 75, 170 et 500 microns). The image is coded in false colours from blue to red according to the light intensity in these three filters: blue corresponds to a maximum near 75 µm (temperature over -200°C) and red to a maximum near 500 µm (temperature around -250°C). Numerous red points are visible, each revealing the presence of a forming proto-star. The two blue zones are regions where dust is heated by already formed stars. Crédit: ESA, PACS & SPIRE consortia.

for additional informations on other Herschel first scientific images  :