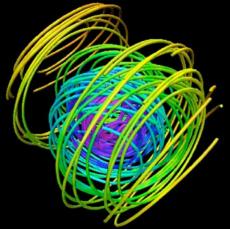 Scientists from the Astrophysical Department of the CEA-Irfu and the Bonn University (Germany) have shown that stable magnetic fields may form in the non-convective regions of the stars such as the external layers of stars more massive than the Sun as well as in the centre of solar-type stars. In these regions, the absence of strong convective motions and of the associated "dynamo" effect cannot regenerate the magnetic field. Thanks to 3D modelisation of the internal field, the scientists have confirmed that magnetic fields with a complex "twisted" structure can remain stable over time comparable to the life of stars. This important result allows a better understanding of the role of magnetic fields in the evolution of the stars as well as of the origin of the strong magnetic fields in the compact stars produced at the end of the evolution. This study is published in two articles in Astronomy & Astrophysique and Astrophysical Journal.

A surface magnetic field depending on the type of stars

Depending on the star mass as well as its evolution stage, the surface magnetic field may have a very different aspect. In the case of low-mass stars, the magnetic field is variable according to a cycle strongly correlated with the star rotation. It is the case of our Sun, considered as a low-mass star in our Galaxy, for which the magnetic field varies with a 11 year-cycle (22 years for the full cycle), resulting in the apparition and disparition of numerous dark sunspots.
On the other hand, intermediate-mass and massive stars host large-scale stable magnetic configurations, which are present over very long periods and not strongly correlated to the rotation or to the general characteristics of the star. This strongly different behaviors are linked to the way in which stars generate theirs nuclear energy that modifies the distribution of convective regions in stellar interiors.
In low-mass stars, the observed magnetism is the one associated to the external convective envelope where strong mass motions of conductive plasma induced a magnetic field by a cyclic dynamo process.
In more massive stars, this external convective does not exist and therefore the observed magnetic fields has to be produced and maintained in external non-convective radiative envelopes.

To stay stable on secular long time-scales without the dynamo effect, the scientists have demonstrated that the magnetic field  must have a complex twisted configuration (with components both in the meridional plane of the star and in the azimuthal direction), purely meridional or azimuthal fields being unstable on their own. In laboratory, such stable fields are created in engines dedicated to magnetic nuclear fusion such as the ITER project now in construction.

Thanks to the 3D-models elaborated by scientists from the Laboratoire Dynamique des Etoiles et de leur Environnement (LDEE) of the Astrophysical Department of the CEA-Irfu and the Bonn university (Germany), it was demonstrated that these fields are clearly stable on very long timescales. Indeed, they appear strongly anchored inside the stars. A observation program of massive stars performed at the Pic du Midi (France) and Canada-France-Hawaii (CFH, Hawaii,USA) observatories have confirmed that the computed 3D configurations are well in accordance with the observed surface magnetic fields of the stars.
This result will now allow the astrophysicists to realize complete and realistic modelisations of magnetic fields in non-convective stellar regions. This is particularly crucial to undertand the origin and behaviour of the magnetic fields observed inside the very dense stars of the Galaxy. These compact objects (white dwarfs, neutron stars) result from the collapse of a stellar core when the star has exhausted its nuclear fuel. The resulting magnetic field arises from the trapping of the  magnetic flux after stellar formation or an initial dynamo phase and is therefore strongly linked to the original fossil field. 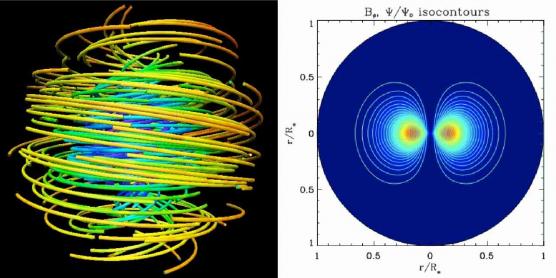 Twisted stable magnetic configuration inside non-convective stellar regions. Left: the configuration seen in 3-D. Right: central section of the field : the meridian field is tangent to the field lines (in blue) while the field azimutal intensity is shown by the color table, increasing from blue (O Gauss) to red (10 000 gauss). Crédits Duez / CEA Sap