Looking inside the stars

Red giant stars are a particular stage of stellar evolution, when fuel having been exhausted at the centre, nuclear reactions move to outer layers. The star then swells and becomes giant. The Sun will undergo this transformation in approximately 6.4 billion years, its current size will be then multiplied by more than 60 so that its surface will be almost four times closer to Earth.
Oscillations in red giants were already studied for the first time in 2009, thanks to the French CoRoT satellite. But those waves only propagates in the outer layers of the stars. These so-called acoustic waves - similar to the sound waves that propagate in the air – travels hundreds of thousands of kilometres inside the stars. But, they are unable to penetrate to the layers where the stellar material becomes too dense. They are refracted and they return to the surface. 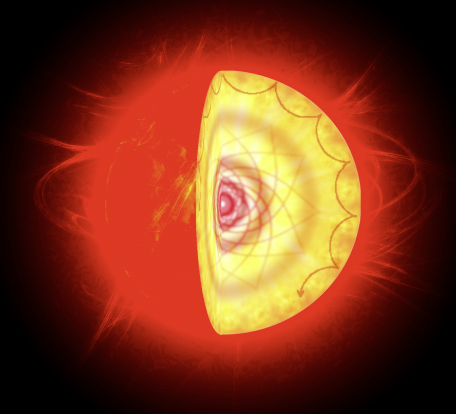 The red giant star KIC 6928997 observed by the Kepler satellite revealed, for the first time, a new type of waves, the so-called mixed waves. They are a mixture of acoustic and gravity waves. These gravity-like waves are similar to the waves at the surface of the oceans. In stars, they penetrate deeply in the interior, reaching in some cases their cores. With this discovery, it becomes now possible to measure the internal parameters of a star, a dream for the astronomers who until now were simply constrained to analyze the outside layers.
"This is a real revolution in stellar physics. This star is the top of an iceberg, we expect to have many new results on hundreds or even thousands of stars like the Sun and red giants" says Rafael A. Garcia, a member of KASC, the scientific consortium organized to make the asteroseismic studies on Kepler. He continues saying: "in fact we are as a doctor who studies the development of a baby of a pregnant woman, or as seismologists using earthquakes to probe the interior of our planet. We can now, with stellar seismology, see inside the stars".

Asteroeismology is a complex technique which measures small changes in brightness at the surface of stars and their periodicities to isolate the different waves that make up these variations. Like a sound that can be parsed to extract the notes of music composing. The first results were initialy obtained on the nearest star, the Sun. This technique of Seismology became a true European specialty, thanks, for example, to the GOLF instrument aboard the European satellite SoHO and also thanks to the results provided by the French CoRoT satellite, in orbit since late 2006.
The Kepler satellite launched in March 2009 was not designed specifically to perform seismology studies of stars but for the search for extrasolar planets. Indeed, it was a large European Consortium who proposed to do such a research to NASA, the US space agency, studies that today are revolutionizing our vision of stellar evolution. 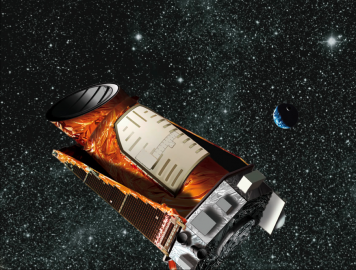 The Kepler asteroseismic Science Consortium (KASC) includes today nearly 440 researchers [1]. Observations made by the US satellite Kepler arrive to the Kepler Asteroseismic Science Operations Center (KASOC) at the University of Aarhus in Denmark. Then, they are corrected for some instrumental effects using algorithms developped by Rafael A. Garcia at the Astrophysical Department (SAp) of CEA-Irfu and based on the procedures developped for the calibration of the instrument GOLF on board SoHO. Thus, the processed data are then again sent back to KASOC and from there redistributed to researchers all over the world. The Kepler satellite will continue its mission of exploration of the sky until at least 2013, and is promising many future spectacular results…

[1]   The Kepler asteroseismic Science Consortium (KASC) is an international team of researchers with an important contribution from European laboratories including  the University of Arhus (Danemark), Astronomical Institute of Leuven (Belgium), the University of Birmigham (U.K.), the Paris-Meudon Observatory (LESIA-Meudon, France) and the Astrophysical Department of CEA-Irfu. Funding for the Kepler Mission is provided by NASA's Science Mission Directorate. The authors acknowledge the work of the team behind Kepler.