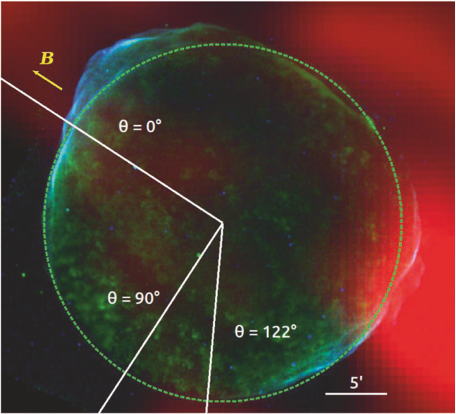 The origin of Galactic cosmic rays, their energy source and their acceleration process raise many questions more than 100 years after their discovery by Victor Hess in 1912. What are their sources of acceleration and energy? What are the acceleration mechanisms and their properties?
If these are not the only sources considered, strong shocks in supernova remnants constitute one of the privileged places of acceleration which allows the acceleration of particles by the mechanism of diffusive acceleration. Moreover, if a fraction of 10-20% of the shock kinetic energy is tapped to accelerate the particles, the supernova rate in our Galaxy can account for the energy required to maintain the Galactic cosmic ray population.
X-ray observations, on the other hand, have the advantage of being able to finely map the acceleration locations. And, of major interest, they provide information on the properties of both the thermal plasma heated to millions of degrees and the non-thermal plasma of electrons accelerated to very high energies of the order of teraelectron volts. They thus offer keys to the understanding of shock acceleration mechanisms, and specifically of their feedback and their dependence on the magnetic field.

An international team, including a researcher from the Astrophysics Department/AIM Laboratory of CEA-Paris Saclay, has just published in Nature communication a paper on the acceleration of particles in the thousand-year-old supernova remnant SN 1006. These results bring a new step to the understanding of the origin of Galactic cosmic rays and the conditions of their acceleration at the shock in the remnants of young supernova. They highlight the feedback of the particle acceleration on the shock properties, where the magnetic field is almost parallel to the shock velocity. The study of the properties of the matter along the shock by spatially resolved X-ray spectroscopy, carried out with the Chandra and XMM-Newton observatories, reveals indeed an azimuthal evolution of the density compression ratio at the shock that depends on the orientation of the ambient magnetic field. This profile is consistent with recent state-of-the-art hybrid numerical simulations of shock, which reproduce the diffusive acceleration by quasi-parallel shock, and take into account the amplification of the magnetic field and the dependence on the obliquity of the magnetic field. The data are reproduced by the model for a total acceleration efficiency of 18% (12% due to freshly accelerated ions and 6% re-acceleration of existing cosmic rays), and for 5% pressure due to the amplified magnetic field. A signature of this model is that it takes into account the post-cursor, decoupling of the velocity of the magnetic field and the accelerated particles, with that of the thermal fluid, which results in increasing the compression ratio and making the spectrum of accelerated particles steeper, in agreement with observations.

Supernova remnant of SN1006. On the left, composite X-ray image in the 0.5-1 keV (green) and 2.5-7 kev (blue) energy bands, dominated respectively by thermal emission from gas heated to millions of degrees, and by synchrotron emission from electrons accelerated to TeV energies. In red, the HI absorption density column. The position of the shock is symbolized by a green dotted circle. B represents the ambient magnetic field and Θ, its inclination. On the right, the azimuthal profile of the compression ratio derived from the Chandra and XMM X-ray data, and the acceleration model in black solid line (12% pressure due to freshly accelerated ions, 6% due to re-acceleration of existing cosmic rays, and 5% pressure to the amplified magnetic field). For illustration, the dashed model is without acceleration of pre-existing cosmic rays, and the dotted one is without magnetic field amplification and post-cusor.

The shock properties observed in the SN1006 supernova remnant are thus reproduced in a new paradigm for diffusive shock acceleration, which highlights the dependence of the acceleration efficiency on the obliquity of the ambient magnetic field, the role of cosmic ray re-acceleration for higher obliquity (> 45°), and the role of the post-cursor on the shock compressibility and the slope of the spectrum of accelerated particles. A next step will be to search for these signatures in other supernova remnants.