The first Astronomical image taken by a new generation of camera called "ArTeMiS-1" were obtained with the APEX telescope in March 2007, at Chajnantor in Chile. This bolometer camera operates in the "submillimetre" domain, between the infrared and the millimetre waves, where the cold objects of the Universe emit most of their energy. The camera is based on the technology developed at the Service d'Astrophysique of CEA/DAPNIA, and LETI/LIR at CEA/Grenoble for the Herschel Space Observatory. This successful astronomical observation is the first step toward regular astronomical observations to study star formation throughout the Universe.

The project ArTéMiS aims to develop astronomical cameras operating in the spectral window between the infrared and the millimetre waves (200-450 µm). A submillimetre imager on a ground-based telescope is fully complementary to the major submm astronomy facility in the course of the next ten years: the Herschel Space Observatory, a far-infrared and submm-wave (60-670 µm) 3.5-m telescope in Space and ALMA, a 50-antenna mm-wave (350 µm-1 cm) interferometer in Chile.
Thanks to a its large field of view and extreme sensitivity Herschel will have the ability to carry out large-area imaging surveys of both the distant Universe and the nearby interstellar medium in our own Galaxy. ALMA will make possible ultra deep searches for primordial galaxies, as well as detailed kinematical investigations of individual protostars. Despite being the largest Space telescope ever built, Herschel will suffer from its relative moderate angular resolution given the size of its mirror, implying a fairly high extragalactic confusion limit and preventing the study of individual protostars in all but the nearest star-forming clusters of our Galaxy. ALMA on the other side will suffer from a small field of view (~20”), making extensive wide-field mapping studies impossible given the amount of time necessary to cover large areas corresponding to star-forming clouds and representative fields of primordial galaxies.

Beside Herschel and ALMA, ArTéMiS on a large (>10 m) single dish telescope will provide (1) a better angular resolution (~4’’) than Herschel around 200 µm and (2) a wider-field mapping capabilities than ALMA. With the current advent of new, relatively large (>10 m) aperture telescopes (e.g. APEX), ArTéMiS would open new scientific prospects in complement to the Herschel Space Observatory objective. 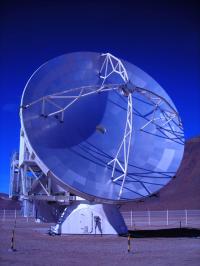 Photography of APEX (credit V. Minier), a 12-m ALMA-like antenna located at 5100 m over the sea level at Chajnantor in the Atacama Desert, Chile. APEX is run by a consortium including MPIfR (Germany), Onsala Space Observatory (Sweden) and ESO.

The first astronomical image was taken in March 2007 on the APEX telescope with the prototype camera of ArTéMiS (P-ArTéMiS) during a dedicated  ESO technical run. The image below exhibits the emission from cold dust grains that co-exist with molecular gas in the natal cocoon of stars. The ArTéMiS team selected NGC 6334 as target, which is a well know high-mass star-forming regions in the Southern Hemisphere. It had previously been observed with James Clerk Maxwell Telescope. Two bright sites are clearly detected; they are sites where high-mass stars currently form. 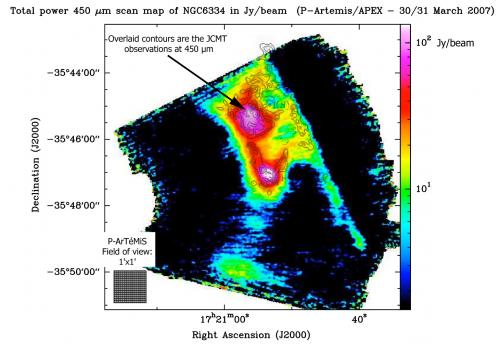 First image of a star-forming region with P-ArTéMiS of NGC 6334 at 450 µm. This star-forming region was scanned by the P-ArTéMiS camera (an array of 16x16 pixels) in March 2007. The field of view of the camera (1x1 arcmin) is shown in the lower left corner of the image. Two massive protostars, NGC 6334 I and NGC 6334 I(N), are clearly detected (white points with red contours). One of them, NGC 6334 I(N), located in the upper part of the image, corresponds to a very early phase of evolution (the so-called "class 0") and is clearly visible only in the sub-millimetre range. The scale on the right shows the intensity of the detected signal. The overlaid contours are the observations of the same object obtained with the JCMT (Sandell 2000).
Thanks to its high scanning speed, ArTéMiS will be able to take detailed images of relatively large structures in a short time. Already with P-ArTéMiS, the map of NGC 6334 has been extended and new structures are detected compared to previous results with JCMT. The full NGC6334 complex (200 times larger in area than the above map) will be imaged in the very near future by the space observatory Herschel, bringing complementary scientific informations on this stars forming region. (Crédit: CEA/SAp)

This result clearly demonstrates that grid bolometers based on the technology developed for the Herschel-PACS space project can be operated on ground-based telescopes at 450 µm. ArTéMiS has thus successfully passed its first commissioning phase. A first study of star formation sites will be performed at 450 µm and possibly at 200 µm with P-ArTéMiS under ESO allocated visitor time on APEX at the end of 2007. These preliminary investigations will be conducted in close relationship with the objective of the Herschel Guaranteed Time Key programmes on Star Formation in the Milky Way, in nearby galaxies and in high-redshift galaxies.

ArTéMiS and P-ArTéMiS projects are funded through the ANR, the French National Research Agency, as well as the PNPS and PCMI/CNRS funding schemes.