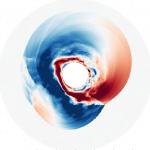 At the end of its life, the iron core of a star at least ten times more massive than the Sun collapses under its own weight. In less than a second, the iron core of 3000km diameter contracts into a ball of neutrons of a few tens of kilometers. A shock wave is formed and stalls at a radius of about 150km while the collapse of the stellar envelop continues. The huge amount of gravitational energy released in the contraction is carried away by neutrinos that heat up the matter below the shock. The explosion sets in when the deposition of energy is sufficient to stop the collapse and revive the shock wave. The success of the explosion and the formation of a neutron star is possible only if this heating phase is short enough, in the order of a second. Otherwise, the neutron star becomes too heavy and eventually collapses into a black hole. Several numerical simulations have already established the importance of a multidimensional dynamics against models considering spherical symmetry. Transverse motions increase the heating time of mater and facilitate the onset of the explosion.

An instability to trigger the initial impulsion

Since 2003, specialists study the role of an instability named SASI (Standing Accretion Shock Instability) which induces global oscillations of the shock wave. This instability may trigger the explosion by generating transverse and convective motions which slow down the fall of the stellar envelop towards the neutron star and consequently increase the efficiency of the neutrino heating. The oscillations of the shock wave generate an asymmetric explosion, even for a spherically symmetric massive star. SASI oscillations communicate a kick to the neutron star such that its velocity can be ten times higher than the one of its progenitor.

Period of rotation of neutron stars

SASI can also be dominated by a spiral mode which makes the shock wave rotating. In the case of a non-rotating massive star, this spiral wave separates the matter below the shock in two regions with opposite angular momentum. The internal region counter-rotates compared to the shock and imprints a rotation to the neutron star. This study enables to characterize the conditions for the emergence of a spiral mode in order to assess the robustness of the mechanism. A spiral mode is able to dominate the dynamics in a few tens of milliseconds if the size of the region below the shock is large enough. Otherwise, the instability favors a global oscillation of the shock wave that cancels the angular momentum redistribution. The size of the region below the shock is smaller for more massive progenitors. In those cases, the dynamical pressure exerted by the collapsing matter is more efficient at confining the shock wave. These results were obtained by employing numerical simulations of an idealised model of the dynamics generated by SASI in the equatorial plane. The distribution of initial pulsar spins, ranging from a few tens to a few hundreds of milliseconds, is marginally compatible with a fast period, of about 10 milliseconds, estimated considering the angular momentum conservation during the collapse of the iron core. This study enables to identify a range of progenitors for which the action of SASI can explain the initial rotation rate of neutron stars generated.

The next step will consist in studying the effect of the rotation of the progenitor, an aspect which is not considered in the present study.

" New insights on the spin-up of a neutron star during core-collapse. "
R. Kazeroni, J. Guilet, T. Foglizzo
published in the journal Monthly Notices of the Royal Astronomical Society (MNRAS), 2016,  456, 126.
Accès to the à electronic version of the publication