Indirect detection of cold gas around distant galaxies in formation.

An international team including two researchers from the Department of Astrophysics-Laboratory AIM of CEA-Irfu detected for the first time the presence of the CH+ molecule in distant galaxies of the young universe, thanks to the large ALMA interferometer. The presence of this particular molecule demonstrates the existence around the young galaxies of large turbulent reservoirs of low-density cold gas. Their presence could explain how galaxies succeed in prolonging their phase of intense stellar formation despite the ejection of matter induced during the explosions of stars. These results are published in the journal Nature of 30 August 2017.

Forming stars in the first galaxies

Most of the stars and galaxies observed today were formed when the Universe had only 10% of its present age, i.e. 1 to 2 billion years. This process is theoretically determined by streams of primordial matter toward the galaxies, and by the ejection of matter by the explosions of massive stars in galaxies, called "supernovae". Nevertheless, only matter ejections have been observed to date and the properties of the inflows of primordial matter remain hypothetical.

The research team used the ALMA interferometer to study the CH+ molecule in six distant galaxies of the young Universe. Observed so far only in close systems, the CH+ molecule makes it possible to detect gas even at low density, especially if this gas is turbulent and included shocks. CH+ emission has been found particularly intense around the primordial galaxies, showing the existence of massive gas reservoirs surrounding the galaxies. The reserve of this circumgalactic gas is several times the radius of the galaxies themselves and could contain several times the mass of gas contained in the individual galaxies. 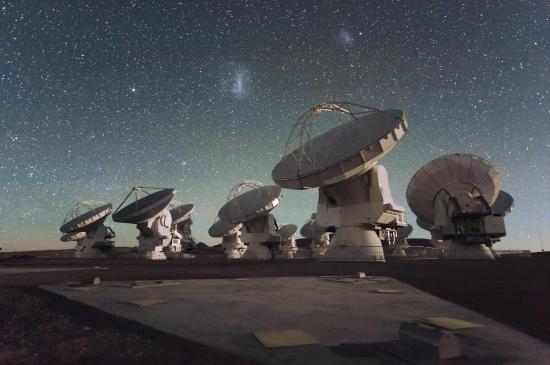 The large millimeter / submillimetric antenna network of the Atacama (ALMA), at 5000 m altitude on the high plateau of Chajnantor, in the Chilean Andes. The main network comprises fifty antennas of 12 meters in diameter, used together as a single telescope - an interferometer. ESO credits

"The presence of the CH+ molecule teaches us that energy is stored in powerful winds produced by galactic-scale star explosions and gives rise to turbulent motions in previously unseen reservoirs of cold gas surrounding the galaxy, "says Edith Falgarone, the lead author of the study. "By driving turbulence in the reservoirs, these galactic winds extend the starburst phase instead of quenching it.”

According to Frédéric Bournaud of the Department of Astrophysics-Laboratory AIM who was one of the researchers that promoted the ALMA observations: "These results challenge a fundamental element of galaxy formation theories, which usually consider that the winds of matter ejected by supernovae are definitely lost to the galaxies. On the contrary, they could feed the massive and turbulent reservoirs highlighted by our observations and thus allow the formation of new generations of stars."

In particular, this scenario explains why these so-called "starburst" young galaies, that have a star formation rate  more than 100 times higher than current galaxies, can continue to form stars at this high rate for more than one 100 million years. 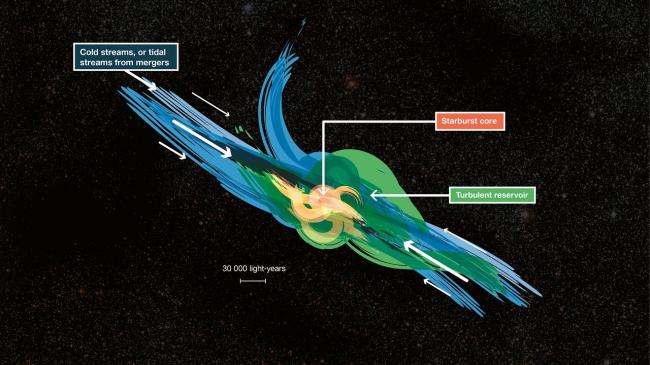