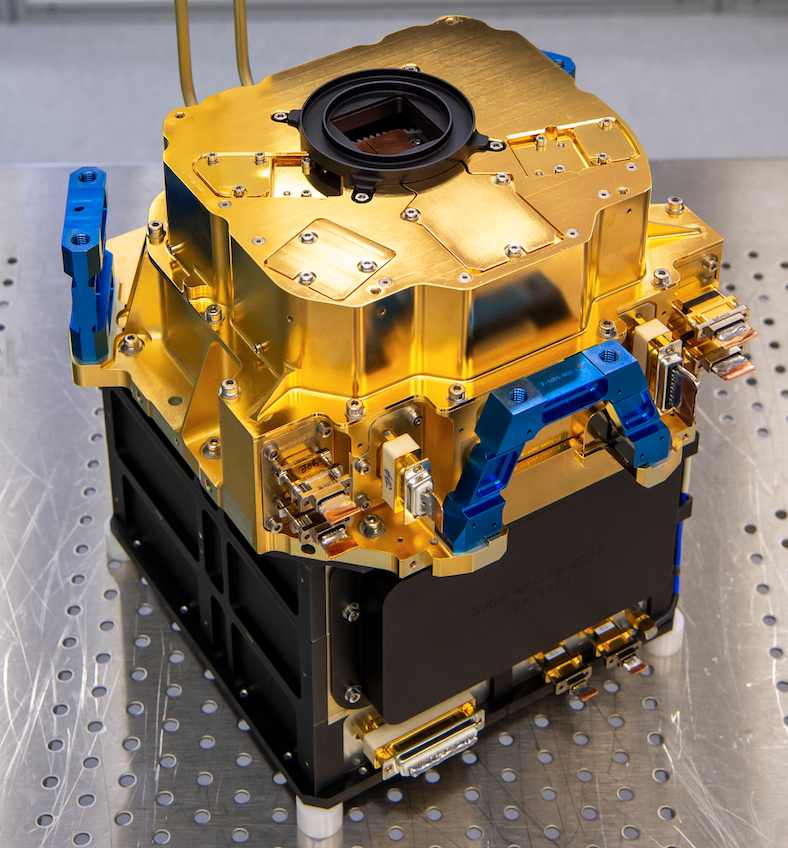 An X-ray camera, intended to equip the Sino-French SVOM satellite, has just been assembled and delivered by scientists and technicians from the Institute for Research on the Fundamental Laws of the Universe (CEA/Irfu). This high-tech prototype will capture high-energy photons (X-rays) emitted during the explosion of massive stars or the fusion of dense stars. The camera, particularly compact and innovative, integrates in a very limited volume, a complete detection chain, an active thermal control and a filter wheel. It will be placed at the focus of a telescope 1.15 m long to form the MXT (Microchannel X-ray Telescope). With a field of view of 1 square degree, for only 35 kg of mass, the MXT telescope, equipped with an original "faceted" optics inspired by lobster eyes, will make it possible to locate the position of the most powerful cosmic explosions in the Universe with a precision better than 2 arcmin. After various tests, including a calibration campaign in Germany, the assembly will be shipped to China in November 2021 to be integrated into the SVOM satellite, which is scheduled for launch at the end of 2022.

See : Timelapse of the MXT camera assembling in cleanroom

The MXT telescope (for Microchannel X-ray Telescope) is one of the four instruments of the Sino-French satellite SVOM (Space-based multi-band astronomical Variable Objects Monitor) whose objectives are the detection, precise localization and tracking of the most powerful explosions in the universe also called "gamma-ray burst". These explosions are in fact signaled by a very brief emission of gamma rays, the most powerful form of light. The very short duration of the gamma explosion (often only a few seconds) requires a complex strategy to study them. Gamma radiation is first detected and localized by the ECLAIRs and GRM instruments, but it is thanks to the precise position obtained in X-rays by the MXT telescope (and in visible light by the VT instrument) that the SVOM alert can be fully exploited by ground telescopes which will be able to follow the evolution of the burst with larger optics. 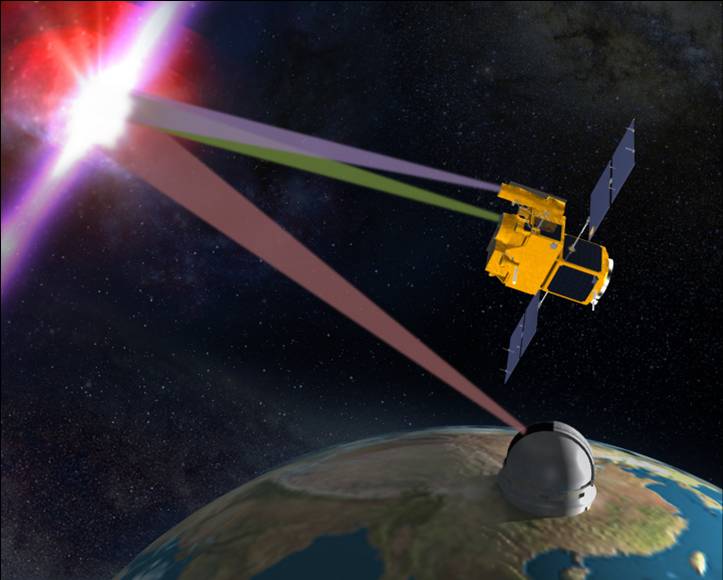 The MXT telescope is equipped with a revolutionary optics called "lobster eye" because it has multiple channels similar to the facets of crustacean eyes. These microscopic channels (40 µm side) are assembled to form a mosaic of plates, each containing approximately 600,000 facets. They are coated with iridium to increase their x-ray reflectivity and the entrance surface is coated with a thin layer of aluminum to block visible light. This original geometry makes it possible to provide a wide field of vision of 1 square degree (4 times the apparent surface of the Sun), with a uniform sensitivity for an effective surface of 25 cm2 and a reduced mass of approximately 2 kg. This optic, similar to the pupil of the eye, focuses the X-rays on the camera which constitutes its sensitive retina.

MXT is developed in France by CNES and CEA-Irfu and and the IJCLab (Irène Joliot-Curie Laboratoire de Physique des 2 Infinis) under the scientific direction of Diego Gotz, in close collaboration with the University of Leicester in the United Kingdom and the Max-Planck Institut für Extraterrestische Physik in Garching, Germany 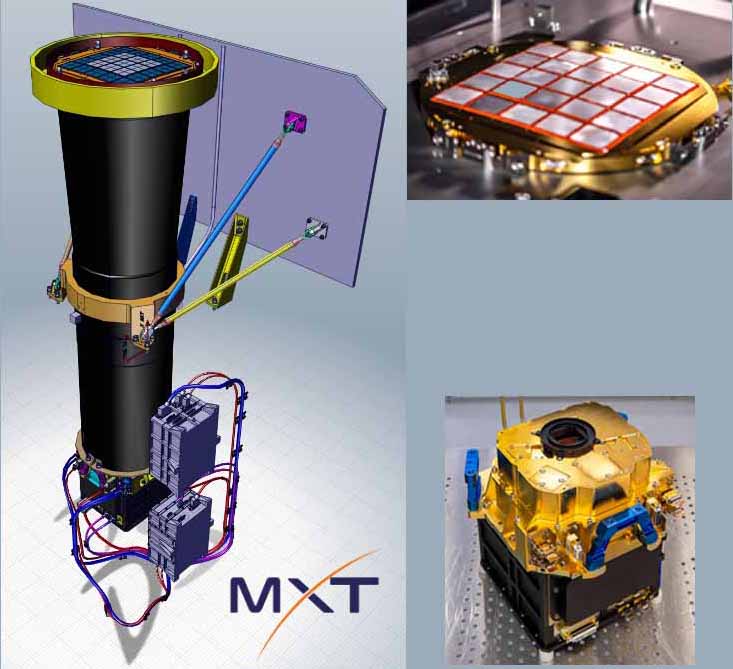 Schematic of MXT telescope: The multi-faceted optics at the entrance of the telescope has a diameter of 24 cm and a weight of 2 kg, The structure with a focal length of 1.15 m is made of carbon fiber with the camera home. The complete set (optics, tube, radiator, camera and on-board computer) weighs 35 kg. Credit: CEA / CNES

The camera project started in 2013 and was carried out in collaboration with the French Space Agency (CNES). The instrument is based on the use of a pnCCD detector and its proximity electronics (CAMEX), supplied by the Max Planck Institut für Extraterrestische Physik (MPE). Composed of different subsystems, the camera was completely built and assembled in the clean rooms of the Astrophysics Department (DAp) of CEA-Irfu, in a controlled environment to avoid any contamination.

The detector, consisting of a monolithic block divided into 256x256 pixels, was integrated on a ceramic plate, surrounded by a shield to reduce the impact of cosmic radiation on the detector. It has been fitted with a system of three thermoelectric coolers which makes it possible to maintain the temperature of the detector plane between -75 ° and -60 ° C. The detection assembly is inserted in a housing, which contains a filter wheel, used for calibration and protection purposes. All these camera subsystems were designed, integrated into the CEA and manufactured by the CEA or its subcontractors.

The technical team of the camera in the clean room. Right: the fully assembled MXT camera. It incorporates a 256x256 element pnCCD detector, its electronic control system as well as three thermoelectric coolers to maintain the temperature between -75 ° and -60 ° C) and a filter wheel. Copyright DAP/Irfu-CEA

To carry out in-depth testing, three different models of the camera have been built over the years: a structural and thermal model (STM), a performance model (PM) to validate the complete detection chain and a shock (SM) to test its resistance, before producing the final model called "Proto flight model (PFM)".

The development of these models involved a team of more than 20 people. The latest PFM model was produced despite the pandemic COVID-19 crisis, thanks to the strong involvement of the technicians, engineers and scientists of the project. The next steps in 2021 will be the assembly and testing of the entire MXT telescope and its final calibration which will be performed at the MPE X-ray Panter facility in Munich (Allemagne). The MXT team of the CEA will support the CNES during all these tests. At the end of this test campaign in November 2021, the MXT telescope will be shipped to China for final integration on the SVOM satellite, which is scheduled for launch before the end of 2022.

• Institute of Research into the Fundamental Laws of the Universe • The Astrophysics Division (DAp) • The Electronics, Detectors and Computing Division • The Systems Engineering Division