Rogue planets are elusive cosmic objects that have masses comparable to the largest planets in our Solar System but do not orbit a star, instead roaming freely on their own. Not many were known until now, but a team of astronomers, using data from facilities across the world, have just discovered at least 70 new rogue planets in our galaxy just a few hundred light-years away in the Scorpion sky region. This is the largest group of rogue planets ever discovered, an important step towards understanding the origins and features of these mysterious galactic nomads. 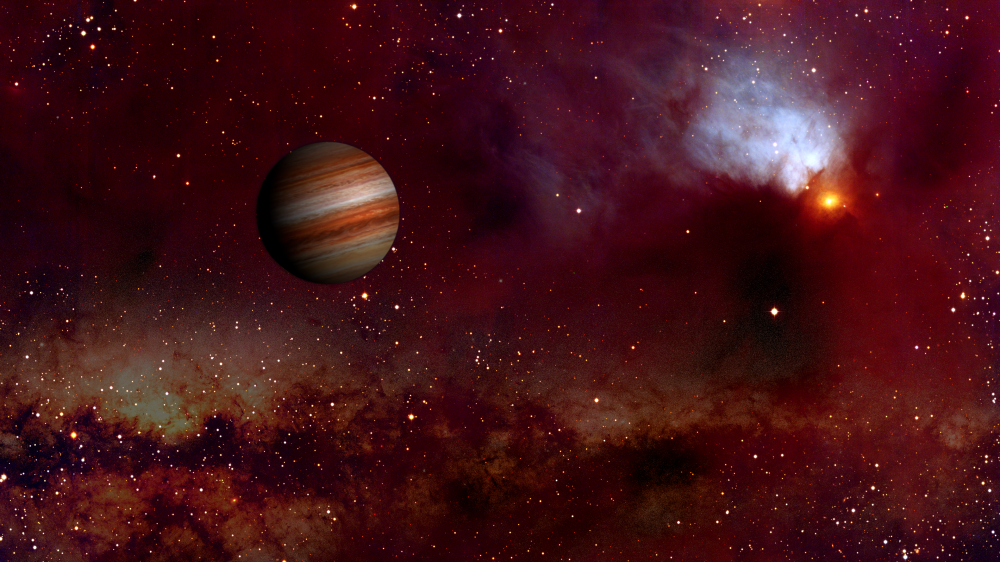 This artist’s impression shows an example of a rogue planet detected in the Rho Ophiuchi region where observations have recently helped uncover at least 70 of these objects. Rogue planets have masses comparable to those of the large planets in our Solar System but do not orbit a star, instead roaming freely on their own. Credit: COSMIC-DANCe Team/CFHT/Coelum/Gaia/DPAC.

“We did not know how many to expect and are excited to have found so many,” says Núria Miret-Roig, an astronomer at the Laboratoire d’Astrophysique de Bordeaux, France and the University of Vienna, Austria, and the first author of the new study published today in Nature Astronomy.

Rogue planets, lurking far away from any star illuminating them, would normally be impossible to image. However, Miret-Roig and the team took advantage of the fact that, in the few million years after their formation, these planets are still hot enough to glow, making them directly detectable by sensitive cameras on large telescopes. They found at least 70 new rogue planets with masses comparable to Jupiter’s in a star-forming region close to our Sun, 80 light-years across, in the Upper Scorpius and Ophiuchus constellations.

To spot so many rogue planets, the team used data spanning about 20 years from a number of telescopes on the ground and in space. “We measured the tiny motions, the colours and luminosities of tens of millions of sources in a large area of the sky,” explains Miret-Roig. “These measurements allowed us to securely identify the faintest objects in this region, the rogue planets.”

“We used tens of thousands of wide-field images from numerous facilities, corresponding to hundreds of hours of observations, and literally tens of terabytes of data.” explains Hervé Bouy, an astronomer at the Laboratoire d’Astrophysique de Bordeaux, France, and project leader of the new research.

The team exploited many observations from the Canada-France-Hawaii Telescope (CFHT) equipped with MegaCam, a high sensitivity panoramic camera designed and built by CEA-Saclay. “Its wide field of view, its sensitivity in the near-infrared, and its fine angular resolution were keys to our success”, explains Jean-Charles Cuillandre, astronomer from Université Paris-Saclay at CEA’s Département d’Astrophysique and member of the team. “MegaCam mounted on the CFHT atop Maunakea in Hawaii remains remarkably unique, adding to its track record the discovery of planets, something we never imagined when designing this instrument for the exploration of the distant universe!”

The team also used data from the European Space Agency’s Gaia satellite, marking a huge success for the collaboration of ground- and space-based telescopes in the exploration and understanding of our Universe.

The study suggests there could be many more of these elusive, starless planets that we have yet to discover. “There could be several billions of these free-floating giant planets roaming freely in the Milky Way without a host star,” Bouy explains.

By studying the newly found rogue planets, astronomers may find clues to how these mysterious objects form. Some scientists believe rogue planets can form from the collapse of a gas cloud that is too small to lead to the formation of a star, or that they could have been kicked out from their parent system. But which mechanism is more likely remains unknown.

Further advances in technology will be key to unlocking the mystery of these nomadic planets. The successor of the Hubble Space Telescope, the James Webb Space Telescope (JWST), which will be launched in a few days from Kourou, and will open revolutionary infrared observing capabilities of these dim planets which present the key advantage, in comparison to conventional exoplanets, of not being swamped in the brightness of a star. “These planets are excellent targets for Miri, an infrared instrument on the JWST we contributed to designing and building.“ enthuses Pierre-Olivier Lagage, director of DAp-AIM. “We are in a position to characterize their atmosphere in an unexplored wavelength domain, and possibly discover ever colder planets.” 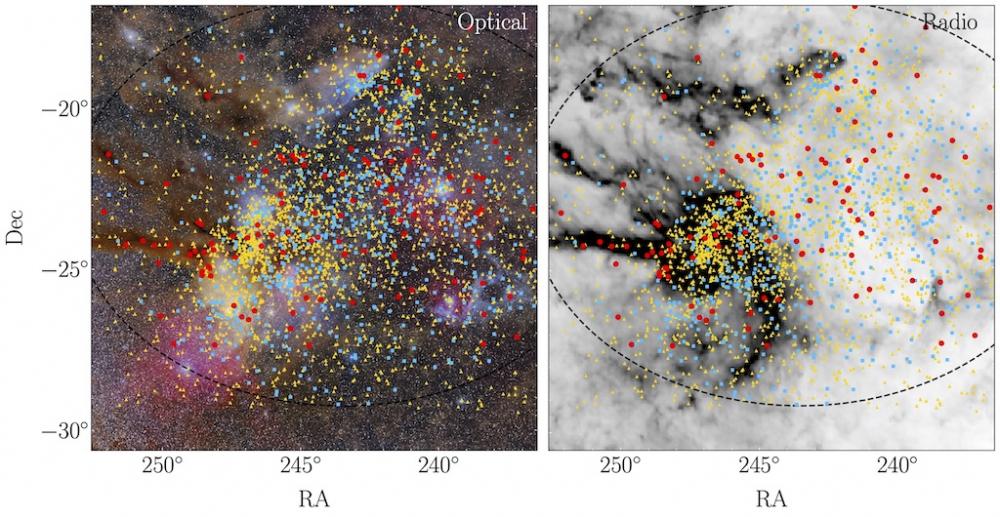 Sky distribution of stars, brown dwarfs and free-floating planets discovered in this study and classified assuming an age of 5 million years. Stars are shown as yellow triangles, brown dwarfs as blue squares and free-floating planets as red dots. The dashed ellipses indicate the area analysed with the DANCe catalogue. The distributions are overlaid on background images taken in optical (left) and radio (right, at 857 GHz) wavelengths.

This research was presented in the paper “A rich population of free-floating planets in the Upper Scorpius young stellar association” published in Nature Astronomy. It has received funding from the European Research Council (ERC) under the European Union’s Horizon 2020 research and innovation programme (grant agreement No 682903, P.I. H. Bouy), and from the French State in the framework of the ”Investments for the Future” Program, IdEx Bordeaux, reference ANR-10-IDEX-03-02.