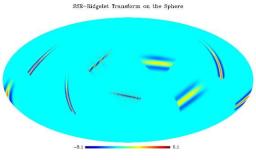 Backprojections of ridgelet coefficients at different positions,
orientations and scales on the sphere.

INTRODUCTION
In a number of areas of scientific activity, data is gathered which naturally maps to the sphere. For instance, remote sensing of the Earth's surface and atmosphere, generates spherical data maps which are crucial for global and local geophysical studies such as understanding climate change, geodynamics or monitoring human-environment interactions. More examples can be found in medical imaging or computer graphics. In astronomy and astrophysics, recent and upcoming ground based and satellite borne experiments such as WMAP or Planck-Surveyor for the observation of the Cosmic Microwave Background radiation field over the whole celestial sphere, have and will produce full-sky maps in a wide range of wavelengths.

Processing spherical data maps requires specific tools or somehow adapting traditional methods used on flat images to the spherical topology, such as multiscale transforms for image processing. Among these, Wavelets and related representations are by now successfully used in all areas of signal and image processing. Wavelets owe part of their success to their ability for sparse approximation of point singularities. However they are not as good at detecting highly anisotropic features such as curvilinear singularities in images. This is where other multiscale systems such as Ridgelets and Curvelets, which exhibit high directional sensitivity and are highly anisotropic, come into play.

Inspired by the successes of euclidean wavelets, ridgelets and curvelets, the present MRS package provides implementations of new multiscale decompositions for spherical images namely the isotropic undecimated wavelet transform, the ridgelet transform and the curvelet transform each of which is invertible. It also includes implementations of ICA (independent component analysis) techniques for the analysis of multi-channel data mapped to the sphere, namely fastICA, JADE and SMICA and their extensions into the wavelet domain.

USERS'S GUIDE
This user's guide gives a detailed description of the various tools implemented in the MRS package. The IDL routines available in the package are fully documented. Significant applications and numerical experiments are reported which illustrate the good performance of our toolbox.

DOWNLOAD
In order to use the MRS software package, it is required to have IDL (version 6.0 or later) installed on your computer as well as Healpix . Guidelines for installation are provided in the User's Guide which can be downloaded from the link above.

To be kept informed of future releases please subscribe to our mailing list by sending an email to
RELATED PUBLICATIONS
J.-L Starck, Y. Moudden, P. Abrial and M. Nguyen, "Wavelets, Ridgelets and Curvelets on the Sphere", Astronomy and Astrophysics, vol. 446, 3, 1191-1204, 2006 .