CaLIPSO : First success on an ultra-purification of an organometallic liquid 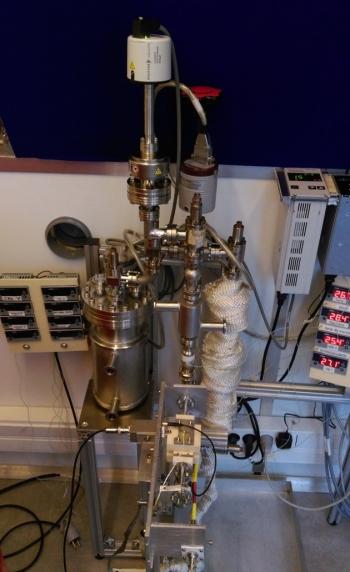 In the field of medical imaging, a IRFU team has launched a challenge: their goal is to image the brain activity with a precision of 1 mm3. Its name: CaLIPSO. The idea consists in an innovative detector technology: both light and ionisation signals produced by particle interactions are detected. For this, a series of technological obstacles must be overcome. One of these crucial steps has just succeeded. It consists in implementing the entire chain of ultra-purification of the detection liquid.

Neuro-imaging, or how to see the brain without looking at it

Brain imaging helps to understand better brain at work and neurological diseases. It allows researchers to associate the clinical symptoms of a disease with a specific part of the brain. It proves to be a valuable tool for diagnosing or evaluating treatment efficiency, but also for research studying the healthy brain.

Magnetic Resonance Imaging (MRI), the favorite technique of neuro-imaging in clinical routine, allows one to study the anatomy of the brain with a remarkable spatial resolution of the order of one mm3.

Another technique, Positron Emission Tomography (PET), does not allow one to image the brain itself, but visualize the brain's consumption of biochemical compounds, thus visualize brain activity. Today, PET-scan image brain activity with a modest spatial resolution (not as accurate as MRI). But because of it sensitivity to a large number of biochemical, it can image many biochemical processes, and thus turns out to be complementary to MRI.

A PET exam consists in injecting a β+ radioactive tracer into the patient's bloodstream, which are accumulated in the organ witch use it. The tracer releases a positron (an anti-electron) which, by meeting its sister-particle the electron, annihilates and emits two photons in opposite direction, both with the energy of 511 keV. The decay of the radioactive tracer into the patient's body emits a large number photon pairs (millions per second) and the detection of these photons makes it possible to reconstruct the map of the tracer concentration within the body. 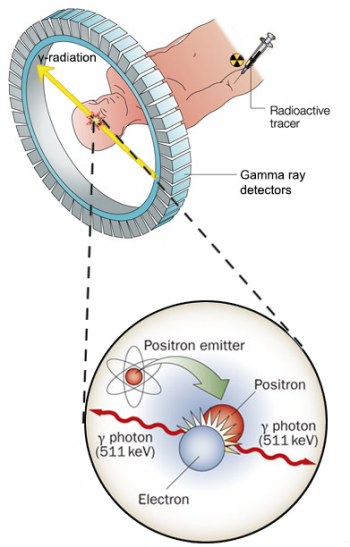 Schematic diagram of PET imaging. The 511-keV photons from the annihilation of a positron with an electron are detected in coincidence in order to reconstruct the map of the concentration of the radio-tracer in the organs.

CaLIPSO detection principle. The liquid Tri Methyl Bismuth allows to design a detector with the double detection: optical signal via the Cherenkov effect and ionization signal via the charge drift in the electric field.

It is in this context,  a team of DPhP physicists and DEDIP engineers and technicians have been working for several years on this “cutting-edge” detector technology. The objective is to quantify the activity of brain cells by means of a PET scanner with a spatial resolution of one mm3, achievable up to now only by MRI, and combine it with excellent detection efficiency. Indeed, since PET is an irradiating technique, the more efficient the detector, the lower the dose of tracer injected.

For this, an innovative detector with promising performance was suggested: CaLIPSO. It is an ionization chamber containing a very specific detection medium, the Tri Methyl Bismuth liquid (TMBi). The interaction of 511 keV photons in this liquid releases a single primary photo-electron which generates a near-instantaneous flash of a few tens of ultraviolet photons by Cherenkov effect, and ionizes the liquid, releasing thousands of electron-ion pairs. The light produced by the Cherenkov effect is detected by a fast photomultiplier, while the released charges drift along a strong electric field and are collected by a densely pixelized ionization detector.

Simultaneous detection of optical signals and ionization is the key to the CaLIPSO project. It leads to very promising performances: an energy resolution of 10% allows to reject efficiently photons with an energy smaller than 511 keV, a temporal resolution of 100 pico-seconds (10-10 s) that helps to identify photons in coincidence, and a 3D positioning of the interaction in the detector with a spatial resolution of 1 mm³.

The detection of γ photons with excellent 35% efficiency has been demonstrated previously. In the case of the detection of ionization electrons, a crucial step must first be taken: ultra-purification. Indeed, if electronegative impurities exist in the liquid, the electrons released by the 511-keV photon can be trapped by these impurities during their drift. Once caught, they will form negative ions too heavy and too slow to contribute to the induced electronic signal, and the collected charge will be reduced. The TMBi therefore needs to be extremely pure, that is to say free of any electronegative contaminants. Unfortunately, this liquid is chemically very reactive and poorly documented in the literature. It is therefore with a cousin of the TMBi, the Tetra Methyl Silane (TMSi), much better known to detector physicists, that the CaLIPSO team develops its know-how on purification technologies.

In 2017, a purification bench was designed and assembled in accordance with a rigorous and meticulous protocol of ultra-vacuum cleanliness. It is operating in a clean room dedicated entirely for CaLIPSO's needs. The purification process uses molecular sieves. These porous materials absorb preferentially the polar molecules inside their pores. Thanks to this purification bench and to the mastery of ultra-vacuum and ultra-clean techniques, a first phase of purification of the TMSi has been implemented. A gas chromatographic analysis followed with mass spectrometry was carried out by colleagues-chemist from the Nuclear Energy Department (CEA / DEN) before and after purification. The results of this analysis revealed the presence of a contaminant called Tetra Hydro Furane before purification. This is a solvent residue of TMSi synthesis. Analysis of the purified liquid revealed the absence of Tetra Hydro Furane (THF) after purification, thus confirming the adsorption efficiency of the molecular sieves and the mastery of the ultra-purification techniques by the CaLIPSO team. 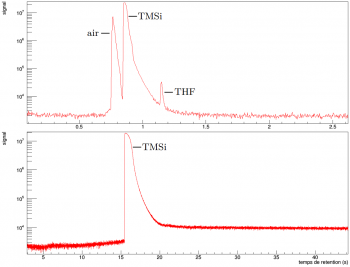 Analysis spectra (form Gas Chromatography, then Mass Spectrometry) of Tetra Methyl Silane before (at the top) and after (bottom) purification, via two different chromatography columns. After purification, the peak of Tetra Hydro Furane (THF, the contaminant ) is no longer detectable. The peak of air corresponds to contamination during sampling before analysis.

The TMSi was thus purified and recognized as chemically pure. At present, the CaLIPSO team is working at measuring the "lifetime" of the electrons in the TMSi, directly proportional to the concentration of impurities in the liquid, thanks to a charge detection cell. The next step will be to adapt the protocol for TMBi to measure its ionization parameters, never studied up to now. The development of the CaLIPSO detector is therefore making major advances, gradually overcoming each technological obstacle, thanks to a teamwork integrating various skills and a common goal.