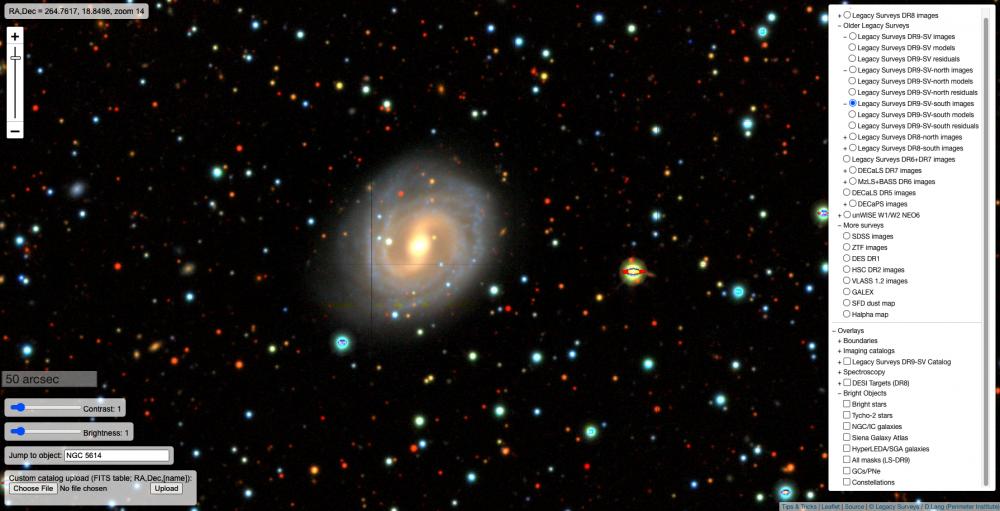 The 2D map does not contain information about the distances between galaxies. We will have to wait for the DESI project which will produce this information by combining to the first two coordinates the third dimension, measured from the "redshift" (or shift to redder colors) of galaxies and quasars. Indeed, the redder colors of objects are caused by the expansion of the Universe and give us an indication of their distance from Earth. The 2D map thus prepares the ground for DESI observations.

"It's the biggest map, in almost every respect", said David Schlegel, one of DESI's scientific leaders who led the imaging project. The map covers half of the sky and digitally spans more than 10,000 billion pixels. Accessible to the public on LegacySurvey, the map includes 2 billion objects, more than half of which are galaxies and quasars like the ones that will be imaged by DESI. Quasars are among the brightest objects in the Universe, with supermassive black holes at their center that emit powerful jets of matter.

An instrument to measure the properties of Dark Energy

The main objective of compiling the 2D map data is to identify these galaxy and quasar targets for DESI, which will measure their light to determine their redshift and distance. This will eventually provide new details on the mysterious dark energy that is at the origin of the acceleration of the expansion of the Universe.

Nathalie Palanque-Delabrouille, co-spokesperson of DESI and cosmologist at the French Alternative Energies and Atomic Energy Commission (CEA), mentions that the rate of expansion of the Universe has changed over time and that many questions remain unanswered about the causes of these changes.

"Our Universe has had a surprising history", she explains. "For the first half of its life, its expansion was mainly dictated by the dark matter it contains". Dark matter is unknown matter, which accounts for 85% of all matter in the Universe and which has so far been observed only indirectly through its gravitational effects on normal matter. "However, over the last 7 billion years, the expansion of our Universe has gradually accelerated under the influence of a mysterious dark energy", she added, "and the purpose of DESI is to clarify this description precisely by revealing what dark energy is".

Spectrum of a redshift quasar z=4.75 (red curve) measured by DESI during the "Survey Validation" phase. The black curve shows the model proposed by the analysis program to describe this spectrum and the green curve represents the statistical uncertainty on the measurement of the spectrum

Selecting targets for DESI, the largest spectroscopic survey ever performed

IRFU plays an important role in the effort to select the targets to be observed by DESI from the imaging data. Christophe Yèche, cosmologist at CEA and co-leader of the group dedicated to this effort, is studying how to combine imaging information to identify with the highest possible accuracy the different categories of galaxies and quasars that DESI will observe. "This work is delicate because the galaxies and quasars to be selected are very weak light sources", he notes. "Since mid-December 2020, the DESI project has been devoting its first months of observation to validating this selection, which will be the key to the success of the observation program over the next five years. It is a crucial but exciting moment! The first spectra of quasars and galaxies have just been presented at the AAS conference in January 2021 and they are very encouraging".

This research is supported by the Director, Office of Science, Office of High Energy Physics of the U.S. Department of Energy under Contract No. DE–AC02–05CH1123, and by the National Energy Research Scientific Computing Center, a DOE Office of Science User Facility under the same contract; additional support for DESI is provided by the U.S. National Science Foundation, Division of Astronomical Sciences under Contract No. AST-0950945 to the NSF’s National Optical-Infrared Astronomy Research Laboratory; the Science and Technologies Facilities Council of the United Kingdom; the Gordon and Betty Moore Foundation; the Heising-Simons Foundation; the French Alternative Energies and Atomic Energy Commission (CEA); the National Council of Science and Technology of Mexico; the Ministry of Economy of Spain, and by the DESI Member Institutions. The authors are honored to be permitted to conduct astronomical research on Iolkam Du’ag (Kitt Peak), a mountain with particular significance to the Tohono O’odham Nation.