Developing a source of positrons

As a technological extension of the fundamental antihydrogen R&D carried out by Dapnia's particle physics department (SPP), the Sophi project aims to build a source of high-intensity positrons. Positrons are produced when electrons interact with a tungsten target; they are then collected and guided by a magnetic system. The system's novelty comes from the low energy of the incident electrons, which produces a positron beam with strong dispersion in terms of energy and impulse. The difficulty lies in capturing these positrons and in separating them from the electrons, which are still 1000 times more numerous.

The ultimate goal of the antihydrogen experiment is to verify the sign and the intensity of gravitational acceleration for antimatter. In the extreme cases of models that allow for the possibility of negative acceleration, an atom of antimatter subjected to the Earth's gravity alone would rise rather than fall.

The construction of the source, based on a concept patented by physicists Patrice Perez and André Rosowsky, was funded by the French National Research Agency in 2005, and completed in 2006 with funding from the Essonne General Council by the acquisition of a miniature electron linac, named , with an energy level of 6 MeV.

Electron flux after the tungsten target. 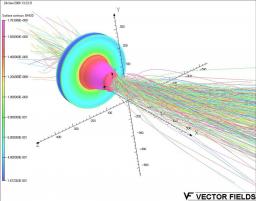 Positron flux after the target.

In 2006, the design of the capture and magnetic separation system was optimised by integrating the linac's parameters. Implementation and safety studies have been conducted to prepare for installation in Building 126. In October 2007, Sophi and will be installed in the hall previously occupied by the Saturne accelerator. These facilities will be used to demonstrate the feasibility of an intense source of positrons capable of filling the traps for the antihydrogen experiments at Cern.

In parallel, studies have been conducted in collaboration with the Cern-based teams of Professor André Rubbia to identify materials that can generate a high number of positroniums. Positrons are used in materials science as probes to characterise the size of point defects in crystal structures. The new source may ultimately be a replacement solution for sodium-22 sources, which currently supply positrons for materials science applications. 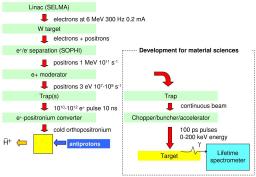