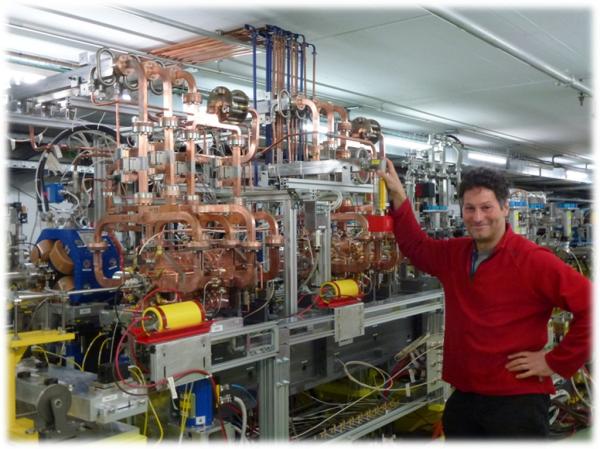 The Compact Linear Collider (CLIC) is a proposed linear electron-positron collider for use in very high energy physics research, and a potential successor to the LHC. The CLIC has a target collision energy between 0.38 and 3 TeV, and a luminosity of 1 to 2.1034 cm-2s-1 over a distance of 11 to 50 km. The design is based on a new two-beam concept at high frequency (12 GHz) and with a very steep acceleration gradient of 100 MV/m. This new concept has been studied experimentally using the CLIC Test Facility (CTF3) at CERN.

From 2013-2015, the CTF3 CALIFES electron injector, which simulates the main beam of the CLIC, provided the beam to study two-beam acceleration parameters and, at the same time, characterize a wide range of diagnostics for the future collider. Two 12 GHz accelerating structures designed and built by SACM and SIS teams, in close partnership with CERN and two companies, Mecachrome and Thales, were installed and tested on a first Two-Beam Test Stand (TBTS) from 2012 to 2013. These two structures are equipped with non-interceptive beam position detectors called wakefield monitors. The tests showed that these detectors can determine the position, and therefore align the cavities, to within less than 10 microns, which is essential for ensuring that the future Compact Linear Collider is able to contain the beam emittance and, at the same time, achieve the required high luminosity. Drawing on these results, an active adjustment and alignment system was added to the new prototype Two-Beam Module (TBM) installed in 2014 to replace the TBTS. Ongoing tests show an alignment capacity close to the 5 microns required by CLIC design. 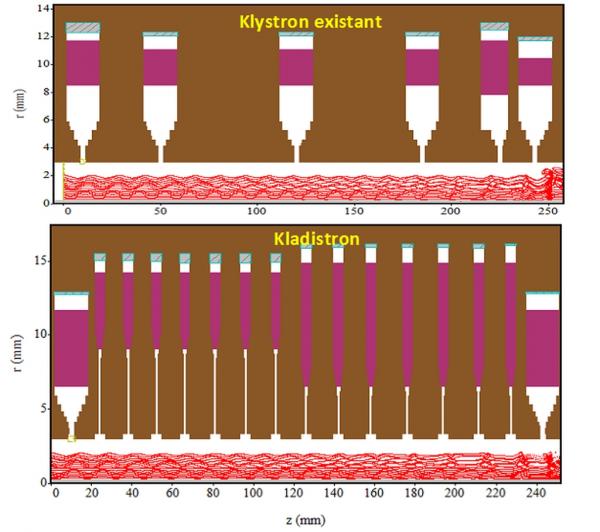 Schematic diagram of the kladistron 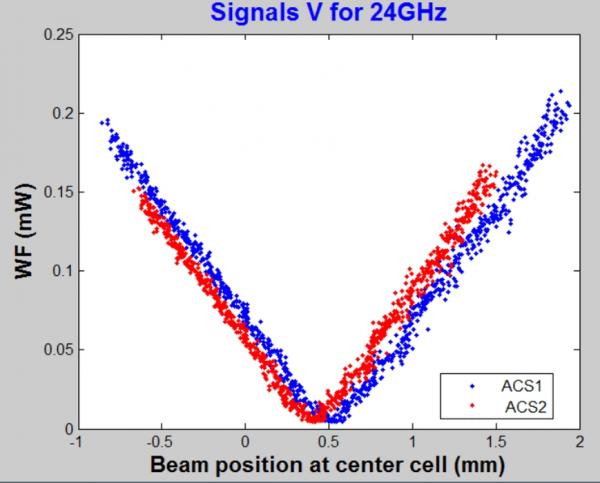 The second major challenge for the accelerating cavities is to provide an accelerating gradient of around 100 MV/m, while containing breakdowns. It was demonstrated that to do this, it was important to carry out high-power RF conditioning on each cavity, using RF stations including 12 GHz klystrons. As the 3 TeV version of the CLIC will comprise approximately 150,000 cavities, this conditioning will be a lengthy process that will consume a great deal of energy, and involve considerable expenditure in terms of investment in high-voltage modulators. An R&D program was therefore set up in 2013 with the aim of improving klystron efficiency in the X band. Within this context, SACM proposed a new concept for a 12 GHz klystron, called a kladistron. This consists in increasing the number of cavities within the same interaction length of the klystron, in order to improve the longitudinal grouping of bunches, and thus achieve more effective beam extraction at the output cavity. Simulations based on particle transport codes suggest that a gain in efficiency of some 10 points could be achieved. A 5 GHz prototype is currently under construction to validate this concept. This work was carried out in partnership with Thales since October 2014.