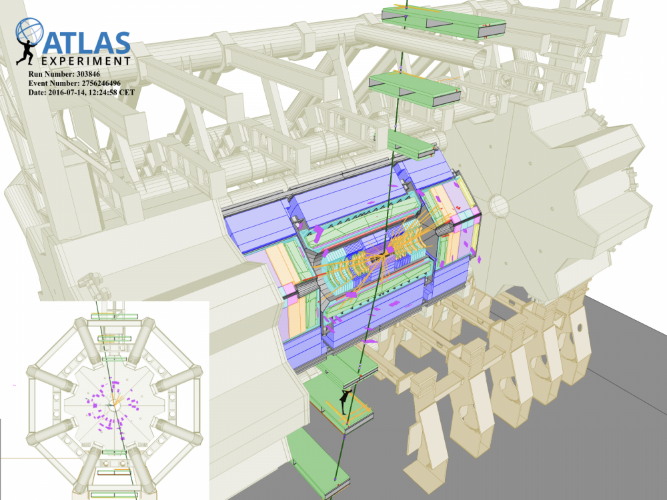 The muon spectrometer of the ATLAS experiment has been an important contribution of IRFU since the design, and IRFU is still in charge of the alignment today. The spectrometer plays a key role in the reconstruction of high-energy muons, the detection of which is crucial for the search of phenomena beyond the Standard Model. The spectrometer consists of about 1200 muon chambers that form a gigantic edifice 44 m long and 24 m in diameter. Despite these imposing proportions, the relative positions of the chambers must be known with an accuracy of the order of 50 μm in order to achieve the optimum performance of the spectrometer. To this end, a network of optical lines is used to continuously monitor the positions of the chambers relative to each other, as well as their deformations. An elaborate procedure for reconstructing the 56,000 parameters determining the alignment (for the central part) has been developed by a team at IRFU in order to obtain the precision required for the reconstruction of high-energy muons. This method, adopted by the ATLAS collaboration, is presented for the first time in an ATLAS note.

Principle of muon reconstruction in ATLAS

The reconstruction and identification of muons in ATLAS are carried out with the muon spectrometer, the last of its sub-detectors in the order of passage of the particles from the interaction point. The spectrometer is of imposing dimensions (44 m long and 24 m in diameter) and consists of a system of superconducting coils producing an inhomogeneous toroidal field of 0.5 tesla on average, in which muon chambers are located, generally organised in three detection layers (see figure below). The muon trajectories are thus detected at three points, and an effective sagitta can be reconstructed as the deviation of the middle measurement point from a line connecting the two extreme measurement points. Knowing the magnetic field of the toroidal system, it is possible to relate this effective deflection to the momentum of the muon. The objective for the spectrometer is to measure it with an accuracy of about 10% for high-energy muons (with a transverse momentum of 1 TeV). This goal supports the exploratory ambitions of the LHC experiments: the muon spectrometer is used, for example, to search for new high-mass particles decaying into muons. 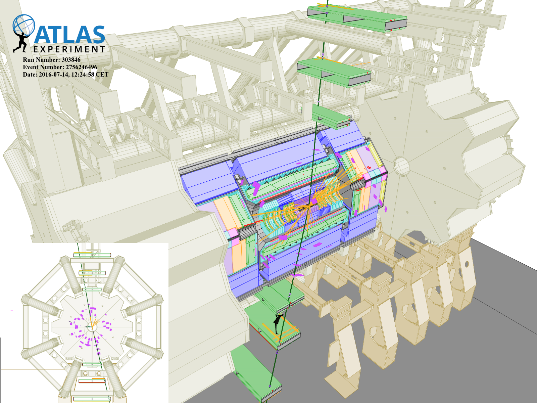 An event with two high-energy muons (green lines) recorded by the Atlas detector. The affected muon chambers are in green.

IRFU and the spectrometer, a long history of muons

IRFU's contributions to the muon spectrometer and its magnetic field are major: from its design in the 1990s to the New Small Wheel project today, which aims to replace part of the muon chambers in preparation for the high-luminosity phase of the LHC. The optical system of the central part of the muon spectrometer is another major historical contribution of the IRFU. Ensuring its proper functioning and determining its alignment are also important responsibilities of the Institute today.

The alignment of the spectrometer

Given the magnetic field strength and the dimensions of the spectrometer, the effective deflection of a 1 TeV muon is about 500 µm. This deflection must be measured with an accuracy of 10%, about 50 µm, i.e. the combination of the spatial resolution of the detectors and the accuracy of their alignment must be of the order of 50 µm. In addition to the fact that the muon chambers must therefore measure with very good resolution, they must also be very well aligned with each other. However, on the scale of accuracy required, the muon chambers move and deform significantly and frequently over time: mainly due to thermal variations, but also during personal access to intervene on the detector, or due to variations in magnetic forces when the field is switched on or off. The spectrometer is therefore equipped with a network of optical lines, which continuously measure the positions of the muon chambers in relation to each other and their deformations. An optical line consists of three elements precisely mounted on the muon chambers: a backlit target element, a lens, and a CMOS sensor. The image of the target, focused by the lens on the sensor, provides information on the deviation from a straight line of the centre points of these three elements, and thus gives information on the alignment of the muon chambers on which these elements are mounted. In total, the central part of the spectrometer is equipped with 5800 optical lines, and the end-caps with 6600 optical lines. Each muon chamber is also equipped with temperature sensors, in order to reconstruct their thermal expansion. A view of the alignment system for the central part of the detector is shown in the adjacent figure. 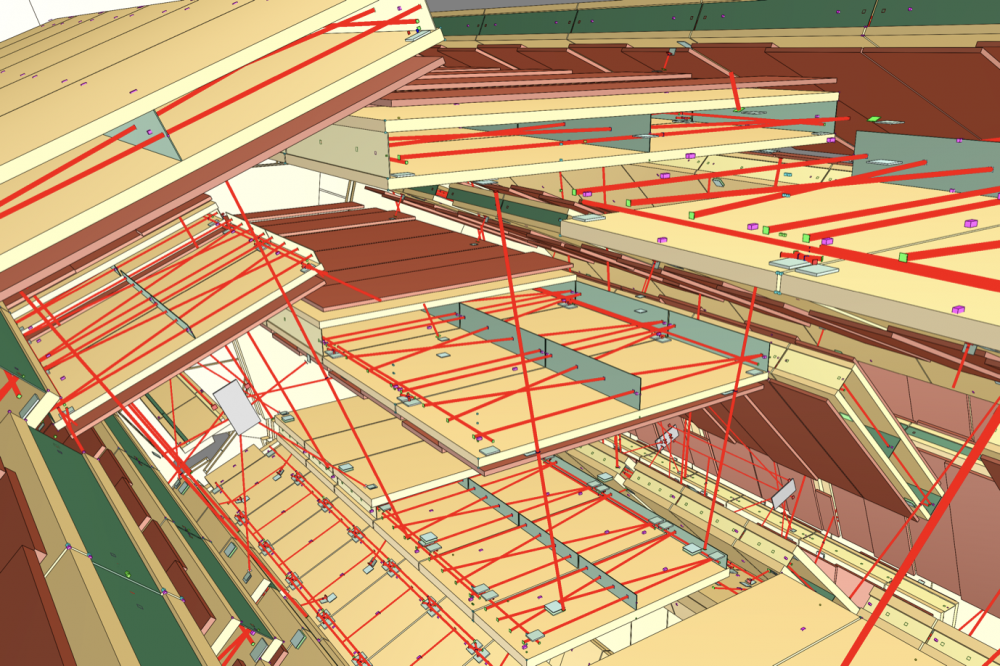 A schematic view of the optical alignment system of the muon spectrometer. The muon chambers are shown in gold, and the optical lines in red. Each optical line consists of a triplet (sensor, lens, target). The target is usually a backlit coded mask, the image of which is focused by the lens on the sensor. The reconstruction of this image provides a measurement of the deviation from a straight line of the centre points of the three elements, and thus provides information on the relative positions and deformations of the muon chambers to which these elements are attached.

During the construction of the muon chambers and the optical system in the 2000s, an extensive campaign of calibrations and measurements was carried out, in order to know with great precision the internal geometry of the chambers, and the positions of the centres of the optical elements with respect to the chambers. This information is used in a model of the optical system, which predicts the response of the optical sensors according to the positions and deformations of the muon chambers. By comparing this modelwith the values actually measured by the optical sensors, through a minimisation algorithm, it is possible to reconstruct the positions and deformations of the muon chambers. This procedure is called the absolute alignment.
Given the complexity and diversity of the optical system, this absolute alignment procedure alone does not achieve the desired performance for the entire detector. It must be combined with information obtained from muons recorded in data without magnetic field, in order to reconstruct a reference geometry: an accurate alignment of the spectrometer at a given time (that of the data acquisition period without a magnetic field). The optical system is then used to measure the evolution of the alignment over time using the reference geometry as a starting point. This procedure is the relative alignment.

Various calibration data sets, with cosmic muons or LHC collisions, dedicated to the alignment of the spectrometer are regularly recorded by ATLAS, with the toroidal field system switched off. Indeed, in this configuration without magnetic field, the muon trajectories are deviated only by their interaction with the matter of the muons spectrometer (multiple scattering): the actual effective muon deflection is on average zero, but its dispersion is significant and depends on the energy of the muons and the amount of matter crossed. Thus, if a non-zero average deflection is measured, this indicates a misalignment. A reference geometry is reconstructed using this information, combined with the absolute alignment procedure of the optical system.
During the final reconstruction of the ATLAS data set at Run2, a new alignment was produced for the spectrometer, for the period 2017-2018: new chambers had been installed at different locations, and several muon chambers had been disassembled for repair. These operations had rendered the reference geometry inaccurate, and a new alignment reconstruction was required.
The key point for the reconstruction of a new alignment is the determination of the reference geometry. This determination uses muons, from both cosmic and collisional sources, from two periods of data collection without a toroidal field. Data recorded with a toroidal field are also needed, to correctly reconstruct the alignment with respect to the other ATLAS sub-detectors. An original reconstruction procedure is therefore set up, which combines all the diversity of information from the muon tracks and the optical sensors, and where, for the central part of the detector, three alignments are determined simultaneously: the alignment made with cosmic data, the one made with data without a magnetic field, and the one made with data with a magnetic field. These three alignments are combined to obtain the reference geometry. A total of 56,000 parameters are reconstructed for the central part of the detector! 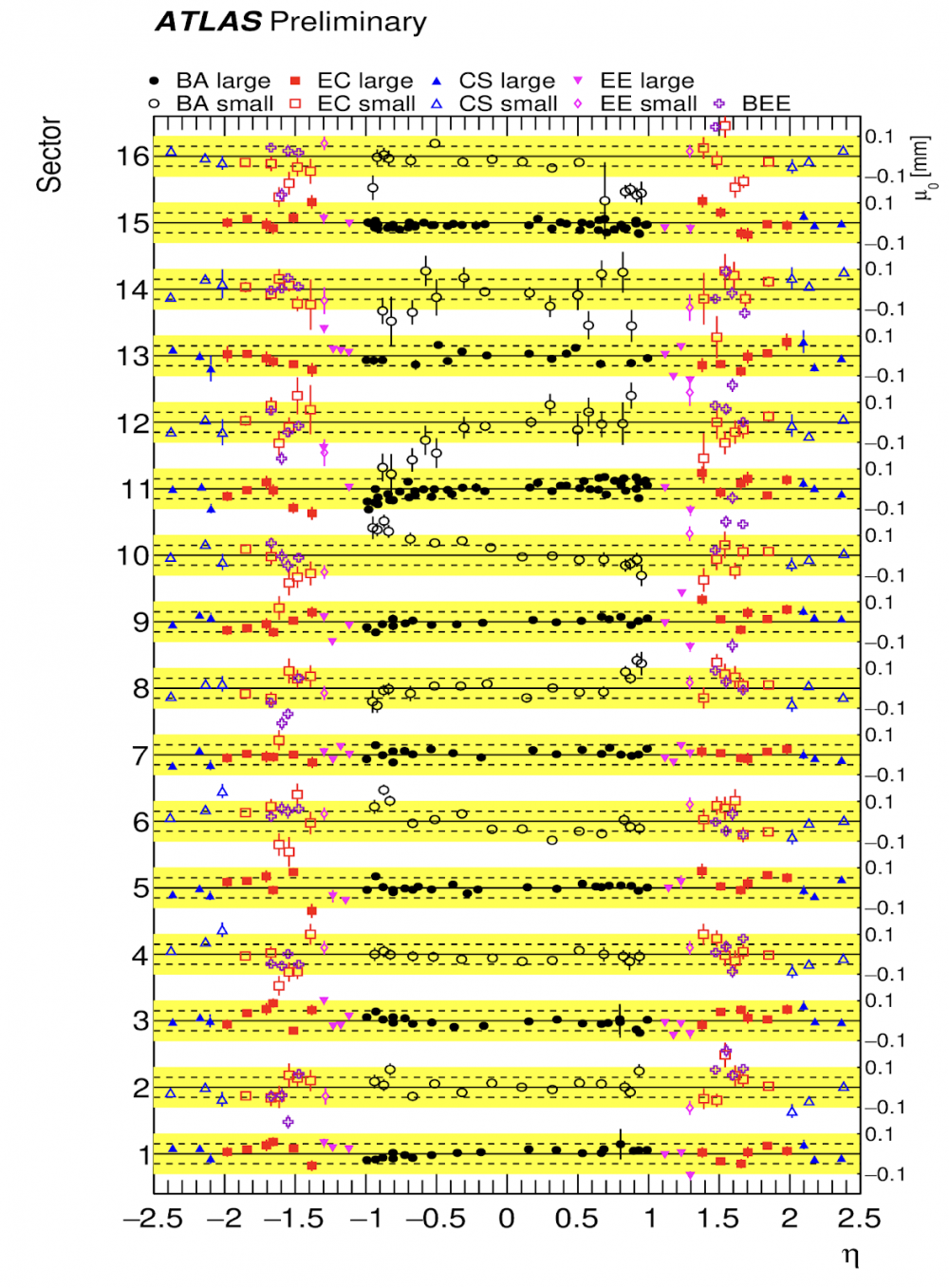 This figure shows, for each tower of the muon spectrometer, the effective muon arrow recorded during an ATLAS collision run with the toroidal field system switched off. The spectrometer is subdivided into 16 sectors, according to the azimuth angle. Each yellow band is ±100µm wide, and the average arrow of all the towers in a sector is shown (a zero arrow is expected). The different colours represent different regions of the detector (in black the central part).

The figure on the left shows the effective muon deflection recorded by ATLAS during collisions without field in the toroidal system, for all towers of the muon spectrometer, i.e. all triplets of chambers through which muons pass: the different sectors of the spectrometer are exposed on the vertical axis, each sector has a yellow band of size ± 100 µm drawn, and for each tower the deflection bias measurement is added on the yellow band. Although in some sectors significant deviations can be observed, a large majority of the towers show sagitta deviations close to zero. This performance measured without a magnetic field is also confirmed by another study conducted on data taken with a magnetic field.
By comparing the effective deflections for each tower of the spectrometer with the statistical error of the measurement, average performances are estimated for different regions of the muon spectrometer. For example, a performance of 30 µm is achieved in the large central sectors of the detector, the region of the spectrometer where the alignment performance target is the most stringent. More generally, the observed alignment performance is compatible with the reconstruction objectives for high-energy muons.

The muon spectrometer, with its imposing dimensions and varied architecture, is thus aligned with an overall accuracy of the order of 50 µm on the reconstruction of the sagitta. The final performance of the alignment is well within the expected range, and is used to reconstruct muons for the ATLAS experiment, with very high quality.