To study the limits of the Standard Model and to answer the great questions of modern physics (origin and hierarchy of the masses, dark matter and dark energy of the universe, matter-antimatter asymmetry, ...) the conditions that prevailed at the beginning of the universe, i.e. very high temperature conditions, have to be reproduced. For this, the LHC accelerates protons to energies never reached to date and makes them collide frontally in the heart of large detectors like CMS.

This detector detects the product of these collisions and, analyzing them, can identify each type of event. The statistical comparison of each of these categories of events with the theoretical predictions makes it possible to confirm or invalidate various models.

The LHC produces proton-proton interactions every 25 ns, with more than a dozen collisions per interaction. This produces tens of millions of events to process per second. Moreover, since the events searched for are very rare, it is necessary to eliminate in real time the interactions without physical interest. This is achieved by a high-performance online selection system. To analyze the products of proton-proton collisions, it is necessary to have a detector capable of recognizing each type of particle produced.

In CMS, an intense solenoidal magnetic field, produced by a superconducting coil, deflects the charged particles. A silicon trajectometer placed at the center of the detector makes it possible to measure the curvature of these trajectories and thus to reconstruct the momentum of the particles. Around the trajectometer is installed an electromagnetic calorimeter consisting of nearly 80,000 crystals of lead tungstate. It can measure the energy of photons, electrons and positrons. A hadronic calorimeter, placed around the preceding one, makes it possible to measure the energy of hadrons (protons, pions, kaons, ...). Outside the coil, the magnetic yoke that channels the magnetic field return lines is instrumented to detect the muons. The on-line selection of events is carried out using information from the calorimetric systems and the muon detection system. This system reduces the number of interesting events to 100,000 per second. The trajectometer information is used in a later phase during the detailed reconstruction of the events which allows to keep only a few hundred interesting events per second which are analyzed in detail in all the laboratories of the collaboration. 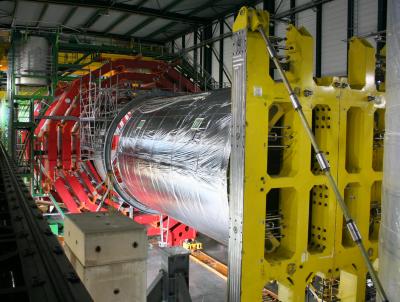