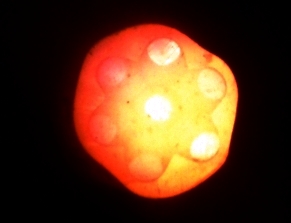 Coming from fundamental research on solar neutrino, the Solar Quantum Concentrator( CSQ) is a future low-cost and high efficiency solution for photovoltaic solar energy. CSQ is made of a carpet bundle of Rotating Photon Optical Fibers (FORP)  trapping, converting and guiding solar light towards a photovoltaic cell.

A small ribbon of photovoltaic cell is put on the perimeter of the fiber carpet.

The rotating Photon concept is achieved through the triple coincidence of three quantum effects : the coincidence of the fluorescence band of wavelength of a dye with the forbidden bandgap of a photonic crystal, and also a proper mode of the optical fiber.

While solar light penetrates the fiber through its transparent coating, the FORP behaves as a spectral concentrator, converting the solar flux of energy in the range [400-900] nm toward 950 nm. While the output of a classical fluorescent polymer optical fiber under solar illumination is about 6 % of the incoming incident light, theoretical calculations with a FORP predicts an output of about 80 % ~ 100 % of the incoming flux of photons of solar light with a fiber of about 1 meter length.

Thus, the Solar Quantum Concentrator is made of 99 % part of polymer and 1 % of Silicon. An energetic efficiency greater than 20 % is expected. With an estimated cost of about 10 €/m², the Quantum Solar Concentrator is to be a highly promising disruptive technology in the field of solar energy.

To summarize, while a photovoltaic power plant of 1 Gigawatt peak with today's technology of solar modules costs about 1 billion €, tomorrow a solar plant of the same peak energy will cost only few tens of millions €.

With this low cost and high efficiency solution, this technological transfert from fundamental research toward applied research and industry happened to be disruptive either technologically or economically in the field of solar energy.

Static and roofable, the Solar Quantum Concentrator doesn't need any solar tracker as for classical Photovoltaic Concentration (CPV) technics. Moreover this new device can work even with clouds in front of the sun, so it does not require a blue sky to be operational as with solar concentration with lenses whose technology is only viable at tropical latitudes. Also, the excessive heating of solar cell produced with the focalization of the lenses of CPV of all solar light and particularly of unused infrared radiation is avoided with the Quantum Solar Concentrator technology. Indeed, only usable photons for the photovoltaic effect on Silicon are brought to the cell by each each Rotating Photon Optical Fiber ; photons with greater wavelengthes are kept untreated by the fiber.

This new technology is protected by a patent.

The forbidden bandgap of a photonic crystal ?

A photonic crystal with 1,2 or 3 dimension periodical microstructure is made of two transparent materials with different optical indexes. The typical size of this microstructure is hundred nanometer or the quarter of the wavelength of photons. The main property of a photonic crystal is the existence of a forbidden bandgap that blocks the propagation of photons in various directions and for various ranges of wavelengthes. The basic principle of photonic crystal is the analogue for photons of the theory of conductivity of electrons in solid crystals. The same Bloch-Floquet theorem applies for a wavefunction of particles constrained with a Born-Von-Karman periodic limit whose main consequence is the appearance of a conducting band and a forbidden bandgap.

As it loses energy in vibration-rotation modes, a dye molecule red-shifts the absorbed photon into a  reemitted photon of smaller energy through the fluorescence process.

While light is confined inside the core of a step-index fiber thanks to total reflexion at the border of the dioptre between the core and the coating of the fiber ; another phenomenon occures inside a photonic crystal fiber : the forbidden bandgap behaves like a perfect mirror with a very high coefficient of reflexion like a dielectric mirror. 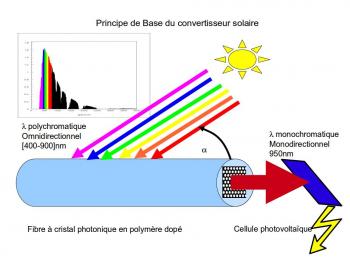 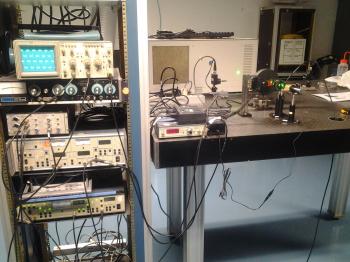 The proof of concept as the focusing goal of the QUYOS projet.

The goal of the proof of concept is the validation of the principle of photon rotation as expected with such a fluorescent photonic crystal optical fiber.

The measurement of the efficiency of this process is given by the ratio of the outgoing photons at each end of the fiber after conversion to the number of incoming photons perpendicularly to the fiber. The comparison of this value for a rotating photon optical fiber and for a classical fluorescent fiber gives the validation of the proof of concept.

In order to achieve this measurement, the collaborators of IRAMIS/LYDIL of the QUYOS team have built a dedicated photonic test bench.

On this test bench, the fiber is laterally exposed to a chopped laser beam while a filtered photodiode and a spectrometer are measuring the fluorescent light emerging at both ends of the fiber. The acquisition set-up is built around a lock-in amplifier for the synchronous detection of the signal.

These Rotating Photon Optical Fibers are either built at Lannion by Photonics Bretagne company on the PERFOS platform, or in CEA-Saclay on our drawing fiber tower.

With a size of the microstructure of hundreds nanometers, the photonic crystal is precisely obtained through an homothetic compression of a factor about 500 of a macroscopic plastic preform with an heterogeneous structure of a periodic polymer assembly, a fluorescent core and a coating. We build this preform in a chemical laboratory with the help of chemists specialized in polymers and dye chemistery.