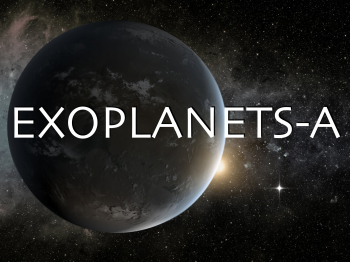 Since the discovery of the first extrasolar planet in 1995, about 4000 exoplanets have been detected. While discoveries of exoplanets are becoming more and more frequent, another chapter of their study has started to open up and will develop strongly in the years to come: the characterization of their atmosphere. We can learn a lot from the extraction of atmospheric spectra from exoplanets: for example, the molecular composition of giant exoplanet atmospheres can trace the formation and evolution of the planet, while the atmosphere of rocky exoplanets can reveal gases that reveal the existence of biologic activity.

Figure 1:
•Transit: The blue layer schematizes the atmospheric layer of the planet; during a (primary) transit, the atoms and molecules present in the atmosphere will absorb the radiation of the star at given wavelengths.
•Eclipse: By subtracting the signal during the eclipse, when only the star can be seen from the observed signal just prior and after the eclipse, when both planet and star are seen, we can obtain the light emitted (or reflected) by the exoplanet only. Atoms, hazes, molecules features are present in the emitted or reflected light, giving information on the atmospheric chemical composition.

The most frequently used method to obtain information on the exoplanets' atmosphere is to observe the absorption by this atmosphere of the host star's light. Molecules in the atmosphere absorb the light of the star in wavelength bands that are typical of the molecule, most often located in the infrared range. Observations are therefore made with spectrometer that detect infrared light. Such observations are only possible when the exoplanet, its host star and the Earth are aligned (See Figure 1).  The atmosphere of an exoplanet in transit absorbs only a tiny fraction of the light from its host star, so that the effect is often embedded  in systematic noises from the instrument or  the telescope.

Information on the atmosphere of an exoplanet can also be obtained during an eclipse of the planet by its host star (See Figure 1). Indeed, by differentiating between the signal observed before the eclipse, which contains the emission of the star and the planet, and the signal observed during the eclipse, which contains only the star emission, we can obtain the signal from the planet by subtracting the two measurements. This signal is much weaker than that of the star and is also often embedded in the systematic noises of instruments and telescopes.

To overcome the challenges of studying the atmosphere of exoplanets, seven laboratories in Europe have decided to join forces and combine their expertise in this field through the European Horizon-2020 ExoplANETS-A project, under the coordination of CEA Saclay. The objectives of the project are: