An international team from the Sloan Digital Sky Survey (SDSS) has carried out the first large-scale spectroscopic analysis of quasars, and was able to create a full 3D map of the universe and its large structures as it was 6 billion years ago. For now, the standard model of Cosmology, based upon Einstein's general theory of relativity, is confirmed.

Astrophysicists have chosen the brightest possible light sources, quasars, to explore the far distant past of the universe, between six and ten billion years ago. They selected 147,000 quasars from a photometric measurement and performed spectrometric analyses for each of them at different wavelengths. To isolate these sources, they produced nearly 300 opaque plates, pierced at the precise coordinates of the quasars that were considered. And, one at a time, interposed these plates in the focal plan of their spectrometer, using the Sloan Foundation Telescope at the Apache Point Observatory in New Mexico (USA). The spatial distribution of these quasars was rebuilt based on two years of observations.

With this new map, the scientists have access to new data related to the first 400,000 years of the universe, when pressure waves traveled through its extremely dense matter. These waves "froze" at the precise time where atoms were formed, leaving a footprint in the form of a spatial regularity in the density of matter (characterized by a distance called Baryonic Acoustic Oscillations or "BAO peak"). The scientists provided evidence of this distance through a statistical analysis of distances between neighboring quasars (see chart). Its value (500 million light-years) serves as a reference to measure the expansion of the universe. The simplest cosmological model provides a perfect explanation of these observations.

The physicists are already preparing SDSS's successor DESI (Dark Energy Spectroscopic Instrument), which will analyze the light emitted by 35 million galaxies and quasars, up to
11 billion light-years from Earth. Its construction at Kitt Peak Observatory in Arizona has already begun, and the first observations are scheduled for 2019. 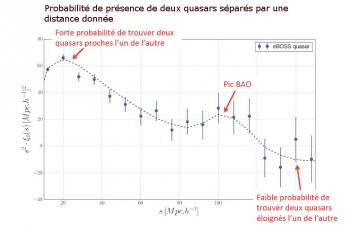