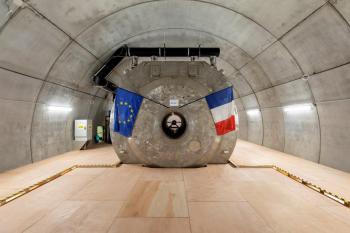 The front face of the magnet. In the left photo, the object on the left, known as “the satellite”, is the component through which helium and current pass to reach the magnet © Francis Rhodes / CEA

The Iseult project magnet being installed at Neurospin (CEA Paris-Saclay) reached a nominal magnetic field of 11.7 teslas (T) on July 18, 2019. This is a world record for a whole-body magnetic resonance imager (MRI) magnet, the culmination of years of R&D, at the forefront of innovation in the field of superconducting magnets. Over the coming months, the equipment required for neuroimaging will be installed around the magnet and in its central tube to create a human MRI scanner capable of examining the brain more accurately than ever before, in the interest of fundamental research, cognitive sciences and diagnosing neurodegenerative diseases.

In the process of being installed at the CEA Paris-Saclay site since July 2017, the colossal magnet weighing 132 tons is now fully operational. To do this, the teams had to meet the many challenges involved in setting up such equipment:

To reach its nominal magnetic field, the magnet is supplied with a current of 1,500 amperes and the conductor coils are cooled constantly by 7,000 liters of superfluid helium. With a magnetic field of 11.7 T, this is a world record in the field of MRI and an all-time record with this type of superconducting material. Manufacturing this 132-tonne prototype – measuring 5 m in length with an outer diameter of 5 m and an inner diameter of 90 cm – will have taken six years of development in Alstom (now General Electric, GE) factories in Belfort and nearly two years of installation and testing before it is commissioned.

Over the following months, numerous items of equipment will be added to the magnet to transform it into an MRI machine capable of producing images of volunteers’ brains: gradient coils, radiofrequency coils, patient table, outer casing, etc. 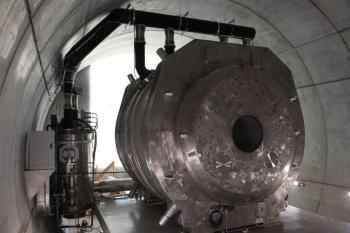