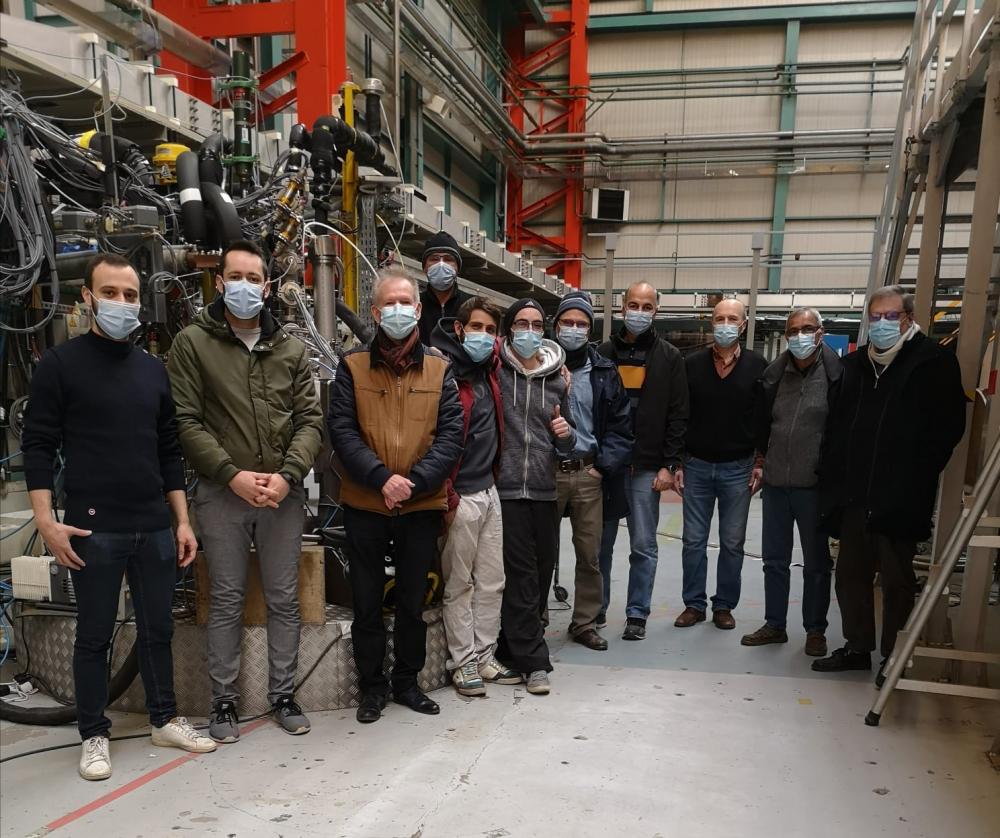 The IRFU team that contributed to the construction and testing of the quadrupole at Saclay.

To meet the needs of the HL-LHC project, IRFU has been working since 2014, as part of a collaboration with CERN, on the development of a double aperture NbTi magnet (allowing the passage of the 2 beams of the collider). This 90mm aperture quadrupole magnet has an operating gradient of 120 T/m at 1.9 K and a magnetic length of 3.67 m. To develop this magnet, the CEA was in charge of designing, manufacturing and testing a short model single aperture of 1.2 m magnetic length, called MQYYM. 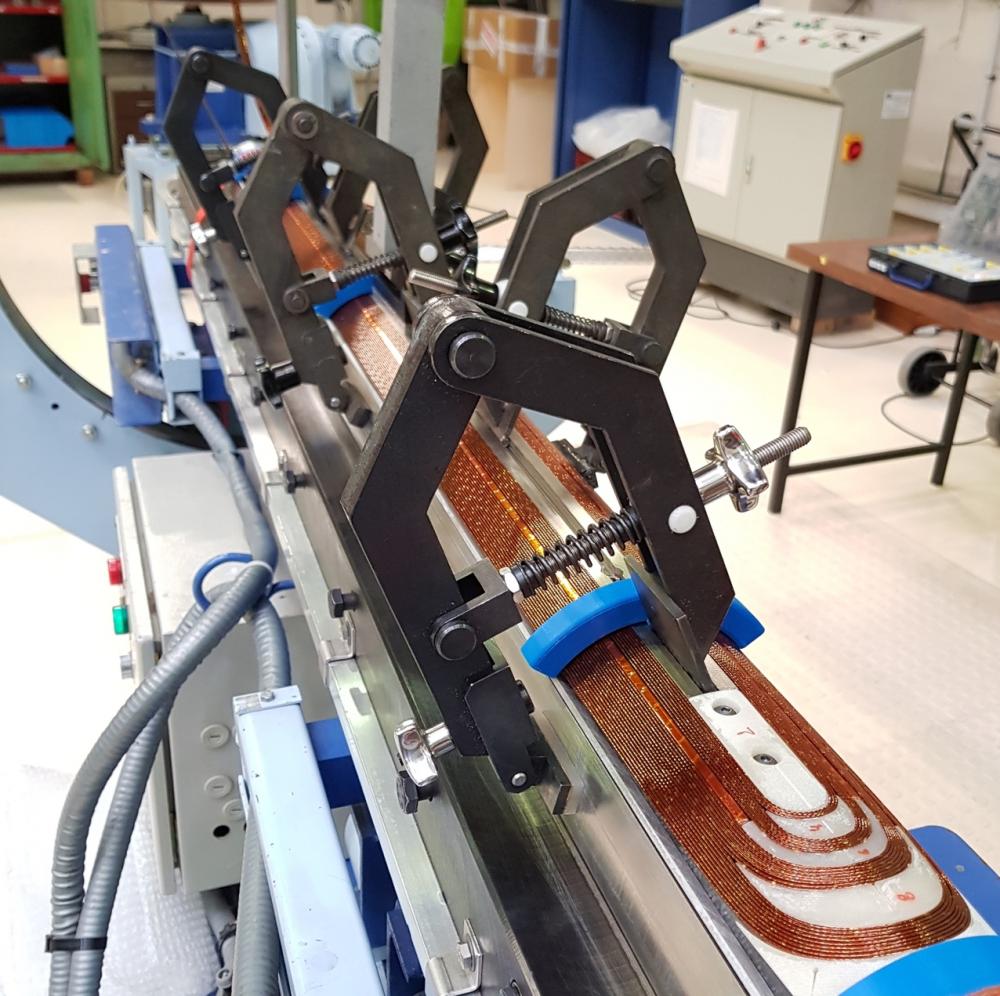 Immobilisation of the conductors during the winding of the first of the 4 poles. Image taken on the LEAS winding machine in Saclay.

Assembly of the MQYYM magnet at CERN

For the manufacturing of this short model, the mechanical design, drawings and follow up of the magnets components fabrication by suppliers was carried out by IRFU. In January 2017 the winding of the coils started at the CEA. The IRFU teams travelled then to CERN in 2019 to assemble the coils in a mechanical structure made up of stainless-steel collars using a vertical press developed by CERN. Around the collared coils forming the aperture, a magnetic yoke is assembled to complete the magnet.

In January 2020 the short model returned to Saclay to be tested in the vertical cryostat of the IRFU test station. After several months of test preparation during which the magnet was suspended to the cryostat top plate, connected to the current leads and instrumented, the magnet was cooled-down to 4.2 K. Once the magnet reached correct temperature, the current was mounted in the coils to verify that the requested magnetic field could be reached. Finally, after a training of only two quenches at 4.2 K, the magnet reached the current of 4,550 A which produces the expected gradient of 120 T/m at 1.9K without quench. This test at 4.2 K revealed the very good performance of the magnet knowing that this result was only expected during the test at 1.9 K and that the accelerator magnets often quench many times before reaching the desired magnetic field.

During the test of the MQYYM magnet, the vertical station's analog Magnet Safety System (MSS) detects the quenches and protects the magnet by controlling its rapid discharge into a dump resistor. Since 2018, IRFU has developed a digital MSS, most of the processing of which is integrated into an FPGA (field-programmable gate array), after digitizing the signals from the magnet. A prototype operated throughout these tests, with a detection threshold more sensitive than the analog version. The results obtained are identical in the two systems. The digital MSS did not detect any false events during the entire operation. The measurement signals and the detections of the 2 quenches are identical to the analog MSS, with the same triggered times. This successful test validates the use of a digital MSS, with redundant analog MSS, within the framework of the future IRFU test station. 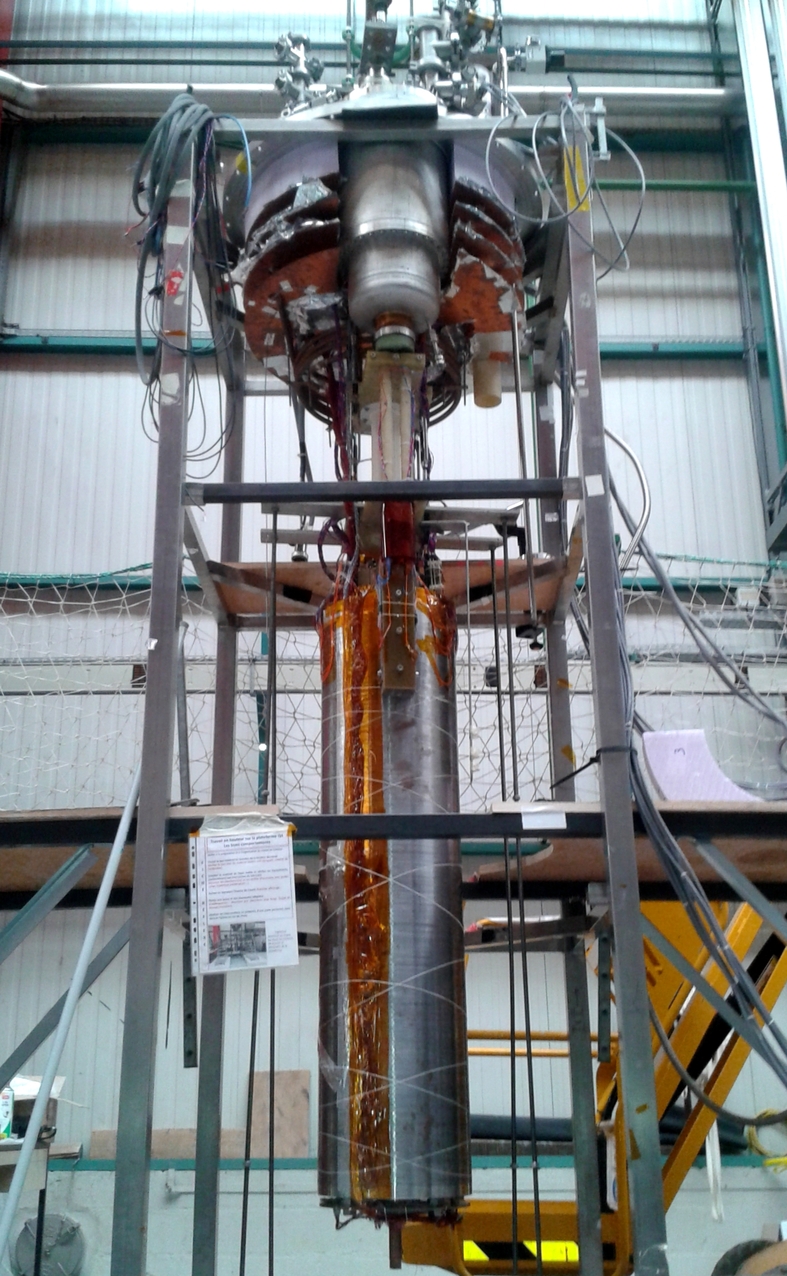 View of the short single aperture quadrupole in test configuration before insertion into the cryostat.

In the coming months, the MQYYM magnet will be removed from the current station and then reassembled on a brand new IRFU station called STAARQ (Station Test Aimant AccélérateuR Quadripole) designed to test the accelerator magnets at a temperature of 1.9 K and characterize their magnetic performance. These tests will achieve the nominal temperature of the magnet at 1.9 K to further increase the gradient. Then it will be the turn of the long magnets, which will arrive from the industry via the QuaCo project, to be tested.

• Accelerators, Cryogenics and Magnetism Division (DACM) • Institute of Research into the Fundamental Laws of the Universe • The Systems Engineering Division