The CdTe detector R&D activity is inherited from the development of the CdTe based imager on board the Integral/Isgri space camera. This R&D programme was classified as a priority R&D study by the Astrophysics department council in November 2002. The activity formally started in February 2003 where SEDI and SAp joined together for this project.
The activity aims at developing segmented electrode arrays based on CdTe or CdZnTe semiconductors ranging from 0.5 up to 6 mm thickness. Both CdTe and CZT are known as possible excellent X and gamma-ray spectrometers, when operated at room temperature or moderately cooled (-40°C up to +30°C).
Until now, performances of such detector types were essentially limited by:
• The crystallographic quality that limits the crystal size, production yield and properties uniformity;
• The poor charge carrier transport properties, subject to charge trapping and ballistic deficit.
Our scientific goal is to progress on all parameters simultaneously. The project is focused on joint progress on spectroscopic performance, spatial resolution and detection efficiency in the high energy range up to 1 MeV to respond to the general expectations of the high energy space science.
On the application side, the project si directly connected with planned high energy astrophysic space missions like the ECLAIRs gamma ray burst detector or the ambitious SIMBOL-X flight-in-formation mission.

Recent results of the R&D program led CEA to propose ambitious and credible technical contributions to these space projects, which started phase A in 2005 and 2006 respectively. 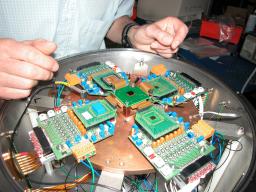 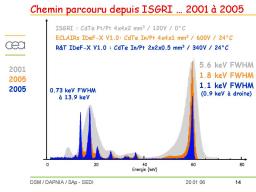