The LHC is a formidable particle accelerator of 27 kilometers in circumference located at CERN near Geneva. After three years of maintenance, the enormous complex has once again started to explore the infinitely small this summer in a third run. A run full of scientific promise, as the machine's performance has been improved. The accelerator has gained in energy and luminosity, but the four giant detectors at the heart of which the "projectiles" collide at almost the speed of light are not to be outdone. Here is an overview.
These four technological monsters, each composed of an assembly of complementary sub-detectors, are ATLAS and CMS, two general-purpose detectors that are responsible for the discovery of the Higgs boson, LHCb, which specializes in the exploration of the infinitesimal differences between matter and antimatter, and ALICE, which is dedicated to the study of quark and gluon plasma. After these three years of rejuvenation, LHCb and ALICE are as good as new, ready for run 3, but also for the next one, beyond 2029. The renovation programs for ATLAS and CMS have been more modest while waiting for their "grand refurbishment", scheduled from 2026 to 2028.

The modifications made to the two general-purpose detectors of the LHC are nevertheless notable. One example is the replacement of the two "small wheels" of ATLAS, two “disks” placed near the beam axis, which are part of its muon spectrometer. "Small" is saying a lot when it comes to two detectors 10 meters in diameter and weighing 100 tons each! As Philippe Schune, scientific leader of the New small wheel project at IRFU and a member of ATLAS, explains, "this change was essential to cope with the progressive increase in the flux of particles produced at the LHC from run 3 onwards, both to protect the small wheels and to increase ATLAS's ability to sort out interesting events from the experimental background."

For the design of the "new small wheels," the specialists implemented a most demanding specification. While the two wheels are located several meters from the interaction point, they must be able to reconstruct the muon track to within 50 micrometers and their momentum with a relative accuracy of 15 percent, even though the proton beams intersect in the detector every 25 nanoseconds!

To do this, the two detectors are made up of a patchwork of gas detectors based on two different principles, including the one known as Micromegas, invented in the early 1990s by Georges Charpak with people from IRFU. "The Micromegas part of these two wheels is made up of 128 detectors of 8 to 12 square meters each, for a total surface area of about 1,400 square meters," says the CEA physicist whose team built the 32 largest detectors, or more than a quarter of the useful surface area of the two wheels.

Because of its recognized expertise in micromechanical opto-mechanics, the CEA institute also performed the mechanical calibration of all the Micromegas detectors of the new small wheels. "Since these are multi-material structures that will be subjected to temperature gradients, their design, manufacture and assembly represented a major mechanical and metrological challenge to guarantee the positioning of each detector to within a few tens of micrometers over several square meters," Philippe Schune said. 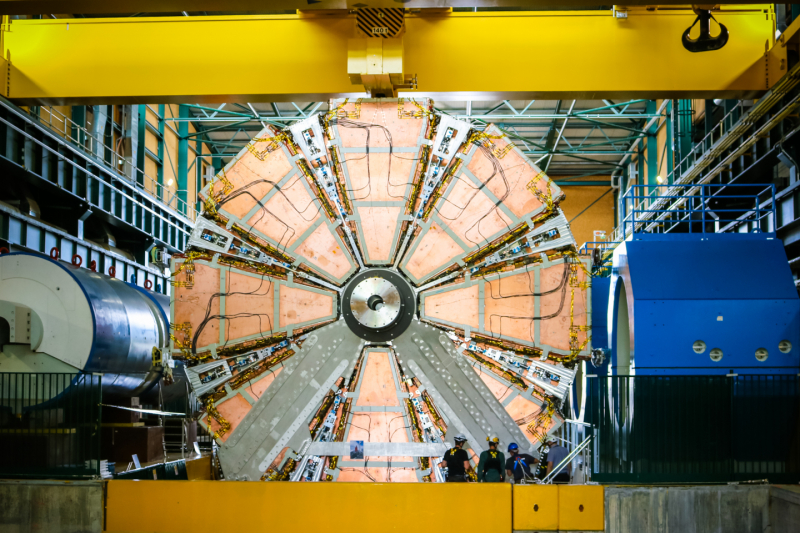 Descent of a New small wheel in the Atlas cavern in July 2021. © CERN

Precision is also what has guided the major transformations carried out on the ALICE detector. Its role: to study the properties of the quark-gluon plasma (QGP), an extreme state of matter, by collecting the clouds of particles that escape from it as it cools before disappearing after being generated in collisions within the detector.

From this point of view, while ATLAS and CMS are looking for rare events, ALICE is interested in the collective properties of events and seeks to measure the product of each collision. While in previous LHC runs, the ALICE experiment did not have the capacity to record data at the maximum rate allowed by the LHC, the upgrades of the past few years aim to increase the rate of data taking by a factor of 10 to understand the physics of the QGP in detail. "While we were triggering at a frequency of a few kHz during the previous runs, we will now be able to reach 50 kHz," says Stefano Panebianco, at IRFU and member of ALICE.

As a result, given the response time of the detector, from now on, on each "snapshot" that comes out of it, it is not the image of a single collision that specialists will contemplate, but between 5 and 10 superimposed on each other. A major challenge will then be to distinguish each signal left by the passage of a particle, while each collision generates several hundred, even several thousand tracks.

The largest pixel detector ever built

To achieve this, there is only one solution: to increase the spatial resolution at which ALICE works. This is the purpose of its new internal trajectograph, ITS2, developed and built in part by the IN2P3 laboratories, whose role is to capture the trajectory of charged particles from the plasma near the collision point. As Antonin Maire, at the Institut Pluridisciplinaire Hubert Curien and member of ALICE, points out, "it is a pixelated cylindrical detector, a bit like a camera, but with 7 layers deployed around the beam, including 13 billion pixels for a surface area of 10 square meters, which is nothing less than the largest detector ever built in this silicon technology.

While the previous trajectograph had a granularity of 50 by 450 micrometers, ITS2's granularity reaches 30 times 30 micrometers. In addition, its first layer is located 2.2 centimeters from the beam, compared to twice that previously. Finally, the thickness of each detection layer has been divided by 3 in order to disturb the measurement as little as possible. This allows us to document the origin of particle trajectories to within 5 micrometers, compared to 10 to 15 micrometers during previous runs. 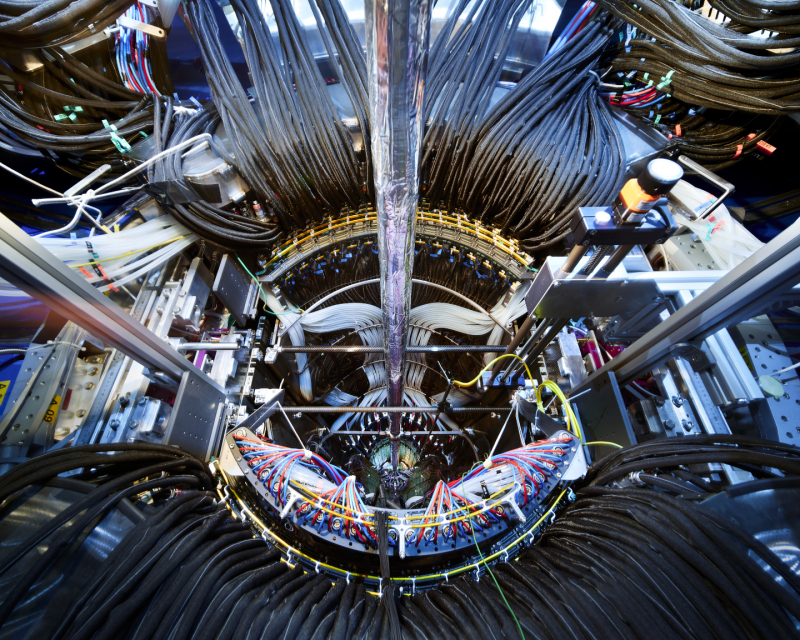 But that's not all. About 50 centimeters from the interaction point, in the forward direction of the detector, the specialists have also equipped ALICE with a new detector, the Muon Forward Tracker (MFT), to help them untangle the tracks of muons coming from the decay of heavy particles from the plasma. Indeed, until run 2, the muon spectrometer, placed behind an absorber stopping all other particles, suffered from a "blurred" vision by this last element. Placed in front of the absorber, MFT will thus play the role of "corrective lenses" for the spectrometer. 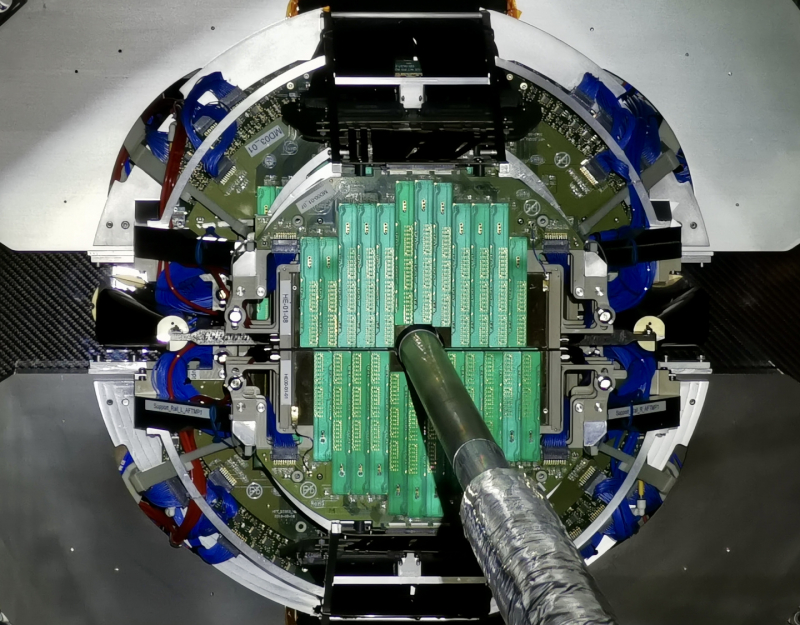 The MFT detector in its final position around the beam tube inside the ALICE experiment in 2020. © CERN

A camera with 1 billion pixels to track muons

Like ITS2, MFT is a pixel "camera". Consisting of 5 disks of increasing diameter covered with active chips on both sides, with its 1 billion pixels, it will allow a resolution of 5 micrometers on the trajectories of the particles. “We will then be able to distinguish hadrons containing a charm or bottom quark, either directly from the plasma and therefore providing information on its most intimate properties, or from secondary decays," says Sarah Portebœuf-Houssais, at the Clermont-Ferrand Physics Laboratory and member of ALICE, who adds: "It is thus a new field of muon physics that opens up for ALICE”.

With the decision to increase from 1 to 6 the number of collisions occurring within the detector at each crossing of proton bunches, LHCb faces a problem comparable to that of ALICE. As Renaud Le Gac, at the Marseille Center for Particle Physics and a member of LHCb, sums up, "on each picture taken by the detector, about 200 tracks from multiple decays will be superimposed, creating a combinatorial pattern that is too large to be able to reallocate its fruits to the different collisions."

Unless the spatial resolution of the instrument is increased, which is what the experts operating LHCb have been working on during the last shutdown. For example, several elements of the RICH 1 and RICH 2 detectors, which are used to identify certain charged particles, have been changed. This is also the case for the entire VELO detector, which detects the first segments of tracks as close as possible to the collision, for UT, which provides other points of trajectory measurements a little further downstream, and for SciFi, which does the same beyond the deflector magnet, this before-and-after magnet allowing us to specify the momentum of particles.

SciFi is emblematic of the new LHCb strategy which, in addition to increasing the resolution of the instrument, also includes the principle of a complete reading of the signals deposited on the detector at the rate of collisions, i.e. 40 megaHertz, compared to 1 megaHertz previously.
Five meters wide and six meters high, SciFi is composed of three stations of six layers of scintillating fibers 250 micrometers thick that form a total "web" of 11,000 kilometers. "In the previous version, the passage of a particle through the detector resulted in an electrical signal whose processing is incompatible with the new reading frequency, hence the use of optical fibers," explains Renaud Le Gac. 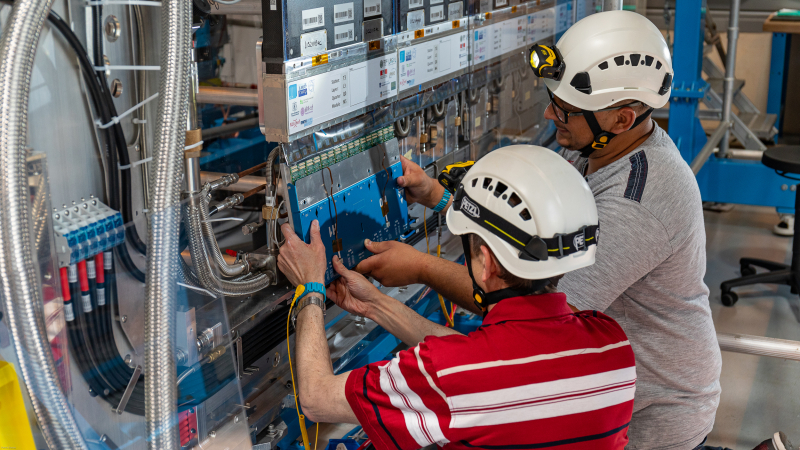 Installation of an electronic box on the bottom part of a module of the scintillating fiber detector (SciFi) of the LHCb experiment. The detector includes a total of 256 boxes. Patrick Dumas/CNRS / Photothèque IN2P3

From now on, each time a particle interacts with a fiber, a light signal will propagate to a reading cell where the information will be immediately digitized by a specialized integrated circuit, before being transmitted for real-time reconstruction of events at the staggering rate of 40 terabits per second! "This integrated circuit, but also a board for clustering the information when a particle hits several wires and the cooling system for the readout electronics, are the work of the Clermont-Ferrand Physics Laboratory. The Laboratoire de Physique Nucléaire et des Hautes Energies, in Paris, designed part of the readout boards that receive the data from the frontend electronics," adds the physicist, who comments: "11,000 kilometers of fiber is unprecedented, the detection cell is quite new, the temperature is a real challenge, and the information flow is not bad!” All these improvements, in addition to those made on all four LHC detectors, will increase the performance of the experiments during run 3, which promises to be the renewal of the giant accelerator.