Cross sections are a key nuclear physics observable, essential both for planning experiments (choice of beam and target to produce the nucleus of interest with a reasonable intensity) and interpreting the results. Among all the possible reaction processes, proton-induced single-nucleon (i.e. proton or neutron) removal is of particular interest. In the case of the proton removal, this is the reaction:

where Z is the number of protons and N is the number of neutrons that compose the X nucleus. This reaction consists in a sudden knock-out of a nucleon (a proton in this case) leaving the rest of the nucleons that compose the so-called “daughter” nucleus (X(Z-1,N)) intact. Usually, it is used to populate low-lying excited states of interest for spectroscopy. In this case we focus on inclusive cross sections, i.e. cross sections to all final states of the daughter nucleus.

Using the ensemble of data from two SEASTAR campaigns at the RIBF [see highlights FM2015 and FM2017] an international team led by CEA Saclay extracted 55 inclusive single-nucleon removal cross sections from very neutron-rich nuclei. The experiment was made possible thanks to the world-unique radioactive beams from the RIKEN RIBF facility and the MINOS device conceived and built at Irfu (Fig. 1).

The nuclei analyzed are shown as red points in Figure 2 and constitute a very significant increase of the available data.

Figure 1: The BigRIPS device used to select the nuclei of interest (left) and MINOS used to study them (right).

Figure 2: Chart of nuclides showing nuclei for which nucleon-removal cross sections have been measured before (in blue) and in this experiment (in red).

Having such a large dataset at hands, the results were analyzed looking for systematic trends. Since the studied nuclei are very neutron-rich, their production – using proton-removal reaction - competes with the emission of a neutron if the daughter nucleus is produced at high excitation energy. Thus, the X(Z-1,N-1) nucleus would result from the reaction.  A very peculiar one was observed when plotting the proton-removal cross sections as a function of the neutron separation energy Sn, i.e. the energy that one should provide to remove one neutron from the nucleus. Data for projectiles with even (odd) proton number (Z) are shown by empty (filled) circles in Figure 3(a). A splitting in two distinct linear trends for even- and odd-Z projectiles is observed.

What could be the origin of this splitting? Removing one proton from an odd-Z projectile lead to an even-Z daughter nucleus in which, in first approximation, all the protons are in pairs. For these even-Z daughter nuclei, the pairing interaction leads to a reduced level density, visible already in the lowest energy part of the spectrum as a gap between the ground state and the first excited state. The cross section from odd-Z projectile nuclei is therefore lower due to the reduced number of available final states in the even-Z daughters.

To test this interpretation, the results were compared to the Liège Intranuclear Cascade Model (INCL), a semi-microscopic model developed largely within Irfu and recently used in the literature to describe inclusive nucleon removal cross sections. While INCL reproduces well the global overall decreasing trends with -Sn seen in the proton-removal data, the odd-even splitting is not reproduced, as may be seen by the blue markers in Figure 3(a), and quantified in Figure 3(b). To mimic the effect of pairing on inclusive cross sections within the INCL approach, a phenomenological correction was made to the INCL excitation energy for odd-Z projectiles. This correction allowed to qualitatively reproduce the OES (from blue to red line in Figure 3 (b)).

A similar study for neutron removal is also presented in this same paper. No such strong effect appears in this region of very neutron-rich nuclei, but the behavior is compatible with the dependence on pairing effect described for the proton-removal reactions. 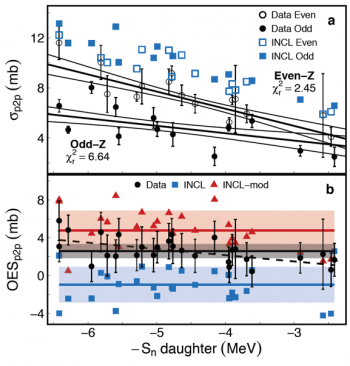 Figure 3: Inclusive cross section (a) and odd-even splitting (OES) (b) measured in this experiment as a function of the neutron separation energy Sn, compared to INCL calculations.

This work reveals the important role that pairing plays in describing the one-proton removal cross sections from neutron-rich nuclei, and highlights the sensitivity of this observable to low-lying level structure. The results suggest that inclusive one-nucleon removal cross sections can probe nuclear structure at the neutron dripline (limit of existence of neutron-rich nuclei, far from the valley of stability) for nuclei not reachable by spectroscopy.