CMS is the detector of one of the 2 multi-purpose experiments out of the 4 experiments located at the LHC at CERN near Geneva. CMS is installed at point 5 in Cessy.

During the last decades, research in particle physics has made tremendous progress and succeeded in validating the theoretical framework called “Standard Model”. Nevertheless, lot of questions remain opened: Why matter is in excess in our universe while it was produced the same amount of matter and antimatter at the Big Bang ? How elementary particles acquire their mass? Would we have to modify our understanding of matter and energy if we observe new processes or new particles? In particular, the field associated to the “Higgs boson” could have generated the mass of all other particles. Other new particles are expected in the framework of Standard Model extensions such as a particle to explain the Dark Matter component of the universe as suggested by measurements from astrophysics and cosmology, or particles from supersymmetry, extra-dimensions or mini black holes ?

For the CMS detector, the Saclay group is responsible for the design, manufacture and commissioning of the calibration system, by laser light injection, of the electromagnetic calorimeter (ECAL) with lead tungstate crystals and its permanent online monitoring. The group is also responsible for the development, commissioning and maintenance of the off-detector electronic system called the Selective Read-out Processor (SRP). For each event accepted by the first level of the experiment triggering system, the SRP makes it possible to alleviate in real time the quantity of calorimeter raw data before being sent to the acquisition system.

Concerning the upgrades of the CMS detector for the high-luminosity phase of the LHC i.e. the phase 2 upgrades for  HL-LHC, the CMS-Saclay group is involved in the design, development and manufacture of the front-end electronics of the barrel electromagnetic calorimeter. In addition, CMS endcap calorimeters will be replaced for this HL-LHC phase. In May 2015 CMS opted for a radiation hard high granularity and dense silicon / tungsten calorimeter called HGCAL. The CMS-Saclay group in Saclay is involved in this project by taking the responsibility for the design and development of the precise LHC clock distribution system, including the TDC part of the HGCAL front end electronics, in order to ensure the synchronization of the HGCAL electronic channels and the precise determination of particles time of the flight. The development of the clock distribution system may go beyond the HGCAL framework and become generalized to other CMS detectors. The CMS-Saclay group is also involved in the study of jets trigger primitives algorithms for HGCAL and their implementation in firmwares (FPGA).

Optical fibres system developed to uniformly distribute laser light to crystals during the follow-up of the crystal transparency of CMS-ECAL.

Even if crystals used in CMS-ECAL are radiation hard, they suffer for loss of light transmission under irradiation due to colour centres creation in the crystal structure.

We have developed a system to measure in real time the transparency of each crystal which subsequently, permit to correct the detector response and thus stabilize it at the level of few per mille in order to be able to perform a physics calibration during a period of about one month.

This measurement is done by injecting laser light in front of each crystal and by reading the associated photo detector response. The amount of laser light send to the crystal is measured with a reference PN diode.

In order to reach the desired performances, we have developed a light distribution system with optical fibres associated to multilevel randomisation splitters to avoid propagation of laser speckles.

A specific electronics has been developed to read the reference PN diodes: a low noise preamplifier in DMILL technology (FEM) and a digitisation module with an interface with the CMS DAQ (MEM).

The SRP consists of 12 6U-VME cards, grouped in triplets. Each triplet processes the data coming from one ECAL partition.

In the CMS experiment, a complete readout of the electromagnetic calorimeter represents a data block of 1.5 MB, which is bigger than the allowed size for the full CMS event.

In order to decrease the ECAL size by a factor of about 20 without introducing biases in physics analysis, we have developed the Selective readout Processor (SPR), which allow to readout only the relevant regions for each event.

The SRP receives the information from the trigger system through “trigger primitives” and send back to the data concentrator the basic unit numbers which will be fully read out. On the other regions, we perform a zero suppression.

The main difficulties in such a system are located at the level of the communications with the other ECAL parts. A protocol based on very high speed serial transfers with optical fibres has been implemented in this project. This offered the opportunity for the SEDI to extend its know-how in this strategic domain. This communication architecture has been later reuse in CMS by the Global Trigger team to develop a new system.

Study, construction and commissionning of the facility (dubbed "squirrel") to introduce and install the EM calorimeter supermodules inside the CMS Barrel. 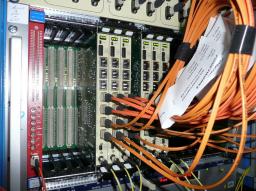 Triplet of VME cards of the selective readout processor developed for the CMS ECAL acquisition system.