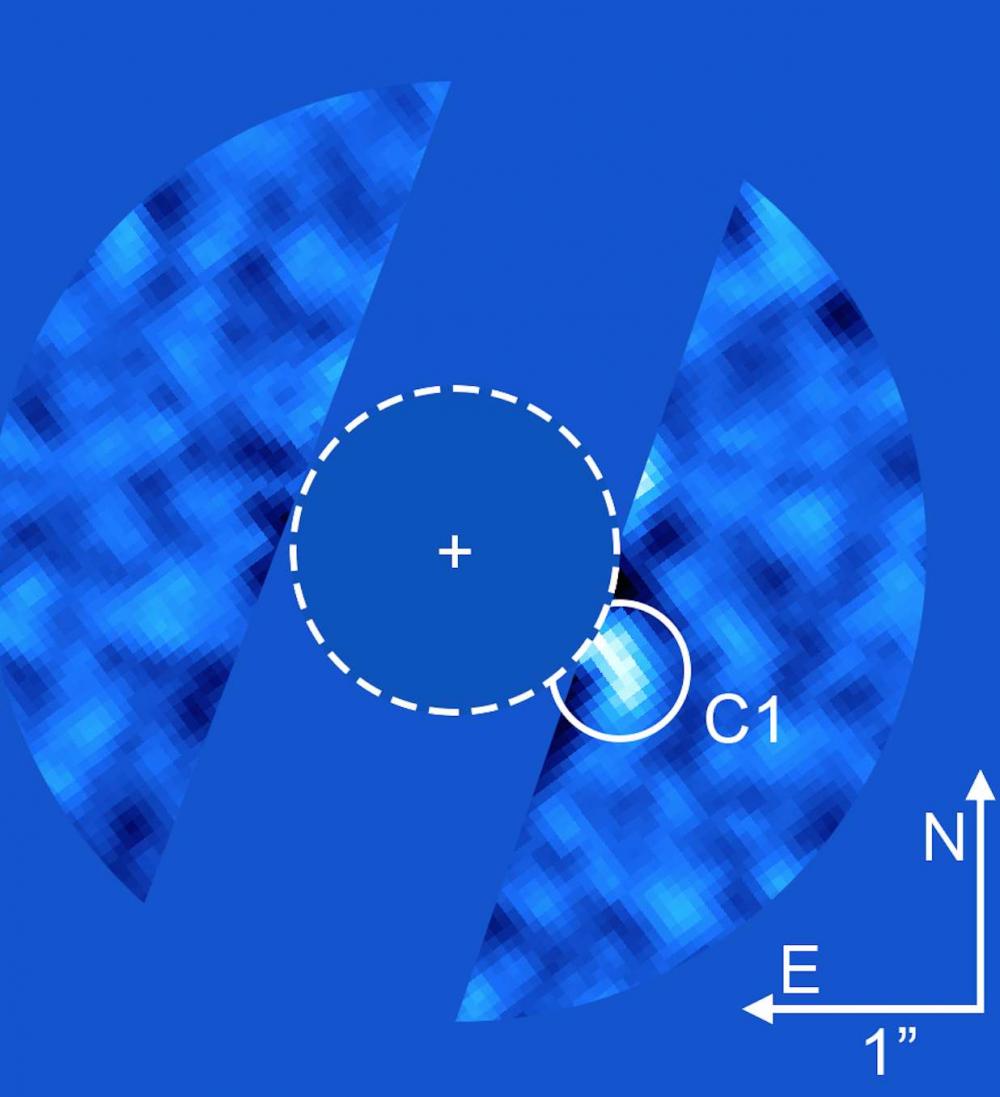 Finding a potentially habitable planet within Alpha Centauri has been the goal of the initiative Breakthrough Watch/NEAR, which stands for "New Earths in the Alpha Centauri Region". Breakthrough Watch is a global astronomical program looking for Earth-like planets around nearby stars. The method described in the research paper provides more than a ten-fold improvement over existing capabilities to directly observe exoplanets. Most studies aimed at exoplanet imaging have used shorter wavelengths, less than 10 microns, stopping just short of the range of wavelengths where such planets shine the brightest.

The team used the Very Large Telescope, or VLT, of the European Southern Observatory in Chile to observe our closest neighbor star system:  Alpha Centauri, a triple star system just 4.4 light-years away. Alpha Centauri consists of two stars – Alpha Centauri A and B – which are  similar to our sun in size and age and orbit each other as a binary system, and Alpha Centauri C, better known as Proxima Centauri, a much smaller red dwarf orbiting its two siblings at a great distance. A planet not quite twice the size of the Earth and orbiting in the habitable zone around Proxima Centauri has already been indirectly detected. Alpha Centauri and A and B could host similar planets, but indirect detection methods such as radial velocity variations are not yet sensitive enough to find rocky planets in their more widely separated habitable zones 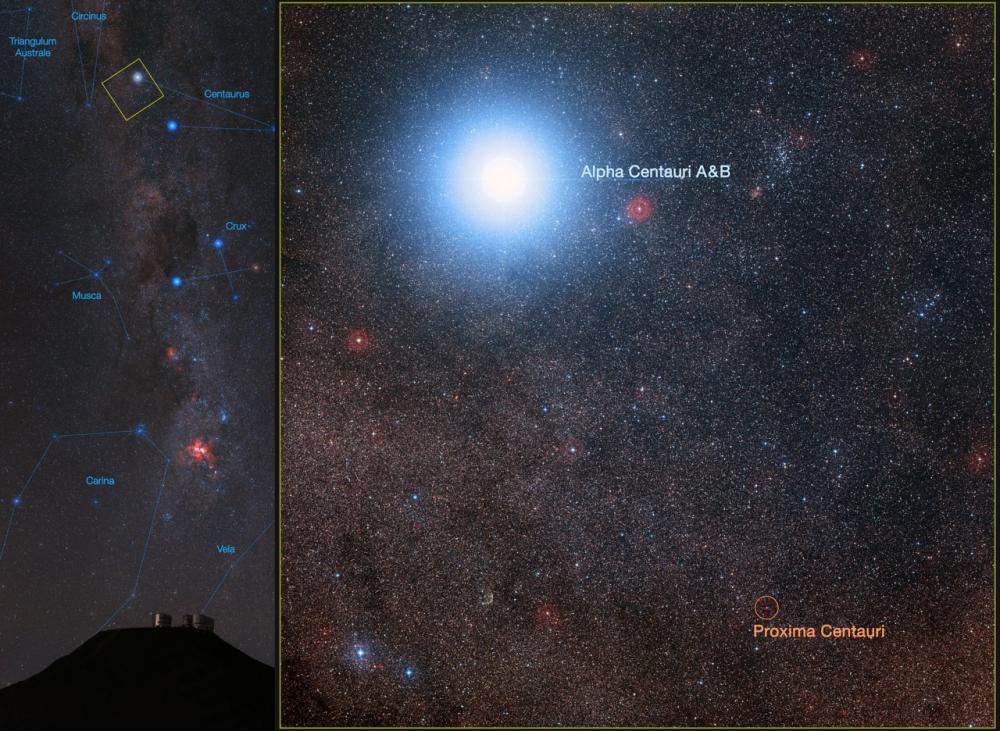 VISIR the mid-infrared instrument built by the the Astrophysical Department of CEA-IRFU, has been retrofitted to the VLT UT4 (Yepun) which is equipped with a built-in adaptive optics sytems. This system, compensating for the atmospheric turbulence, has allowed to reach unprecedented performances in terms of angular resolution and point source sensitivity. In addition, the researchers used a star-light blocking device called a coronagraph that they optimized for the mid-infrared light spectrum to block the light from one of the stars at a time. To enable observing both stars’ habitable zones simultaneously, they also pioneered a new technique to switch back and forth between observing Alpha Centauri A and Alpha Centauri B very rapidly.

The team observed the Alpha Centauri system for nearly 100 hours over the course of a month in 2019, collecting more than 5 million images in the process. CEA researchers contributed to the project by participating to the design of the experiment, providing hardware experience about the VISIR instrument, and finally building the reduction software that allowed to correct for instrumental signatures and apply data selection rules to the 10 Tb of collected data during the campaign.  In the resulting image, there is one point source, called “C1”, that looks like what we would expect from a planet, that cannot be explained with any of the systematic error corrections. Simulations of what planets within the data are likely to look like suggest that "C1" could be a Neptune- to Saturn-sized planet at a distance to Alpha Centauri A that is similar to that between the Earth and the sun. However, without subsequent verification, an instrumental artifact of unknown origin cannot be ruled out. 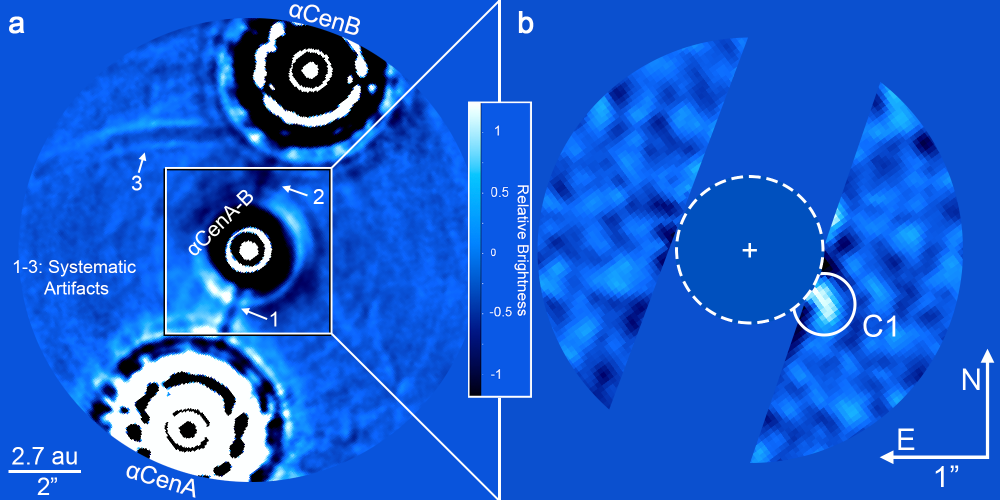 Left : NEAR/VISIR final raw image after sorting out and stacking 72 hours of observation. The squared region outlines the habitable zone around Alpha Centauri A (about twice the orbit of Mars). These regions are contaminated by various instrument artifacts and the stellar light. Right : the zoomed-in final cleaned and processed image after subtracting the stellar light. Regions with instrument artifacts have been masked out for clarity. A persistent point-like signature (“C1”) is detected in all data subsets. Copyright UA.

The next-generation of extremely large telescopes, such as ESO’s Extremely Large Telescope are expected to be able to increase the numbers of nearby stars such that might harbor planets in their habitable zones that could be imaged by a factor of 10. The CEA-IRFU is involved in the design and building of METIS (Mid-infrared ELT Imager and Spectrograph), the future thermal infrared ELT instrument.