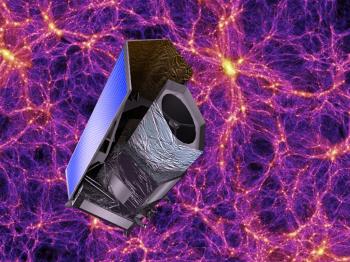 EUCLID will be equipped with a telescope of 1.2 m in diameter with two instruments at focus : the Visible Imager VIS and the IR spectrophotometer NISP (Near-Infrared Spectrometer and Imaging Photometer).
The teams of CEA-IRFU are in charge of the construction of several subsystems of the two instruments:
- The focal plane of the visible imager (FPA - Focal Plane Assembly) and an electronic control box for the instrument (PMCU -
Payload Control and Management Unit).
- The cryomechanism for rotating the filter wheels of the Infrared Imaging Spectrometer instrument
These elements will be integrated into the VIS and NISP instruments during 2017, for delivery to ESA at the end of 2017.

The scientists from CEA-IRFU are also heavily involved in the organization of the " EUCLID Consortium ", an international  collaboration  which already includes 1,000 scientists from 13 European countries and also a US participation. They also play a key role in the definition and development of the science center that will process the huge amount of data obtained as well as in the scientific exploitation of the data.

After its launch scheduled for 2020, EUCLID mission will operate over a period of 6 years to map nearly a third of the sky with great precision, in particular to measure the deformation of the images of galaxies under the influence of the distribution of dark matter in the Universe. These maps will also be used to trace the evolution over time of the dark matter distribution under the effect of dark energy.