When planets are growing
Formation of solar systems: the role of "planets traps" 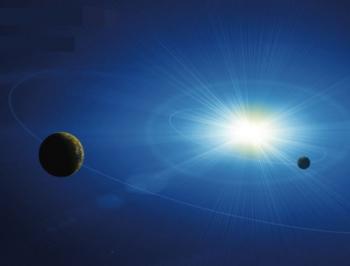 A team from the laboratory "Astrophysics, Instrumentation, Modeling" Paris-Saclay (AIM - CNRS / CEA / Université Paris Diderot) has developed a new model representing the evolution of protoplanetary disks over millions of years. These giant structures made of dust and gas are the privileged place of planet formation due to the presence of what researchers call "traps planets." With this new model, the scientists were able to determine the most favorable places to form the planets. These results are published online in the journal Astronomy & Astrophysics on May 6, 2015.

The planets are born in disks.

It exists outside the Solar System "exoplanets" planets revolving around stars different from ours. Since the discovery of the first exoplanet in 1995, scientists have developed many scenarios to explain the appearance of planets around stars. The one, mostly favoured by the scientists, highlights the existence and role of disks of dust and gas, called protoplanetary disks, within which planets can grow from embryos. To understand the formation of the solar system and extrasolar planets, it is necessary to model the long-term evolution of these discs. The temperature in the midplane of the disk will determine its composition and, by following this composition throughout the evolution of the disk, it becomes possible to determine the conditions for the formation and growth of planets.
By coupling calculations on the dynamics, thermodynamics and disk geometry, the AIM laboratory team has developed a new protoplanetary disk model that allow to follow its evolution over time and to analyze the migration of planetary embryos in it. This model was also used to determine the position of sublimation lines of different species of dust present in the disk, that is to say, the boundary beyond which some of this dust go from solid to gaseous state. 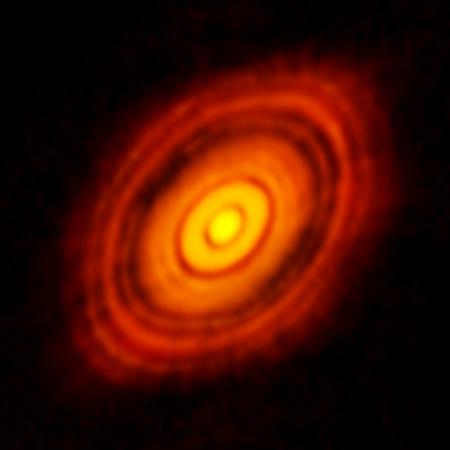 The researchers were able to identify favorable sites for the survival and growth of the "babies" planets by following the migration of planetary embryos that may form in such a disk. These planets embryos will accumulate in areas that, firstly, ensure their survival by preventing them from hitting their star and, on the other hand, favor collisions, allowing them to grow by accretion. These areas, called "planets traps" are located on the dust sublimation lines. Monitoring of these "planets traps" throughout the evolution of the protoplanetary disk, identifies stable areas where the planets will survive and grow, and also allow to distinguish more ephemeral traps that retain embryos only temporarily.
The researchers also demonstrated the essential role of the sublimation line of ice water, which was thought as a sharp and thin region in our solar system. In fact, this line is rather broad. Below this line, form reasonably small planets like Earth, containing silicates in significant quantities and therefore with higher densities. While beyond the ice sublimation line where the water can be in the solid state, these are the regions of formation of giant planets like Jupiter with lower densities. 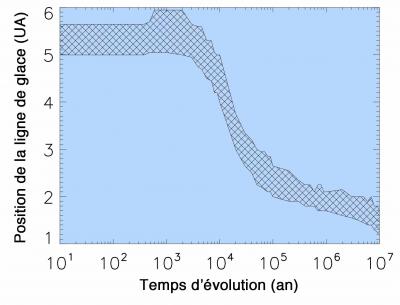 Position of the water sublimation region (ice line) during the evolution of the planetary disk. This area is much larger than expected and is closer to the star after about 10 000 years. Short of this region the solid planets condense while beyond are places where giant gas planets can form. Credit CEA / SAp-AIM.

Eventually, by combining the detailed model of protoplanetary disks evolution with a simulation of the growth of planetary embryos, one would better understand the composition of the hearts of the planets in the Solar system. In addition, future observations of the millimeter and sub-millimeter observatory ALMA will certainly help to refine the information on places where exoplanets form.