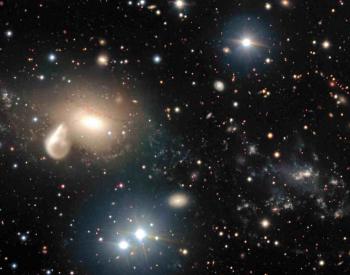 A team of scientists, led by researchers from the Astrophysics Department - AIM Laboratory at CEA-IRFU has revealed that a dwarf galaxy, resulting from a collision of two galaxies about 300 million years ago, could help astronomers to learn more about the cosmic clumps present within many of the star-forming galaxies in the distant Universe which are normally much too distant to be observed in detail by current telescopes. This galaxy, named NGC5291N, was observed with the new spectrograph MUSE recently commissioned at the Very Large Telescope (VLT) of the European Southern Observatory (ESO) and is an unique system that reveals unusual characteristics close to those of the earliest galaxies. These results are published in the journal Astronomy & Astrophysics (in press).

A dwarf galaxy, unique and mysterious result of a cosmic collision about 300 million years ago, is revealed in detail in a new image from the Very Large Telescope (VLT) of the European Southern Observatory (ESO).

The galaxy NGC 5291 is an elliptical galaxy, at a distance of 200 million light years in the constellation Centaurus. About 360 million years ago, NGC 5291 was involved in a dramatic and violent collision with another galaxy, moving at high speed and that passed through its central part. This cosmic crash ejected an enormous amount of gas in the surrounding space which then condensed to form a ring of material around NGC 5291. Over time, the material in this ring  gathered and collapsed into dozens of star-forming regions and several dwarf galaxies, with among them N5291N. 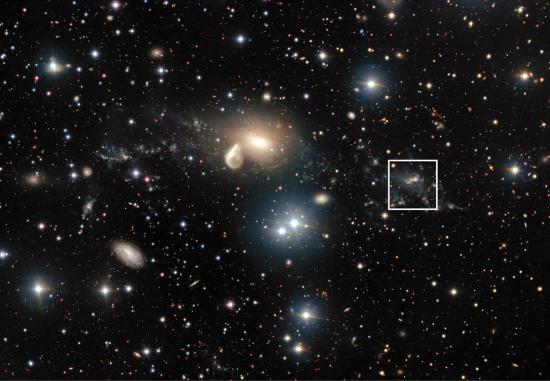 The NGC 5291 galaxy is the diffuse oval orange spot, visible in the center of the image. Dwarf galaxies are also visible in the image as pale blue and white diffuse regions scattered around NGC 5291 in this view of FORS and MUSE VLT instruments. The most concentrated region is located to the right of NGC 5291 (white frame) and is the dwarf galaxy called NGC 5291N. It is the result of an ancient collision of the NGC 5291 galaxy with another galaxy. The NGC 5291 galaxy is also currently interacting more smoothly with MCG-05-33-005, the orange cloud of strange shaped, close to the luminous nucleus of NGC 5291 and named the "Seashell" galaxy because of its unusual shape. ESO credits.

Yet NGC 5291N appears to contain no old stars. The findings, obtained using the new spectrograph MUSE just commissioned on the VLT [1], instead revealed unexpected oxygen and hydrogen emission lines in the outskirts of NGC 5291N. Such emission is typically associated with the formation of new stars, but what was observed is not predicted by current theoretical models. Astronomers suspect that the observed unusual properties of the emission lines may be the result of massive collisions of gas in the region.

To add to the mystery, astronomers found a blue diffuse glow around NGC 5291N that could also be associated with newly formed stars. However, detailed analysis of this light reveal that it is not produced by stars. NGC 5291N actually shares much similarity with the gas concentrations in the early most violent star-forming galaxies in the very distant Universe. 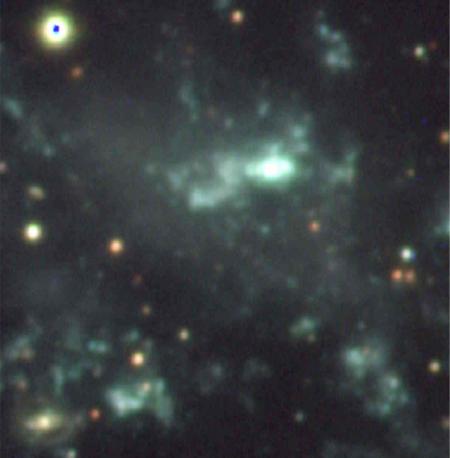 Image centered on the dwarf galaxy NGC5191N region, obtained by the VLT FORS instrument. The dwarf galaxy, visible as the bright white spot near the center of the image is surrounded by a blue-green diffuse light whose origin is still unexplained. ESO Credits

This unusual system has already been observed for several years by a wide range of facilities on Earth, including the telescope of 3.6 meters in diameter at the ESO La Silla Observatory [2]. However, the capabilities of MUSE spectrograph and imager FORS at the Very Large Telescope (VLT) have only now revealed these intriguing new features of NGC 5291N.
According to Jeremy Fensch and Pierre-Alain Duc from the Astrophysics Department - AIM Laboratory who led the study : "Many of the properties of this dwarf galaxy are unexpected and not yet fully explained. It provides an excellent opportunity for astronomers to better describe the properties of these dwarf galaxies formed in abundance early in the Universe's history but that are normally too small and distant to be easily seen by current telescopes. "
Future observations, including those that may be performed in the future at the European Extremely Large Telescope of ESO (E-ELT) 30m diameter under construction, will contribute to resolve the remaining mysteries of this dwarf galaxy.

[2] NGC 5291 was studied by astronomers using ESO’s 3.6-metre telescope at the La Silla Observatory in 1978. These observations revealed large amounts of material in the intergalactic space around the galaxy, which we now know to be the star-forming regions and several dwarf galaxies created from the collapse of the galaxy’s gaseous ring.