The last two lines of the ANTARES detector were connected and powered at a depth of 2500 m on the Mediterranean seabed during the night of May 30, 2008. This brings the number of lines to twelve and completes the construction phase of the largest underwater neutrino telescope ever built.
The lines were immersed a few weeks earlier, close to the other lines that have been tracking cosmic neutrinos since 2006. These particles may be able to tell us more about the most violent phenomena in the Universe.
The event rewards the efforts of the European ANTARES collaboration1 and, more especially, of CEA-IRFU, which has been a major contributor to the project.

The ANTARES telescope is a neutrino detector focusing on two main activities: high-energy astronomy and search for dark matter.

Over the past few decades, astronomy has revealed many objects – some of which are the site of cataclysmic phenomena – emitting very high-energy photons. These objects could be the result of nuclear reactions that also produce cosmic radiation particles – mostly protons – and neutrinos. At very high energy, photons and protons can be stopped by matter, which makes them hard to observe. Neutrinos, on the other hand, are weakly interacting elementary particles that are never stopped nor diverted by the intergalactic media. They are therefore direct messengers of the processes involved in cosmic accelerators. Detecting these particles would open a new window on the Universe, and finally reveal the origin of cosmic rays. 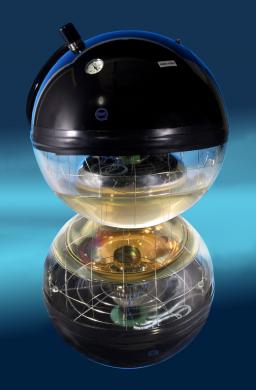 ANTARES could also be used to observe lower energy neutrinos, created by the accumulation of dark matter at the centre of the Earth, the Sun, or our galaxy. The missing mass of the Universe, which accounts for 95% of its total mass, has been the central question in cosmology for the past 70 years. Some of this missing mass could be made up of elementary particles called weakly interacting massive particles – or WIMPs for short. Their existence is predicted by the physics theory referred to as "supersymmetry", which also predicts that they accumulate at the centre of massive objects like the Earth or Sun. WIMPs are both particle and antiparticle. If they were to accumulate, they would eventually cancel each other out, producing a burst of energy and particles, including low-energy neutrinos.

Their very weak interaction with matter makes neutrinos hard to detect. This problem can only be overcome by using enormous detectors, shielded against the cosmic radiation that constantly bombards all sites on the Earth, and constitute a source of background. ANTARES, installed off the coast of Toulon, is protected against this radiation by a natural shield – 2000 m of water! Photodetectors – Antares eyes – are installed in large a volume of seawater to observe the very faint trails of light that "upgoing" muons leave behind them. These are charged particles, similar to electrons, that are produced as the upgoing neutrinos interact with the Earth's crust. The phenomenon can be observed because of the total darkness at these abyssal depths, disturbed only by the faint light from a few bioluminescent animals. ANTARES observes the sky of the southern hemisphere through the globe. This portion of the sky includes the galactic centre, where intense energetic phenomena occur.

This challenge was taken up by CEA and CNRS teams in 1996. After a long period spent in studying the properties of the marine environment, the first detection line was immersed in March 2006.
Today, 885 "eyes", together with the electronic equipment designed and built at the IRFU to read and process data, are strung out in threes along 12 flexible lines, 450 metres high, higher than the Eiffel Tower. The lines are anchored to the seabed, covering an area as large as four soccer fields. Half of them were assembled at the IRFU in Saclay, and the other half at CNRS/CPPM in Marseilles. 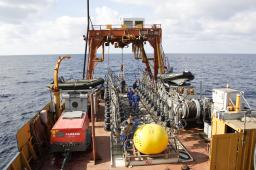 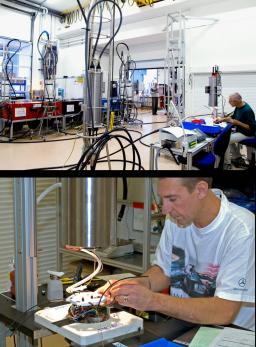 Although the detector has only just been completed, physicists have already extracted, from the data acquired with the lines already in operation, evidence for several hundred neutrinos, produced by the interaction of cosmic radiation in the atmosphere on the other side of planet. A few neutrinos from a distant source in the Universe might well be hidden among them, and they could be revealed from the accumulation of more data.

ANTARES is also a permanent, multidisciplinary, underwater, scientific infrastructure, already equipped with instruments. Some of these are grouped on a dedicated thirteenth line: seismographs, instruments for measuring the temperature and oxygen concentration, a camera on the look-out for deep-sea fauna, and so on. These instruments will help to find answers to questions raised by other scientific fields, such as oceanography or climatology.