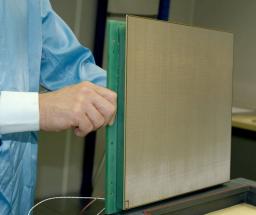 The Micromesh Gaseous Structure (Micromegas) detectors designed and developed by IRFU researchers have been used increasingly over the past few years in the field of particle and radiation detection for physics research, and show strong potential for nuclear, biomedical and industrial instrumentation applications. Recent R&D efforts have led to the development of new manufacturing processes that improve the performance and scope of application of these detectors. The second generation of Micromegas detectors is already being used in several international physics experiments that have yielded excellent results since the fall of 2008.

Developed since 19951, the Micromesh Gaseous Structure detector concept has resulted in tens of international publications and conferences, three CEA patents, and a large number of applications for fundamental2 and applied3 research experiments.
The Micromegas detector is an ionization-based gas detector comprising two characteristic regions separated by a micromesh. In the conversion region, the charged particles to be detected ionize the gas, and the electrons thus released are guided towards and through the micromesh and into the amplification region by a moderated electric field. In the amplification region, a very high electric field establishes an avalanche regime leading to a significant increase in the number of primary electrons and producing an electric signal measurable at the anode. The detector gain depends directly on the distance between the micromesh and anode, and controlling the geometry of the amplification region (a few tens of microns thick) is crucial for achieving energy resolution. 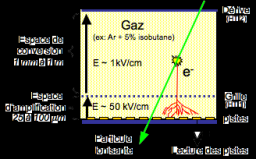 Functional diagram of a Micromegas detector

In the first generation of detectors, conventional mechanical assembly techniques were used to implement the micromesh and to position the planes forming the different sensitive regions. These techniques impose limitations on the size and shape of the detector, and require a large number of operations. Within the framework of a joint development program between IRFU and CERN, new methods have been developed to simplify construction and thereby enlarge the scope of possible applications. Efforts focused on producing the amplification region as a single piece using the newly developed "bulk" and "microbulk" methods.

With the bulk method, the industrial lamination and photoengraving techniques used for electronic printed circuits are used to produce the main components of the detector core in a single piece. A film constituting the amplification region is created through a series of specific operations (lamination of photosensitive film and textile mesh, insolation, development). An array of spacer columns regularly distributed on the surface rigidly secures the micromesh to the base printed circuit carrying the readout anodes and thereby maintains a constant distance between the latter. This semi-industrial assembly process allows the regular production of large, stable and inexpensive detector modules, in thin and flexible configurations.

With the microbulk method, the amplification and measurement region of the detector is produced using a thin kapton film metallized on both faces. Since the micromesh is formed one one of the metallized faces of the film, this method does not require the textile mesh lamination operation required by the bulk method. By eliminating the thickness and irregularity limitations associated with the metal textile, this technique enables the production of even thinner detectors with excellent energy resolution.

Several applications have recently benefited from these technological developments:

Micromegas detectors for the CAST experiment

The CAST experiment is designed to study the possible emission of axions from the Sun's core. The principle consists of orienting an LHC magnet (magnetic field: 9.4 tesla, length: 10 meters) toward the Sun. If the Sun emits axions, these particles interact with the virtual photons of the magnet and produce real soft photons with an energy of approximately 3.5 keV. Initially, the project used one Micromegas detector, one CCD and two TPC-type hard-wired detectors. Encouraged by the performance of the newly developed detector, the project team decided to replace the two TPC detectors with two Micromegas detectors. The results obtained since the start of the year with three Micromegas detectors are truly remarkable: excellent stability and an unprecedented background noise level (<<10-5/keV/cm2/s). Both methods described above are used (bulk and microbulk).

In the three TPCs for the Japanese T2K neutrino oscillation experiment, the end detectors (with a total sensitive surface area: 9 m2) are composed of mosaics of 34x36 cm2 Micromegas modules produced using the bulk method.

These detectors are currently in the production phase and have given full satisfaction since their initial integration in September 2008 at the TRIUMF facility (Vancouver), where they are being tested with a test beam prior to on-site installation in Japan as of 2009. IRFU researchers are responsible for the design and production of the entire signal processing chain (specific front-end integrated circuit, proximity electronics, acquisition software, trace reconstruction software) for the 120000 measurement channels implemented. 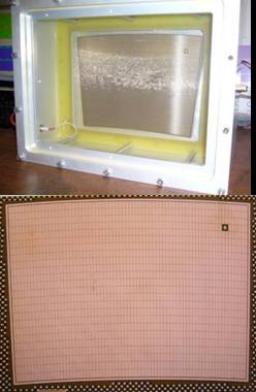 Within the framework of R&D work for the future electron colliders considered for particle physics experiments (ILC, CLIC), the European EUDET program is currently preparing the test environment for a large prototype of a TPC-based trajectograph. The Micromegas detector module (produced using the bulk method) was successfully tested in October 2008 at the DESY facility (Hamburg). This detector aims to achieve extremely ambitious spatial resolution values (down to 50 µm) and incorporates advanced resistive anode techniques for optimal charge distribution and trace reconstruction. An even more advanced microTPC detector concept combining a Micromegas module with a VLSI pixel integrated circuit for electronic signal measurement and analysis (CERN TimePix circuit) is also being implemented.

Cylindrical detector for the CLAS12 experiment

A prototype central trace detector for the future CLAS12 experiment was tested on-site at the Jefferson Lab (Virginia) in October 2008. A new, thinner configuration produced using the bulk method has enabled the development of a curved prototype detector capable of adopting the cylindrical conformation required and presenting a very low mass during passage of particles These tests have validated the operation of the detector under high magnetic field, with magnetic effects on spatial resolution effectively limited by the electric field applied to collect the charges.

Different views of the flexible Micromegas module for the CLAS12 experiment

Mechanical concept of the neutron flux monitor, and testing with the GELINA neutron source

A new extremely thin neutron flux monitor produced using the microbulk method and intended for the CERN NTOF experiment was validated in October 2008 using the GELINA neutron source at the GEEL facility (Belgium). The monitor tested comprises two microbulk components arranged in sequence and carrying boron and uranium deposition layers for neutron conversion. The excellent temporal resolution provided allows accurate time-based qualification of energy spectra. The microbulk configuration has been made even thinner for this application, providing the detector with excellent transparency.

On November 10th, the detector was successfully installed in the CERN NTOF system for testing under beam conditions (first beam in 4 years).

TPC prototype for detection of heavy ions (from protons to uranium)

Within the framework of current studies on the future TPC for the R3B project (Reactions with Relativistic Radioactive Beams), prototype detectors produced using the bulk method were tested on-site in November 2008 at the FAIR nuclear physics facility (GSI, Darmstadt). Characterized by means of heavy carbon and nickel ion beams, these detectors are designed to explore the resistive anode concept with a view to improving shared-charge spatial resolution and electrical breakdown resistance.
These first prototypes exhibited excellent behavior under beam conditions (breakdown resistance, signal quality, gain uniformity). 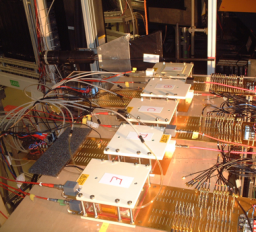 In order to coordinate future R&D efforts, the international community of gaseous detector developers recently formed a consortium within the framework of the RD51 project supervised by CERN. IRFU teams are actively involved in this initiative, which encompasses the various gaseous microstructure detector technologies (GEM, Micromegas).
IRFU research activities on Micromegas detectors are mainly conducted by the Electronics, Detectors and IT Department. IRFU experimental physicists participate in R&D and specification initiatives and then assume scientific responsibility for detector development projects with a view to subsequent application in international particle and nuclear physics experiments.