Higgs Boson and supersymmetry: the Tevatron has nearly nailed it

Since researchers have been confronting the standard model of particle physics with experimentation, nothing has been able to shake it. Of all particles it describes, only the Higgs Boson has not yet been discovered. But the standard model is probably not the ultimate theory: it does not cover gravitation and numerous experimental observations remain unexplained.

A new invariance, called supersymmetry, was suggested during the 1970s. It associates particles with different spins (integer spin bosons and half-integer spin fermions). It is possible to create supersymmetric extensions of the standard model, elegantly resolving the mathematical problems that emerge during calculation of the Higgs Boson mass.

D01 experiment accumulating data from Fermilab's Tevatron (United States) just published2 results relating to the Higgs Boson research needed for supersymmetric extensions to the standard model. All currently available data has been analysed, representing more than one and a half billion events.

In the Tevatron, a high-energy proton-antiproton collider, large quantities of Higgs Bosons could be produced if they are sufficiently light. A useful channel for detecting them is their production associated with a bottom quark3 (b), H0b. In 90% of cases, supersymmetric light Higgs Bosons are supposed to disintegrate into two bottom quarks. That is why research in this area is based on identifying those events involving at least three jets4 resulting from bottom quarks in the final state. 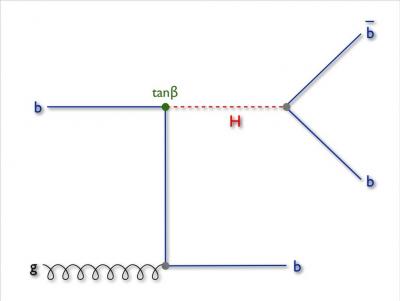 One of the major difficulties - insurmountable until a short time ago - is the magnitude of the hadronic background noise caused by the large-scale jet production, typical for a collider like the Tevatron. Several members of the D0 team at IRFU/SPP (Institute of Research into the Fundamental Laws of the Universe/Particle Physics Department) worked on this long-term project between 2002 and 2008. Using optimal techniques of bottom quark recognition and evaluation of hadronic background noise on all available data, they were able to conclude that the H0b signal was absent (see Figure 1) and define several parameters of supersymmetric models that had been inaccessible to experiments before.

Research for supersymmetric Higgs is continues

The accumulation of new data from the Tevatron, enhanced by improved luminosity, is driving research on supersymmetric Higgs Bosons forward, particularly in rarer cases where Higgs disintegrate into a pair of tau leptons, a very heavy cousin of the electron. Although less frequent than the above-mentioned channel, it offers a cleaner "signature" for optimising these studies. SPP's D0 group is analysing this data, currently the subject of a thesis.

This research into supersymmetric particles is also continuing with the experiments in the Large Hadron Collider (LHC), which will explore an even wider area of the supersymmetric extensions of the standard model. 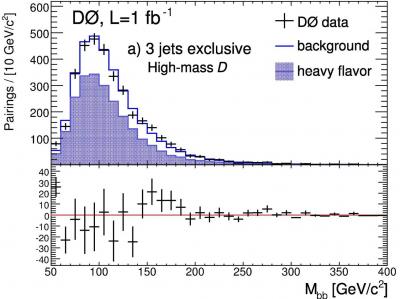 The above figure represents the distribution of the invariant mass of two b quark jets in the channel of three jets. The crosses represent the data, the blue line represents the standard model prediction, including the response of the detector, and the hatched area only contains the contribution from heavy flavour production (b and c quarks). The bottom part of the figure shows the difference between the data (crosses) and the background noise (blue line) according to the invariant mass. Only statistical errors are indicated. No significant difference is observed.

1.      D0 experiment in the Tevatron, a proton-antiproton collider located at the Fermilab site close to Chicago.

3.      The b is one of the heaviest quarks described by the standard model. It is a constituent of the "bottom" or "beauty" particles. At high-energy it becomes active in protons and anti-protons.

4.      Quarks can only be observed in their free state. After collision between two quarks, one from a proton and the other from an anti-proton, they each transform into hadrons, which can be observed through association with other quarks or anti-quarks. It can be said that the quarks get "dressed" by producing a jet of hadronic particles.