Antares: first views of the sky 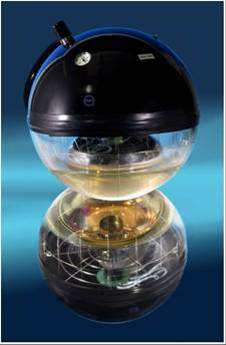 It has now been more than two years that Antares1, the underwater telescope installed in the depths of the abyssal plains 2500 m under the Mediterranean, is scanning the skies through the Earth in search of neutrinos. Over a thousand of them have already been observed until today, making it possible to establish the first views of the heavens to search for high-energy cosmic neutrinos, particles that may be able to teach us more about the most violent phenomena in the Universe.

Neutrinos are particles that interact very little with matter. Emitted by the most violent cataclysms of the Universe, they could prove that these phenomena are responsible for cosmic rays, mainly protons, which are constantly bombarding the Earth. These protons actually reach us after having been diverted from their paths by intergalactic magnetic fields, which prevents us from identifying their origin.

Their very weak interaction with matter makes neutrinos hard to detect. This problem can only be overcome by using enormous detectors, shielded against the cosmic rays. Antares, installed off the coast of Toulon, is protected against this radiation by a natural shield - 2000 m of water. Work on the detector took two years and its deployment was achieved in May 2008. Today 885 "eyes", together with the electronic equipment designed and built by CEA-IRFU (Institute of Research into the Fundamental Laws of the Universe) to read and process the data, are strung out in groups of threes along 12 flexible lines 450 m high. These lines are higher than the Eiffel Tower and are anchored to the seabed covering an area as large as four football fields.

The eyes of Antares can see the very faint trails of light left behind by muons, charged particles similar to electrons.  Muons are produced as the upward going neutrinos interact with the Earth's crust. The phenomenon can be observed because of the total darkness at these abyssal depths, disturbed only by the faint light from a few bioluminescent animals. Antares thus observes the sky of the southern hemisphere through the globe.

The muon is emitted in the same direction as the original neutrino and by determining its direction it can be traced back to its source.

First view of the sky created from data collected in 2007 and 2008 with an increasing number of lines making it possible to observe roughly one to three neutrinos per day. This map includes one thousand neutrinos, essentially produced by the interaction of cosmic rays on the side of the world opposite to the telescope. The background in different shades of grey represents the detector's field of vision (dark grey: maximum view under the detector; white: invisible area above). The galactic centre is in the middle of the map. (Note: This map is for illustrative purposes only; it has been modified to make any physical interpretations impossible until the correct data have been analysed by the Antares collaboration). 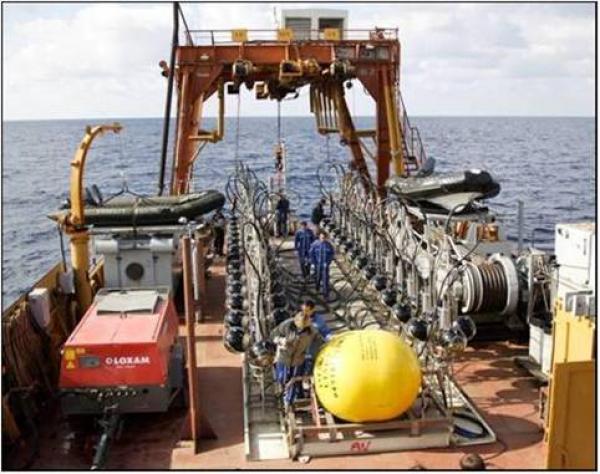 The search for neutrinos already started well before the detector was completed. Muons caused by cosmic radiation make tracking neutrinos difficult because they remain dominantly visible even behind the protective shield of 2000 m of water. They may at times be identified as upward going particles. This background noise is now under control, enabling physicists to isolate the upward going muons in the detector. These muons are produced through interaction of the only known particles capable of travelling through the terrestrial globe: neutrinos.

These neutrinos are predominantly created by cosmic rays in the atmosphere on the side of the other side of the world opposite to the detector. For this reason they are called "atmospheric neutrinos"; they come from all directions under the detector. Antares has currently recorded over a thousand of these events. Thus, the search for the source of cosmic neutrinos can now get started: on the sky map, these will be visible as localised accumulations of events, which cannot be attributed

No source has been detected yet, but Antares has already gone beyond all experiments that have been conducted so far scanned this part of the sky for neutrinos. Each passing neutrino just may come from a source in the distant Universe.  The only way to capture them is by collecting data.