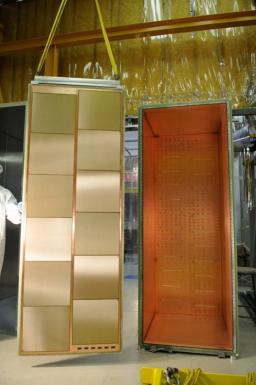 Engineers and physicists from IRFU have successfully assembled and commissioned three large chambers designed to reconstruct charged particle tracks. The chambers will characterize the neutrino beam used in the T2K (Tokai to Kamiokande) experiment. They are the first large Time Projection Chambers (TPCs) to be equipped with micromesh gas detectors (Micromegas). The chambers have a very large sensitive area (nearly 9m²) and a correspondingly high number of electronic channels (124,000). IRFU built the entire detection system of the three TPCs, comprising 72 Micromegas detectors and all the front-end electronics. Engineers from SEDI, a department specialised in detector, electronics and information technology, specially designed a new chip called AFTER and two printed circuit boards for sending digitised signals to the acquisition system via an array of 72 gigabit optical links. The three chambers were tested with a particle beam at TRIUMF in Canada and have been installed in JPARC (Tokai, Japan) at the end of 2009.

The first beam and cosmic ray tests demonstrated that tracks could be reconstructed with the required degree of precision. This achievement represents a major step forward in the construction of a vital detector for the T2K experiment.

The TPC are now detecting tracks produced by neutrino interaction in the near detector of T2K and provide superior information to measure the momentum and to identify these particles.