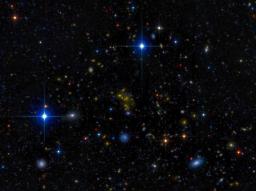 One of the areas of the sky observed by SNLS through the Canada-France-Hawaii telescope Megacam camera. The area shown represents 2% of the total area covered and encompasses some 20,000 galaxies